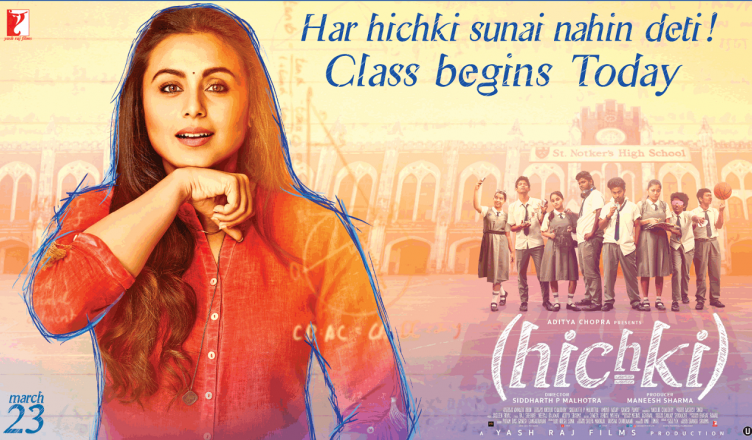 No human being is perfect. Sadly, some are more ‘imperfect’ than others. A few of them suffer from conditions that make them stand out and are at times not even considered ‘normal’. However, many of them have still succeeded and scored big time in life. Hichki is a slice-of-life flick that also throws light on a lesser known nervous system disorder. However, the film is a lot more than the disorder and the manner in which it encompasses a range of issues makes for a great watch!

The story of the movie: Naina Mathur (Rani Mukerji) suffers from Tourette syndrome, a nervous system disorder characterized by tics. Yet, she wants to be a teacher. She approaches one of the most elite schools in the city, St Notker’s, for work. The management ideally is not ready to employ her in their school since they fear her constant hiccups and tics will be ridiculed by students and that they would not take her seriously. But then, it’s decided to give her a chance to teach underprivileged students who were admitted in the school under the Right To Education act. These students come from impoverished background and are quite brash. Naina gladly accepts the offer, thinking that they are after all children and there’s nothing to worry. However, she is in for a shock when the students behave quite badly with her. Moreover, the condition makes it worse for her.

Hichki commences on a lovely note as the character, her condition and how she has understood to come to terms with it is beautifully established. The flashback of Naina, especially the portion of Mr Khan (Vikram Gokhale) is lovely. The film obviously gets better once viewers get acquainted with the notorious class of 9F. How these students harass Naina and how she refuses to give up is interesting to see. The intermission point arrives at a significant point and post interval, the fun continues. Apart from the fun, the film also has some lovely emotional moments that manage to touch a chord. But sadly, at a few places, it goes a bit off in this department. For instance, Naina’s relationship with her father Prabhakar (Sachin Pilgaonkar) is not entirely convincing. Also, the film seems dragging and a bit repetitive especially the Harsh (Aatish Mayar) and Akshay (Rohit Suresh Saraf)’s conflict. But the film makes up for it in other areas. It’s lovely to see Naina and Mr Wadia’s (Neeraj Kabi) ‘tussle’. The climax is a bit tensed and is handled well. The final sequence is beautiful.

Although the supporting actors play an important part, there’s no doubt that Hichki belongs to Rani Mukerji. The actress is the soul of the film and with her marvelous performance, she takes the film many notches higher. She displays the conditions and the associated nervousness ably. Her never-say-die attitude is quite endearing and surely, it’s a performance that is bound to win hearts! Neeraj Kabi, who has always been a fabulous actor, is no exception. He effectively portrays the ‘villain’ in the story. But he gives his best in the finale. In a crucial role, through his mere eyes, he says a lot and that’s commendable. Shiv Subrahmanyam (Principal) delivers a very effective performance and he looks convincing as a principal who’s willing to take risk but only till an extent. Sachin Pilgaonkar is quite okay while Supriya Pilgaonkar (Naina’s mother) gives a very touching performance. Vikram Gokhale is excellent in the cameo. Hussain Dalal (Vinay) is lovely but looks quite fake in the scene in the pre-climax where he’s all tears. Asif Basra (Shyamlal) is fair.

Talking about the students, Harsh Mayar takes the cake. It’s unbelievable that the cute kid of I Am Kalam is able to play this role, which has a bit of negative shades, so well. Rohit Suresh Saraf leaves a mark. Jannat Zubair Rahmani (Natasha, the bright 9A student), who’s already a big name in television, looks cute and does well. R⁪iya Shukla, last seen in Nil Battey Sannata, is quite fair. Benjamin Yangal, Kalaivanan Kannan, Jayesh Kardak, Poorti Jai Agarwal etc all deliver a fantastic performance.

Jasleen Royal’s music is not of chartbuster variety but is entertaining. Madamji Go Easy is the most memorable and catchy. Oye Hichki is peppy and touching. Khol De Par is well sung and written. Teri Dastaan is good but doesn’t register. Phir Kya Hai Gham is fitting and plays in the opening credits. Hitesh Sonik’s background score is exciting, despite lacking the dramatic effect. Avinash Arun (director of Killa)’s cinematography is simple and very neat. The school’s classrooms, corridors, playground and even the slum scenes are very well captured. Meenal Agarwal‘s production design is apt, especially in the science project sequence. Shweta Venkat‘s editing is sans complaints.

Hichki is based on the book ‘Front Of The Class’ by Brad Cohen and Lisa Wysocky. Anckur Chaudhry, Siddharth P Malhotra, Ambar Hadap and Ganesh Pandit‘s story is very promising and novel as the awareness about Tourette syndrome is negligible. Screenplay is even better as the film makes a parallel between the life of Naina and the students and how both sides are in a way suffering from societal pressures. And this aspect is brought out very well. Anckur Chaudhry and Raaj Mehta‘s dialogues are a bit filmy but they manage to impress nevertheless. Siddharth P Malhotra‘s direction is simplistic and to the point. Despite too many characters, subplots etc, he manages to retain the focus on Naina and the students. He goes off track at a few places as mentioned above and the solutions shown in the film are too good to be true. But as a film, it works and with his execution, he touches hearts. And that’s very important.

On the whole, Hichki is an entertaining and touching saga and is embellished with some brilliant performances. Rani Mukerji emerges as the best performer in the flick and her performance surely deserves to be seen and applauded. The film is bit unconvincing and goes into the ‘too-good-to-be-true’ zone at places but overall, it gives a good time and few sequences are very touching. It’s a perfect family entertainer for the urban target audience!

One thought on “Movie Review: HICHKI by FENIL SETA”