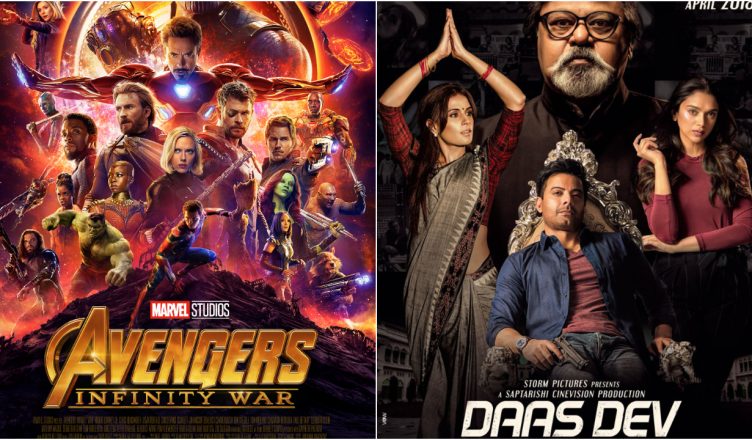 DAAS DEV TO GET CRUSHED THANKS TO THE AVENGERS TSUNAMI!

It’s going to be one of the most significant Fridays of the year. Avengers: Infinity War, the world’s most awaited film, has generated tremendous excitement in India as well. It’s a part of the Marvel Cinematic Universe and the series has become big in India after The Avengers released in 2012. Moreover, Iron Man 3 [2013] was also a big success, despite not being a film of a group of superheroes, a factor that had increased the excitement for The Avengers. The new Avengers film is very exciting since it has more than a dozen superheroes, including Spider-Man, Guardians Of The Galaxy characters, Doctor Strange, Black Panther etc. To witness all of them team up against a common enemy would be something to watch out for.

The advance of this film started on Sunday in India and the response was huge. It’s all set to take the biggest openings for a Hollywood film and there’s a possibility that it might cross the 25 crore figure of Baaghi 2’s opening day. Baaghi 2 is the biggest opener of the year so far and if Avengers: Infinity War will cross this figure, it would shock and awe the trade and industry. Once the historic weekend and first week is over, it depends on the response. That would ultimately decide if Avengers: Infinity War would be able to cross the lifetime figures of 187.98 crore of The Jungle Book, which is the biggest Hollywood blockbuster of India.

It’s also important to note that the dubbed versions play a big role in ensuring that Hollywood films become a success. Otherwise, the English version and fans of Marvel can’t help in taking the film cross 100 crore, even though their number is sizeable. Thankfully, Avengers is a successful Hollywood franchise, even among the masses. And looking at the advance sales of the dubbed versions of Avengers: Infinity War, it seems like that the masses are also going to lap up this new film happily.