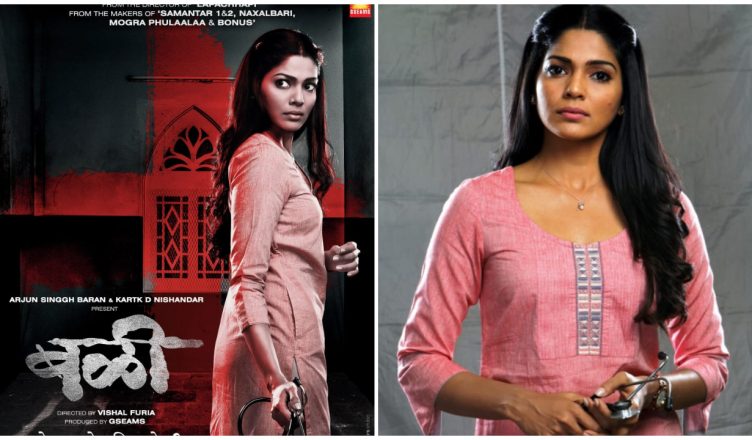 One of the most beautiful and talented actresses in the Marathi film industry, Pooja Sawant, is all set to impress her fans once again with her appearance in the forthcoming Marathi film Bali. Pooja is playing a doctor in this horror flick.

Produced by Arjun Singgh Baran and Kartik D Nishandar of GSEAMS (Global Sports Entertainment and Media Solutions Private Limited), Bali is all set to release on April 16. Bali has been directed by Vishal Furia, and features Marathi superstar Swwapnil Joshi in key role.

Known for her rom-coms and dramatic films, Pooja Sawant has been featured against one of the most successful actors from the film industry, Swwapnil Joshi. Bali is her second film with director Vishal Furia after Lapachhapi, which was applauded by audience and critics as well. Producer GSEAMS released a fresh poster of the film featuring Pooja holding a stethoscope in her hand and giving an intense look.

Speaking about her role in Bali, Pooja says, “Yes, I am a part of Vishal’s second Marathi film as well. It is always great to work with a director who has a clear vision and knows what he is upto. Being part of the film is icing on the cake as I am sharing the screen with Swwapnil Joshi for the first time. I always wanted to work with Swwapnil, one of the most talented actors from the industry.”

“It has been a great experience working for Bali, for two reasons. Firstly, Vishal is a director who knows how to carve out 100% of the capacity of the actors he is working with and secondly, the role I am playing in the film. The character of the doctor I am playing is equally important and an integral part of the story. Like his first successful thriller Lapachhapi, Vishal has done a fabulous job as a director. Believing his directorial ability witnessed myself during making of Lapachhapi, I immediately said yes to him when Vishal asked for this film,” the actress said.

Pooja has proved her talent by playing characters with different shades in the films like Kshanabhar Vishranti, Dagdi Chawl, Bonus, Subhash Ghai’s Hindi film Vijeta among others.

Talking about Bali, Pooja said, “I am someone who, even during daytime, will watch a horror movie with all windows and doors of the house open! But after Lapachhapi, things have changed a bit. I have not only gained confidence to work in the horror films but have also started enjoying watching them. Lapachhapi was a turning point in my film career.”