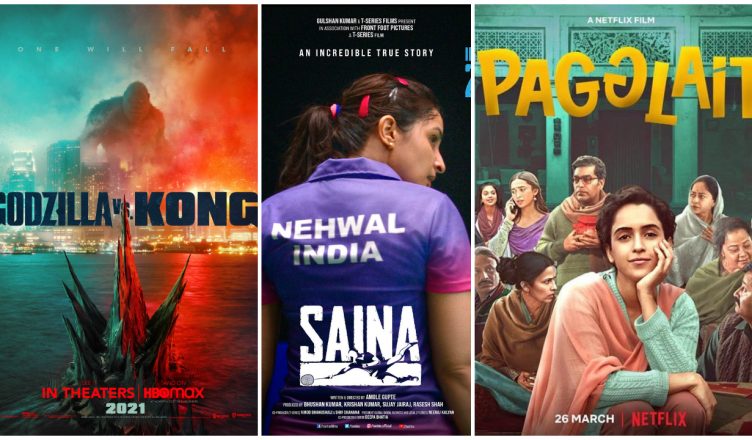 The Holi weekend is a few days away and it’s a time when exciting films usually release. What’s interesting is that on the second day of Holi, many theatres are shut till 1:00 or even 4:00 and 6:00 pm. But the occupancy is superb once cinemas open for the day. That’s the reason some big films have released on the festival in the past like Badrinath Ki Dulhania, Kesari, Baaghi 3 etc. This year, despite the Coronavirus scare, 3 films were scheduled to be released. One of them, Haathi Mere Saathi, has been postponed indefinitely. It’s a jungle adventure film starring Rana Daggubati, Pulkit Samrat and Zoya Hussain. It’s a tri-lingual film and interestingly, it’s Southern versions – Kaadan (Tamil) and Aranya (Telugu) – are all set to release, as per the schedule, on March 26.

The other two films of this week are as follows: 1. GODZILLA VS KONG: This Hollywood film is a part of the Monsterverse of Warner Bros and Legendary Pictures. The first three films in this series were Godzilla, Godzilla: King Of The Monsters and Kong: Skull Island. Godzilla vs. Kong is the fourth instalment and as the name suggests, it’s about two gigantic monsters clashing with each other. The trailer is grand and promises to be a big screen spectacle. What has also added to the film’s buzz is the memes. The film was supposed to release on March 26 but 2 weeks ago, it came to light that Warner Bros India has preponed it’s release by 2 days. So it releases today in a full-fledged manner. The hype is there for the film. Also, it can work in dubbed versions as the masses would love to see the fight between Godzilla and Kong. However, this is not a series that has a fan following like Marvel. The Godzilla films have got good to average response from most moviegoers. Also, the mid-week release might result in a not-so-huge opening. Still, it can open at around Rs. 1 crore. If the response is great, then collections can pick up from Friday evening. If the 5-day weekend is in the range of Rs. 6-10 crore, it’ll be great and if it goes beyond the Rs. 10 crore mark, it’ll be a huge feat for the film.

2. SAINA: As the name suggests, it is the biopic of Saina Nehwal, the legendary Indian badminton player. It stars Parineeti Chopra in the lead role and is directed by Amole Gupte. At one point, Shraddha Kapoor was supposed to play the lead part. She had even begun the prep and the makers had released those pictures as well. But due to date issues, she had to leave the project. That’s when Parineeti stepped in. The trailer is decent and it can be an entertaining and inspirational fare. The buzz, however, is very limited. The opening might be in the Rs. 1 crore range and it might be even less. If the word of mouth is positive, it can see a huge jump. With theatres shut in Punjab and some cities under lockdown, the collections can get affected. Saina releases on March 26.

Finally, Pagglait releases on Netflix on March 26 as well. It stars Sanya Malhotra in the lead role along with Sayani Gupta, Raghubir Yadav, Rajesh Tailang, Ashutosh Rana and others. The trailer is quirky but not that impressive. It remains to be seen if the film proves to be better than its promo.