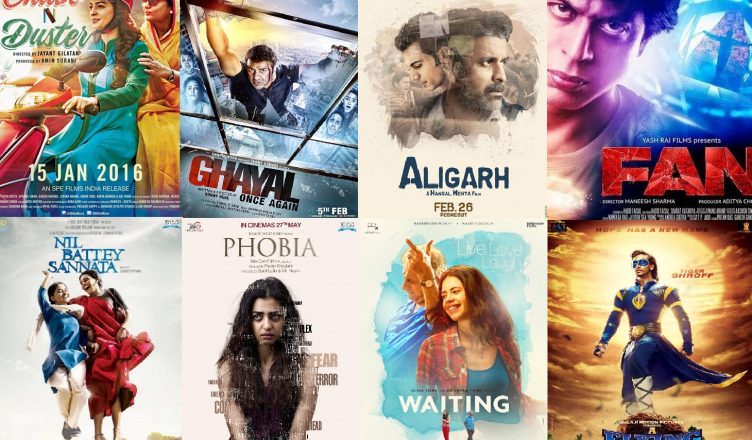 There were several films this year that touched our hearts and entertained the movie buff in us. But business-wise, these films faltered badly. This Filmy Fenil special feature presents a list of 8 films which we feel should have done better at the box office:

Chalk N Duster
This was a sweet, simple film that beautifully tells the problems that plagues our education system. Yes, it had some filmy, unconvincing moments but the essence of the film was lovely and easy to decipher. Moreover, it had a solo release on January 15, 2016. Ghayal Once Again was to release on the same day but got pushed. Yet, Chalk N Duster failed to cash in on it.

Ghayal Once Again
At times, the films don’t fail, it’s the budget that does. This applies well to Ghayal Once Again that had a huge cost to recover (reportedly, Rs 50 crore). Again, this was not a fitting sequel to the iconic Ghayal but it had some really enjoyable moments. The single screen viewers went into frenzy in certain sequences.

Aligarh
Manoj Bajpayee gave one of his greatest performances of his career in Aligarh, based on the life of a controversial homosexual professor in Aligarh Muslim University. The slow-moving film sadly dealt with a not-so-exciting subject which is the reason why its collections were disastrous

Fan
Fan was full of loopholes. However, the action scenes were a treat. In fact, Fan was one of the best action films to have come out of Bollywood. To see a SRK entertainer not even crossing 100 crore was a huge disappointment

Nil Battey Sannata
This was one of the surprises of the year. The film did pick up after a very, very bad first day but it was just not enough. It was even tax exempted in Uttar Pradesh and Delhi but again, it was not a typical entertainer and hence, viewers gave it a miss.

Phobia
Phobia was a well-made thriller and even had a dash of horror, which added to the impact in certain scenes. Radhika Apte does a brilliant job. How it made less than 4 crores at the box office, despite great reports, is baffling

Waiting
Waiting obviously didn’t seem like a film that would be a hit at the box office. It seemed like a nice, genuine effort but it exceeds expectations. It turned out to be quite a touching film. While the response from audiences was very positive, it didn’t translate into healthy box office numbers.

A Flying Jatt
This film goes wrong at a lot of places. But for the average Indian who craves entertainment and escapism from films, A Flying Jatt was a film to watch out for. Moreover, it was a superhero film and hence, the kids too should have come out in large numbers. Sadly, that didn’t happen especially when viewers have seen better superhero films, in terms of execution, content and effects, from Hollywood. Interestingly, the film does extremely well on television which shows that audiences gave the film a thumbs up, but only when it was out of theatres, sadly.