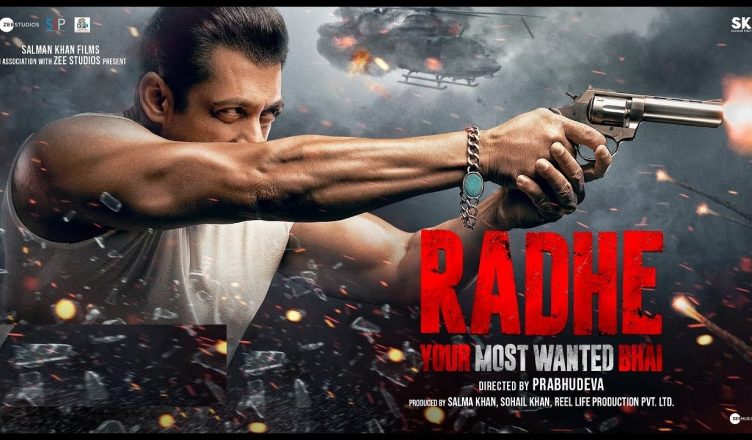 The wait is over. Radhe – Your Most Wanted Bhai, one of the biggest and most awaited films of 2021, is out. The film has constantly generated eyeballs since the time it was launched. The constant updates about the shoot and in recent times, the promotional material and the decision to release the film in cinemas as well as on digital has ensured that the film remained in news constantly. Sadly, Radhe – Your Most Wanted Bhai fails to meet all expectations and at best, is an average fate.

The story of the movie: The Mumbai Police is under the scanner due to increasing cases of drug abuses among the youth. The druglord is Rana (Randeep Hooda). He’s so ruthless that he even eliminates police officers who are on his trial. With no other option, IGPatil (Govvind Namdvev) suggests to the DIG (Darshan Jariwala) of the police that Radhe (Salman Khan) should be given the duty of catching hold of Rana. Radhe has done several encounters of criminals and is currently under suspension. The DIG revokes his suspension and Radhe joins duty. Meanwhile, Mumbai is run by two warring gangs – one of Dilawar (Sudhanshu Pandey) and that of Dagdu (Pravin Tarde). Radhe compels both of them to befriend each other. He then tells them to use their network to find out Rana’s whereabouts. Later, Dilawar learns that his brother Mansoor (Arjun Kanungo) has joined hands with Rana. Mansoor treacherously gets Dilawar killed. Rana then takes over Dagdu’s area as well. The whole of Mumbai is now under Rana and his men. They start selling drugs across the city. At a pub, his men get into a brawl with the security staff and kill them. Rana’s image gets captured in the CCTV cameras of this pub and this makes it easier for the cops to search for him. Finally, Radhe spots Rana some days later in another bar. Here, both get into a brutal fight. Radhe is injured grievously while Rana escapes.

Radhe – Your Most Wanted Bhai is less than two hours long and moves at a quick pace. The horrors of the drug abuse are depicted in a fast and effective manner in the beginning. Salman Khan’s entry is novel this time. It’s praiseworthy that the makers thought out of the box for this important sequence. A few scenes of Diya (Disha Patani) are fun but the chemistry between the two is missing. The sequence where Radhe forces Dilawar and Dagdu to become friends is hilarious. The intermission point is significant but in the second half, the film doesn’t hold the attention. It doesn’t get boring but one could see that the writers have run out of ideas and are simply dragging the narrative. The climax is arresting but we have seen far better and more exciting action-packed endings in Salman’s films in the past.

Salman Khan is in his element completely. The actor is in his comfort zone and hence, is quite effortless in playing the part. Not just in action, he is in good form even in light-hearted and comic scenes. Randeep Hooda is superb as the menacing villain. His looks are spot on and he is convincing as a feared criminal. Disha Patani looks stunning but as expected, she doesn’t have much to do. Jackie Shroff (ACP Avinash Abhyankar) goes a bit overboard. He’s funny initially but after a point, his track doesn’t really work. Pravin Tarde is apt for the part while Sudhanshu Pandey does well in a guest appearance. Megha Akash (Inspector Nikki) has a superb screen presence. Mitansh Lulla (Azaan) is lovely. Sangay Tsheltrim (Lota; member of Rana’s gang) and Gautam Gulati (Girgit) ham a lot. Siddharth Jadhav (Ranjeet Mawani) is loud but it works for his character. His is the only comic track that works to some extent. Arjun Kanungo is average. Govvind Namdvev, Darshan Jariwala and Micky Makhija (Mumbai commissioner) are hardly there. Ihana Dhillon (Mansoor’s wife) is wasted. Same goes for Shawar Ali Khan (Vipul) and Vishwajeet Pradhan (ACP Arjun); in fact, their track made absolutely no sense. Jacqueline Fernandez looks sizzling in ‘Dil De Diya’.

Music works in the film but won’t have a long shelf life. The title track (by Sajid-Wajid) is foot-tapping and is played before the end credits. ‘Seeti Maar’ (by Devi Sri Prasad) is the best song of the lot. ‘Zoom Zoom’ (by Sajid-Wajid) and ‘Dil De Diya’ (by Himesh Reshammiya) are passable. Sanchit Balhara and Ankit Balhara‘s background score is quite better and the theme of the film is sure to linger in one’s mind.

Ayananka Bose‘s cinematography is grand. Myeonghaeng Heo and Anbariv‘s action is a bit too gory and bloody for family viewing. The violence ideally should have been toned down considering that it’s a festival release and aimed for the whole family. Durgaprasad Mhaptare‘s production design is very rich. Ashley Rebello and Alvira Khan Agnihotri‘s costumes (for Salman Khan) are stylish while Aastha Sharma‘s costumes (for Disha Patani) are appealing. Red Chillies VFX‘s VFX is decent but NY VFXWaala‘s VFX for the climax could have been better. Ritesh Soni‘s editing is razor sharp.

Radhe – Your Most Wanted Bhai is based on the Korean film The Outlaws [directed by Kang Yun-sung]. The story is very ordinary and is basically a battle between good vs evil. Vijay Maurya and Ac Mugil‘s screenplay has few striking moments. But these are mainly in the first half. The second half is dragging and the writers should have peppered this hour with some twists and turns. Vijay Maurya‘s dialogues are funny and witty but only at places.

Prabhudheva‘s direction is average. There’s no doubt that he has handled the whole film in a very massy way. Several scenes are such that they would have created frenzy in cinemas like the opening title, Radhe’s entry, the interval sequence, Radhe rescuing Inspector Nikki, etc. However, when the script is weak, the execution can help to an extent. Also, Prabhudheva’s films usually have some fine comic scenes. But in case of Radhe – Your Most Wanted Bhai, the comic track of Avinash Abhyankar falls flat after a point. A few scenes didn’t make sense like Radhe continuing to catch the drug mafia even after getting suspended. And it’s shocking that the makers have repeated the same locales of South Mumbai bylanes. It gave a very low budget feel to this otherwise expensive film.

On the whole, Radhe – Your Most Wanted Bhai has some massy moments which would have made for a great watch in cinemas. However, the unexciting and ordinary script and dragging second half fails to create the desired impact.