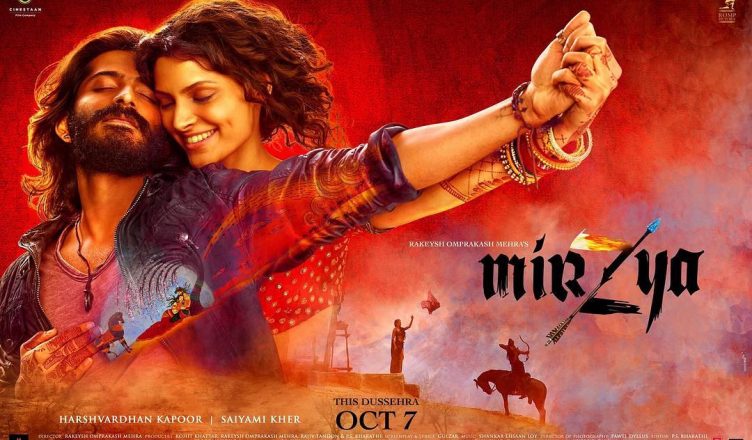 When one has a novel plot at hand with commercial elements, the task usually becomes easier. A film can somehow manage to impress, even though not whole-heartedly, especially if the direction is not upto the mark, provided the plot is exciting. Mirzya, inspired from the legend of Mirza and Sahibaan, is hardly exciting in today’s times especially when films dealing with a similar idea has come up and have been loved immensely. Still, it could have worked big time. But the lackluster script and execution ruins it all! What’s even more heartbreaking is that the script is by Gulzar and yet, it fails big time!

The story of the movie: There are 2 tracks running parallel in the film. One is of Munish (Harshvardhan Kapoor) and Suchitra (Saiyami Kher), childhood friends who get separated due to a very shocking incident. They meet when they grow up but this time, they can’t fall in love and get married, because Munish works at a horse stable and it’s owned by Karan (Anuj Choudhry), who is set to the tie the knot with Suchitra. The other track is of Mirza-Sahiban. Mirza is a pro with bows and arrows and he elopes with Sahibaan just before her marriage. However, Sahibaan’s brothers are not to let this happen and they began chasing the lovers.

The beginning portions make it clear that Mirzya is unconventional and not a usual entertainer. Even if one tries to see the film with that mindset, it still doesn’t impress, especially in the second half. The first half does keep one engaged. The childhood portions of Munish and Suchitra are damn good. The tragedy that takes place is well executed. Munish and Suchitra meeting when they grow up is not boring but is not extraordinary either. The Mirza-Sahibaan track is merely 15-20 minutes long and though it’s visually stunning, it doesn’t really make a mark. One of the reasons for that (for both tracks actually) is that the soul is missing. One doesn’t really empathize much as the connect is just not there. Also, we have seen much better tragedies like Sairat, Ishaqzaade, Bajirao Mastani etc in recent times. Even Mehra’s very own Rang De Basanti is a tragedy in a way but Mirzya is not even half as good as the former. Mehra tries to justify the entire angle of why Sahibaan broke Mirza’s arrows but he’s not successful. In fact, this bit is the most unconvincing part of the film due to which one doesn’t really feel much for the lovers. Secondly, the two tracks should have run parallel. Remember in Rang De Basanti climax how Aamir feels helpless as DJ when the cops are right outside the room and also at the same time as Chandrashekhar Azad is gheraoed by cops. Something similar doesn’t happen with Mirzya. The Mirza-Sahibaan scene comes first followed by Munish-Suchitra’s sequence, in the finale. If it was parallel, it could have been better.

The performances of both the lead actors are quite impressive. Harshvardhan Kapoor looks quite dashing and speaks wonderfully with his eyes. His dialogue delivery is quite nice too. He understands the character very well and the way he adjusts his body language accordingly in front of Anuj, the way a naukar would do in front of the rajkumar, is superb! Saiyami Kher has expressive eyes and performance wise, she is first rate. The scene where she falls off the bike and laughs is quite natural. Both look damn good as Mirza-Sahibaan. Anuj Choudhry is good and his role doesn’t give him the scope to do anything extraordinary. Art Malik (Suchitra’s father) is okay. He’s good overall but hams a bit in a crucial scene in the second half. Om Puri is hardly there but does fine as the sutradhaar. Anjali Patil (Zeenat) leaves a huge mark in a supporting role. K K Raina (Karan’s father) hardly gets a chance but Masood Akhtar (servant) does fine. Master Iteshyam and baby Anuja deliver good performances as the young Munish and Suchitra respectively.

Shankar-Ehsaan-Loy’s music is just okay. The title song is the only song that’s memorable. And even this song is overused and it gets on one’s nerves at places as Daler Mehndi’s voice is too loud. Tubby Parik’s background score is better in fact. Pawel Dyllus’s cinematography is stunning. Some of the takes go on for a long time and it’s brilliantly done. P S Bharathi’s editing is not great – the film could have been crisper. Acropolis Design’s production design is rich and appealing. Same goes for the costumes (Leepakshi Ellawadi, Samidha Wangnoo, Niharika Bhasin) especially the ones worn by Saiyami. Allan Amin’s action is entertaining and real. Danny Baldwin-Manohar Verma’s horse action is great. Dialogues are pretty ordinary. Gulzar’s screenplay is not upto the mark. It should have been tight, engaging and to the point. This is really required since the plot is nothing new. Rakeysh Omprakash Mehra’s direction is disappointing. He’s just not in form and he can’t do much. After all, the plot and script itself is not that great. But even his direction is not that great. He seemed in form in Rang De Basanti and Bhaag Milkha Bhaag; in fact he was better in Delhi-6 as well. Mirzya is hence Mehra’s weakest film!

On the whole, Mirzya is technically brilliant but in terms of script and direction, it is a big disappointment. The film moves very slowly and the story is pretty ordinary – we have seen better tragedies. Harshvardhan Kapoor and Saiyami Kher deliver great performances and they are the only ones who are going to benefit from this film. As for the producers, Mirzya will prove to a loss-making venture!