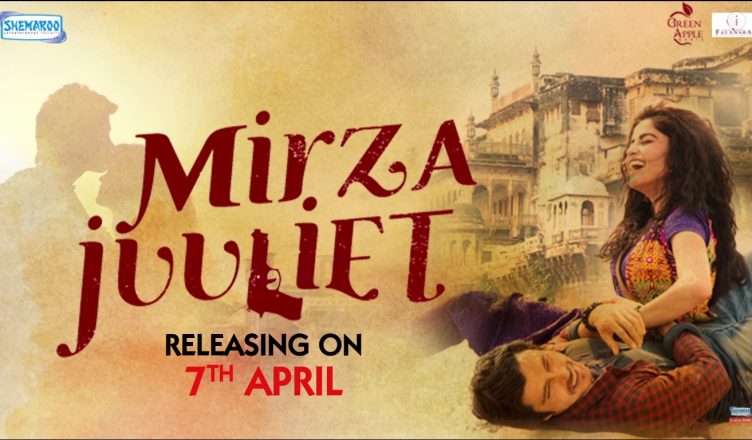 A high-class person falling for a person from a lower class or another religion altogether always makes for a great story. But when the idea is done to death over a short span of time, it might not make the same impact. Mirza Juuliet comes too late in the day and is an average fare, despite the fact that it has its share of plusses

The story of the movie: Julie (Pia Bajpai) comes from an influential family in Mirzapur and is about to be married to Rajan Pandey (Chandan Roy Sanyal) who belongs to a political family. Everything is going fine and this is when Mirza (Darshan Kumaar) comes into their life. Mirza is Julie’s childhood friend and they both hit it off instantly. When Julie realizes that she loves Mirza and vice versa, things go awry.

Mirza Juuliet begins very well. Julie’s entry is great but Mirza’s entry is even better. The twist in the tale that occurs within 10 minutes of the film takes the film to a high. There’s a lot happening in the first half that keeps viewers beautifully engaged – a high profile murder takes place and the agenda is unknown, a sex maniac can’t wait to jump on the bed with his to-be wife, a band of deadly brothers want to become the masters of a town, a firebrand girl is about to turn into a docile housewife and a mysterious man with a violent past is trying to start a new life but circumstances don’t allow him to do so. And yes, there’s some phone sex happening too! But in the second half, Mirza Juuliet turns into a routine drama. We have already seen the idea of two lovers on the run in movies like Mirzya, Sairat, Ishaqzaade, Goliyon Ki Raasleela Ram-leela etc. Mirza Juuliet, in this regard, offers nothing new. Although the makers have tried to infuse some drama (the raksha bandhan bit is impressive), it still isn’t enough.

Mirza Juuliet boasts of some fine performances. Darshan Kumaar, till now, has only played supporting parts in films like Mary Kom, NH10, Sarbjit etc but here, he gets to be the ‘hero’ and does very well. He has the looks and the attitude to carry the film on his shoulders. In the beginning scenes he seemed a bit off-track but soon gets in character very well. Pia Bajpai is highly talented and looks very convincing as the rebellious yet kind-hearted Julie. Her dialogue delivery, looks, and performance – everything is just right. Here’s hoping Mirza Juuliet helps her to get noticed and bag bigger films. Priyanshu Chatterjee (Dharam Raj), I believe, plays for the first time a rustic, dangerous goon and he comes out with flying colours. Although he has played different kind of roles in recent times, he’s still known as the sweet, romantic guy from Tum Bin. Mirza Juuliet however proves that if given a chance, he can get into a drastically different territory very well. Chandan Roy Sanyal goes a bit overboard and one might squirm during his scenes but that is the character’s demand. Yet another great job by this talented performer! Yogendra Singh (Nakul) is highly entertaining and leaves a tremendous impact in a supporting role. Hemant Koumar (Bheem) and Swanand Kirkire (Rajan’s father) are okay.

Krsna Solo’s music is okay. Muhabbat Ko Misuse is the most memorable track and is well shot too. Hitesh Sonik’s background score is fair. Ajay Pandey’s cinematography is decent and captures the locales well. Ram Shetty’s action is watchable and doesn’t go over the top. Shanti Bushan’s story is nice initially but ordinary after a point. His dialogues are damn good and sharp. His screenplay, again, doesn’t have the novelty value. Rajesh Ram Singh’s direction is good and handles the plot well. His work would have come out better if the written material wasn’t predictable after a point.

On the whole, Mirza Juuliet begins well, has some great characters and the chemistry between the lead actors is crackling. Performances are good, not just by Darshan Kumaar and Pia Bajpai but also by those in supporting roles like Chandan Roy Sanyal, Priyanshu Chatterjee and Yogendra Singh. Sadly, the film in the second half turns into a routine predictable drama and that’s where the film falters. Average fare!