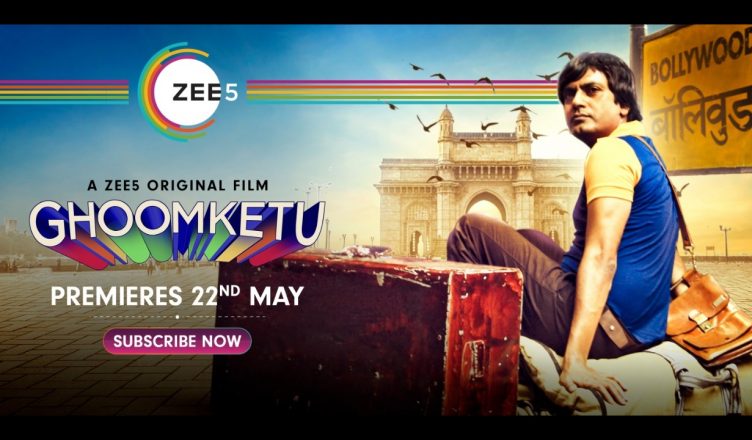 Bollywood has shown countless number of films of struggling actors, and a few on struggling directors as well. The long-delayed film Ghoomketu, which releases today on Zee5, focuses on the life of a struggling writer. Starring Nawazuddin Siddiqui in the lead role, this film boasts of some very interesting characters but the direction and overall writing doesn’t exploit their potential to the fullest.

The story of the movie: Ghoomketu (Nawazuddin Siddiqui), 31, lives in the village of Mahona, Uttar Pradesh with his family – father (Raghubir Yadav), Santo Bua (Ila Arun), step mother Shakuntala Devi (Archana Shukla), uncle Guddan Chacha (Swanand Kirkire) and wife Janki Devi (Ragini Khanna). He wishes to be a writer and goes to the office of the local newspaper Gudgudi for a job. But the chief editor Ramanath Joshi (Brijendra Kala) taunts him for his lack of experience and instead advises him to write for films. After mulling over it, Ghoomketu decides to run away to the city of dreams. He’s close to Santo Bua and he tells only her about his plan. She decides to keep it a secret. Ghoomketu arrives in Mumbai and manages to get a place to stay, that too, in a tailor shop. The shop is owned by a corrupt inspector Badlani (Anurag Kashyap) whose lack of interest in the job and desire to get bribes has landed him in trouble. Back in Mahona, Ghoomketu’s parents complain to the cops. Guddan Chacha knows the local leader well who puts pressure on Mumbai Police to find Ghoomketu anyhow.

We have often seen films where the first 5 or even 10-15 minutes are spent in setting the mood and introducing the viewers to the world through voiceovers. The scenes might seem a bit random here but are shown to establish characters and their traits. Now, imagine if 80% of the film is on those lines? That’s Ghoomketu for you. Most scenes are just randomly stitched together. That wouldn’t have been a problem if these scenes were entertaining or funny. Alas, most scenes don’t impress. There’s a track of Ghoomketu trying his hand in writing comedy, sci-fi, horror, romantic films, and how he fails to do justice. The makers could have gone crazy but they failed. In one scene, Nawazuddin is asked to play the role of an alien as an extra. Again, the scene had immense potential and ends in a horrible way! Ghoomketu’s struggle is never shown properly. As soon as he lands in Mumbai, he manages to meet a big-shot producer (Rajendra Sethi) who patiently reads all his scripts and gives feedback. If only life was so easy! He also easily finds a place to stay and also a helpful neighbour (Deepika Deshpande Amin). Hence, one doesn’t feel connected to the goings-on as it’s very unconvincing. On the positive side, the film starts off very well with the intro bird song being impressive. At a few places, the film does raise genuine laughs.

Talking of performances, Nawazuddin Siddiqui is very sincere and likeable as the simpleton. The film might disappoint but he won’t. Ila Arun is sweet and does a fine job. The sequence where she demonstrates how she’ll express shock and sadness over Ghoomketu’s disappearance is cute. Raghubir Yadav is dependable as always. Swanand Kirkire is fine and it’s sad that his track was wasted and had nothing much to do. Brijendra Kala dominates the introduction sequence and overall, he’s too good. Anurag Kashyap is quite entertaining. He even gets an entry song to himself. Hence, one feels let down when his character gets a raw deal towards the end. Deepika Deshpande Amin is excellent as expected. Rajendra Sethi is passable. Archana Shukla and late Razzak Khan don’t get much scope. The actor who plays property agent and Arnold Schwarzenegger fails to impress as his scene will go bouncer. Yuvraj (Roshan, the tea boy) and Veer Vadan (Tinku Badlani) are fine. Ragini Khanna has a special appearance and her track is very bizarre.

The film has numerous cameos. Amitabh Bachchan has the maximum screen time amongst these actors and is great. Chitrangda Singh is impressive. Ranveer Singh and Sonakshi Sinha fail to do justice due to bad writing. Nikkhil Advani and Anvita Dutt are alright. Lauren Gottlieb is sizzling but her item song comes up randomly, like most things in the film.

Pushpendra Nath Misra‘s direction is fine only in a couple of sequences. In most parts, the film has no proper flow. Also, it pains to see he had such great characters and the setting of cinema. But he just lets it go. For instance, he introduces elements like Santo Bua’s gigantic ‘dhakaar’ (belching) which could have been utilized so well. Similarly, Guddan Chacha’s flashback is shown in a dramatic way. Moreover, when Ghoomketu is given a place to stay in a tailoring shop, one expects that it’ll be well utilized. Also, he had not got a decent bed to sleep and again, one hopes this angle will be introduced while showing his struggle. But the director does nothing about these bits and just lets it go waste!

On the whole, Ghoomketu boasts of promising plot, quirky characters and fine performances. But the writer-director fails to make good use of it. The end result is a film with random scenes put together. A waste of a good opportunity!