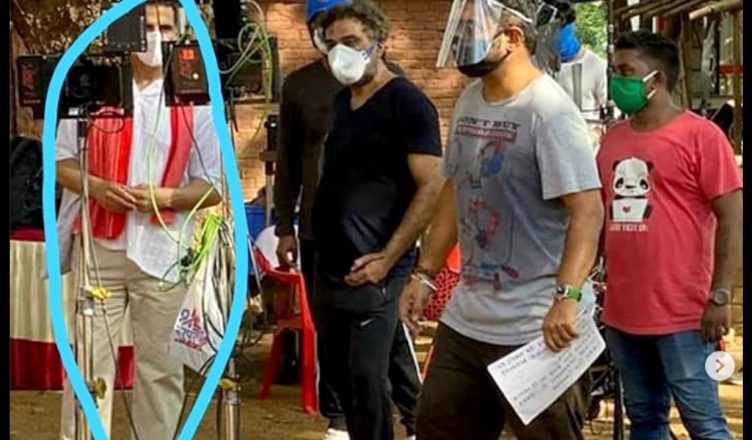 AKSHAY KUMAR SHOOTS for AN AD IN TIMES OF COVID; WILL SHOOTINGS BEGIN FULL-THROTTLE SOON?

On Monday, netizens and film buffs were pleasantly surprised to see superstar Akshay Kumar shooting in times of Coronavirus. As readers are aware, film shoots have been suspended since March 19, even before the nationwide lockdown was enforced. Hence, to see the actor shooting was heartening. Soon, details emerged that the said shoot was for a public service ad and was directed by R Balki. Moreover, it was commissioned by the Government of India and hence, the permission was given them to shoot in the first place. The on the set pictures and brief videos made it clear that all safety measures were in place including use of masks and sanitizers, social distance, minimal presence of crew etc.

This development has given rise to the hope that soon all shoots will be allowed. The industry members are already following this up with Maharashtra chief minister Uddhav Thackeray. On Friday May 22, the CM took a video meeting with the stakeholders for around 45 minutes. In this meeting, he was apprised of the fact that shoots will soon resume in Kerala and Karnataka and that large part of the workforce here is unemployed due to the lockdown. Hence, he was informed of all the standard operation procedures (SOPs) that they plan to follow once operations are rebooted. Uddhav, on his part, made it clear that shootings can’t take place near residential areas. He also announced that he’ll set up a team that will examine the shooting locations. Lastly, he stressed that he too wants shoots to resume soon and that he doesn’t want any producer to head out of Maharashtra to film.

If shootings are allowed, then even post-production work will have to resume. This has already started in the South. And one can expect the same to happen even in Mumbai anytime. Lockdown 4 will end on May 31 and it remains to be seen how soon the permissions are given for the film industry to get back on its feet. Experts hope that by mid-June or by the end of June, shootings will resume. Needless to say, it’ll add cheer to many especially those who are daily workers or at the bottom rung. They want to work and thereby earn and they’ll be more than happy to get back on the sets!