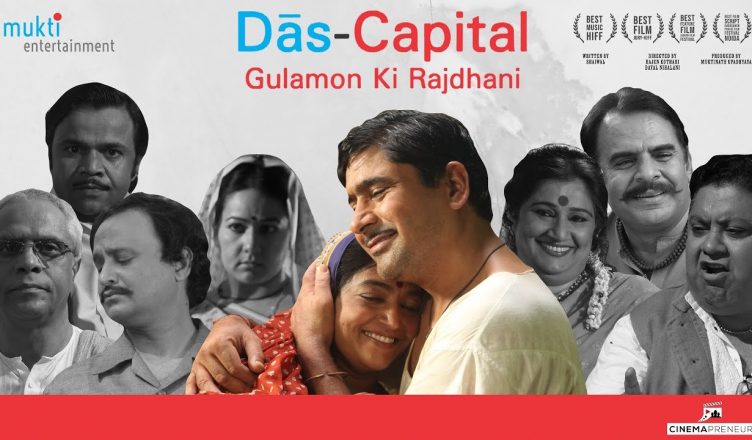 The urban life is considered way more comfortable and easy as compared to the ones being lived by our rural counterparts. Despite the progress and advancement in technology, life in villages continues to be a struggle, even in 2020. Then, imagine how life must have been hard 40 years back? Dās Capital – Gulamon Ki Rajdhani, which releases tomorrow on Cinemapreneur, focuses on this aspect. It is co-directed by late Rajen Kothari, who has been a cinematographer in some significant films like Damul, Pestonjee, Hip Hip Hurray, Mrityudand (also co-wrote it’s screenplay), Godmother, Dil Kya Kare, Bose: The Forgotten Hero, Zubeidaa, Welcome To Sajjanpur, Well Done Abba etc. The other director of this film is Dayal Nihalani who has helmed films like Gambler, Ek Tha Raja, Insaaf – The Final Justice etc. in the past. Despite blemishes, Dās Capital – Gulamon Ki Rajdhani becomes a watchable fare as it touches on aspects not touched by other films in this zone.

The story of the movie: Purshottam Ram (Yashpal Sharma) is a ‘nazir’ or a cashier who works in the Block Development Office in Bihar. He gets into an arranged marriage with Suchi (Pratibha Sharma) and soon, he gets shifted to Rangpur. Here, he reports to Liddhar Ram (Jameel Khan), an extremely corrupt official. Despite his meagre income, Liddhar Ram has turned wealthy by accepting bribes and has a flat in Patna and even runs a transport business. Purshottam Ram is fed up with his corrupt ways and also because of his basic salary that compels him to have a hand-to-mouth existence. His wife’s illness and the maintenance of his two sons further worsen his financial condition. If that’s not all, one day he gets a paralytic attack and has to be hospitalized. Suchi faces roadblocks to withdraw his PF. A portion of it goes as bribes to the officials! What happens next forms the rest of the film.

Dās Capital – Gulamon Ki Rajdhani is a 100 minute long film and keeps one engaged from start to finish. It looks very dated as it’s a nearly ten-year-old film. But the content makes up for it. The first half has some interesting moments, particularly the code words used by the government officials while discussing or asking for bribes. However, at the same time, the narrative is incoherent and scattered. Too many characters get introduced. Things get gripping as Purshottam suffers from paralysis and later when Suchi falls extremely sick. The hospital scenes are sure to form a lump in your throat.

Speaking of performances, Yashpal Sharma is superb in his lead role. This is the only or maybe a rare film where he’s playing the protagonist and he shoulders the responsibility beautifully. This is surely one of his most accomplished performances! Pratibha Sharma suits the part to the T and leaves a huge mark. Jameel Khan is entertaining. His facial expressions and persona make him ideal for the role. Ravi Jhankal (Shivratan) has a fine screen presence. However, the culmination of his track could have been gradual. K K Raina (Prabhusaran Mukhiya) is first-rate. Bacchan Pachera (Surdas) and Krishna Raaz (Sakla Mai) are lovely. Ayesha Raza Mishra (Pansokha) is too good in the small role. Amit Jairath (Rambaran) registers an impact, especially in his introduction scene. Rajendra Sethi (Bada babu; accountant) makes his presence felt. Vijay Kumar (Ramratan) is great, particularly in the hospital scene. Neeraj Sood (Dallu Singh) is dependable. Pooja Pradaan (Liddhar Ram’s wife) is entertaining. Rajshri Deshpande (Nurse) is splendid in a cameo. This was her first film. Pratik Kothari (Bhuletna) essays the challenging part with ease. Mohit Upadhyaya (Dhaneshar) is a bit over the top. Anupam Shyam (Siyasaran Mantri) is fair and seems appropriate for the role. Seema Bhargava Pahwa (Rashida) is, as always, wonderful. Satish Sharma (DDC Chandramohan) is memorable, despite being there for just one scene. Manoj Pahwa (Lathan Singh Mantri) is great but his character has nothing much to do. The same goes for Lalit Tiwari (Krishimantri), Late Sitaram Panchal (Supervisor), Mukesh Bhatt (Sidhnath Chaudhary) and Late Asif Basra (Dhanurdhari Pandey). Finally, Rajpal Yadav (DM) is miscast. His screen time is less than 30 seconds and is just wasted.

Amod Bhatt‘s music is of folk variety and is in sync with the film’s period and theme. Mangesh Dhakde‘s background score is old school but works. Chandan Goswami‘s cinematography is neat and captures the rustic mood very well. It’s interesting to know that the film has been shot in Mumbai’s outskirts and yet looks very convincing. Salim Arif‘s costumes and Somenath Pakre‘s art direction are realistic and straight out of the 80s era. Prashant Naik‘s editing is a bit haphazard at a few places.

Dās Capital – Gulamon Ki Rajdhani is based on Shaiwal‘s short story, Arth Tantra. Shaiwal has also written the film’s story. It touches upon the difficult life in villages, that too of government officers who ideally should be living better off than the rest. But the writer proves that’s not the case. Also, it focuses on the misappropriation of public money at the grassroot level, something that is seldom captured on celluloid. Shaiwal‘s screenplay is decent for most parts but the subplots leave a lot to be desired. There are too many characters in the film and their tracks don’t create the desired impact. Shaiwal‘s dialogues are sharp. The use of the rustic language of Jharkhand and Bihar adds to the authenticity.

Rajen Kothari and Dayal Nihalani‘s direction is fine. They have tried their best to do justice to the plot and also to the era in which the film is set. A few scenes are exceptionally handled, especially Suchi’s hospitalization and the working of the BDO office. The scene where Liddhar Ram’s wife is falsely presented as a prostitute in the court, to save the former, is hilarious and easily one of the most unique scenes you’ll see in your life! On the flipside, the story barely moves in the first half. Audiences might find it difficult when the flashback starts. Perhaps, the makers should have added ‘5 years ago’ text to make it simpler. Moreover, a few developments happen very suddenly. This is especially in the track of the nurse and the miniter’s corrupt nephew. Also, the biggest problem is that there are far too many actors who have done special appearances in the film, possibly as a goodwill gesture. However, most of them don’t have much to do and are added simply for the heck of it. When one sees reputed, talented actors in the narrative, one hopes they’ll have something substantial to do in the film, even if their appearance is not more than a minute or two. However, most of them are terribly wasted. Remove them and the film would still make sense.

On the whole, Dās Capital – Gulamon Ki Rajdhani is a fine and a genuine effort which deserves a watch once. It has an ensemble cast and comprises talented actors like Yashpal Sharma in a lead role with Jameel Khan, Ayesha Raza Mishra, Rajshri Deshpande, Seema Bhargava Pahwa etc having some important parts in the movie. More than that, it’s praiseworthy that Pratik Kothari has pulled all stops and managed to release his late father, acclaimed cinematographer Rajen Kothari’s labour of love. Do log on to Cinemapreneur and give this well-made and well-intentioned film the due that it rightfully deserves.