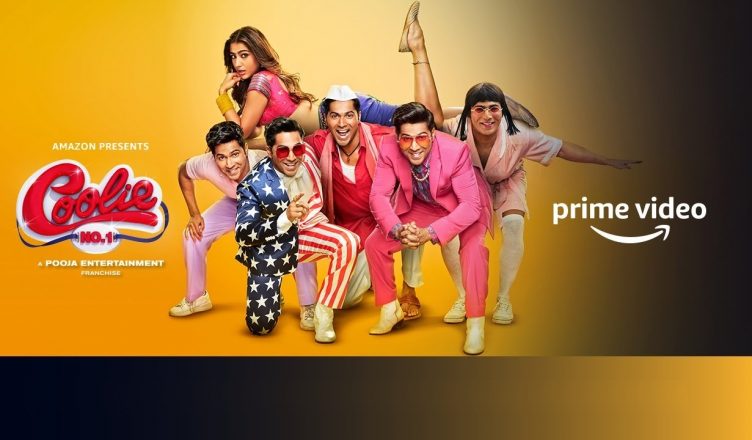 One of the greatest entertainers of Bollywood, David Dhawan, is back. 3years back, he struck gold with Varun Dhawan-starrer Judwaa 2, the remake of his much loved 1997 film. Now the father-son duo has reunited for Coolie No 1. As we all know, the original 1995 film of the same name was a runaway success and is still fondly remembered for its comic moments and songs. It was also a significant film for David as it was the start of the No 1 franchise which gave him great popularity later on. The remake version, releasing on Amazon Prime, also looks quite fresh and massy from the trailer. And though it doesn’t meet all the expectations, it manages to be a fun watch!

The story of the movie: Pandit Jai Kishen (Jaaved Jaaferi) is a matchmaker who goes to meet the very rich Jeffery Rozario (Paresh Rawal) at his house in Goa with a suitable match for his daughter Sarah (Sara Ali Khan). Rozario however humiliates Jai Kishan and the prospective groom’s family as they belong to the middle-class. Rozario tells Jai Kishen that he wants a billionaire as his son-in-law and then kicks Jai Kishen out of his house. Jai Kishen returns back to his city, Mumbai. At the Mumbai Central railway station, he meets Raju Coolie (Varun Dhawan), a brave porter with the heart of gold. Raju happens to see Sarah’s picture and falls for her instantly. This is when Jai Kishen hits upon an idea to teach Rozario a lesson. He tells Raju that if he wants to marry Sarah, he would have to pretend to be an heir of the Maharaja of Singapore and thus assume the identity of Kunwar Pratap Singh. Raju agrees. Raju’s friend Deepak (Sahil Vaid), a mechanic, also joins in the plan and pretends to be Kunwar Pratap’s driver. Meanwhile, Jai Kishen masquerades as Jackson, Kunwar Pratap’s PA. The trio reach Goa and stay in Rozario’s hotel. Kunwar Pratap claims to be building a grand port in Goa. He also meets Sarah and both fall for each other. Deepak, meanwhile, gets attracted to Sarah’s sister Anju (Shikha Talsania). Rozario is thrilled that such a wealthy person wants to marry his daughter. Kunwar Pratap meanwhile lies to Rozario that the latter won’t be able to meet his father as he’s dead against this marriage. As a result, Rozario agrees for Kunwar Pratap and Sarah’s marriage without meeting his father. After the marriage, Sarah pressurizes Kunwar Pratap to take him to her ‘sasural’, which she believes is a palatial bungalow in Juhu. Kunwar Pratap aka Raju doesn’t know what to do now.

Coolie No 1 has a terrific beginning. The remake attempts to show Raju’s beginnings and it’s done brilliantly through animation. The tribute to Amitabh Bachchan and Manmohan Desai cinema here is well woven. Varun’s entry is clapworthy as expected. The actual fun begins once ‘Kunwar Pratap’, ‘Jackson’ and Deepak go to Goa to fool the Rozario’s. The film gives no reason to complaint here. The intermission point is hilarious. Post-interval, the film begins to lose grip at many places. A few scenes here and there do raise interest but soon enough, the film drops again. The climax revives interest. The ending is a bit abrupt.

Coolie No 1 is the remake of the 1995 film which in turns was a remake of the Tamil comedy Chinna Mappilai [1993]. Amma Creations‘s story (original story writer; real name is T Siva; as per Wikipedia, T Siva wrote the story with P Kalaimani but he was uncredited) is hilarious and can make for a laugh-a-minute riot. Rumi Jaffery‘s screenplay (who also wrote the original screenplay) works, but only in places. A big problem that the writers face here is that the story gets a bit dated. They try their best to make it relevant but succeed only to an extent. Farhad Samji‘s dialogues (original dialogues were written by Kader Khan) are hilarious in several places. In a few scenes, especially in the ones featuring Johny Lever, it fails miserably.

David Dhawan‘s direction is neat and he tries his best to make the goings-on uncomplicated and simple. He gets the first part right, despite the fact that the original version also had ditto the same version. In the post-interval sequence, however, he allows the film to go haywire. He should have made the goings-on interesting and funnier but doesn’t fully succeed. Also, in some scenes, he uses jokes and gags from popular, old comic films. The scene where Raju tries to hide from Rozaria when he’s in Sarah’s room is a copy of a similar scene in Haseena Maan Jayegi. The scene of the bell boy (Rajat Rawail) seems to be lifted from Dinesh Hingoo’s track in No Entry.

Speaking of performances, Varun Dhawan is in top form. His comic timing does fall flat at a few places but he puts in his best. And most importantly, he proves yet again that he can handle such a commercial film convincingly. Not many actors today can boast of this feat. Sara Ali Khan looks gorgeous and does much better than her last fiasco, Love Aaj Kal. Paresh Rawal is superb in his role and adds to the fun and humour. Jaaved Jaaferi is dependable as always. Rajpal Yadav (Mama) is strictly okay. Also, he had played a similar part in Judwaa 2. Sahil Vaid is quite nice and suits the part. Shikha Talsania is fair in her supporting part. Vikas Verma does well in the role of a commercial villain. Anil Dhawan (Mahendra Pratap Singh) gets limited scope. Same goes for Manoj Joshi (manager) and Bharti Achrekar (Dadi). Johny Lever (Police Inspector Jagjit Godbole) is bad and his lines are the worst in the film. Rajat Rawail is disappointing. Shashi Kiran (Coolie Chacha), Hemant Pandey (Tambi) and Farhad Samji (Plumber) are okay in the cameo appearances.

Music is one of the strengths of the film. The title track, played in the opening credits, is lovely and well written. ‘Mirchi Lagi Toh’ comes next and watching it in cinemas would have been a riot. ‘Husn Hai Suhana’ comes next and revives interest at a time when the film goes on an all-time low. ‘Mummy Kassam’ and ‘Teri Bhabhi’ are fine. Salim-Sulaiman‘s background score is dramatic. Ganesh Acharya‘s choreography is massy.

Ravi K Chandran‘s cinematographer is appropriate. Rajat Poddar‘s production design is quite theatrical. ‘ANL’ Arasu‘s action is over the top but works well in a family entertainer like this one. Manish Malhotra’s costumes for Sara Ali Khan are very appealing and trendsetting. Shiraz Siddique’s for Varun Dhawan are stylish. Redefine‘s VFX is horrible. Two crucial scenes of characters about to hit by a moving train have very poor effects.  Ritesh Soni‘s editing is a bit jerky and sudden at places.

On the whole, Coolie No 1 is a timepass, masala film which holds appeal for the masses, family audiences and also for the under-20 crowd which might have not seen the original version. Releasing it on Amazon Prime is a bad idea as it was meant for the big screen. Nevertheless, it’ll surely get it’s due on television.