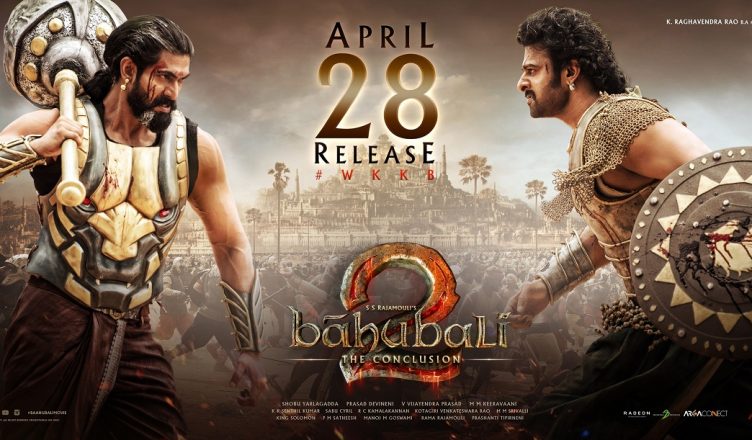 We often see films like The Jungle Book, The Avengers, Captain America etc and ask ‘When will India make such grand films?’. Baahubali 2: The Conclusion is the answer to this million dollar question. The first part showed only glimpses of it – the sequel goes ten notches higher in terms of grandeur, visual effects and action. And there’s no compromise on storytelling either!

The story of the movie: After the war with the Kalakeyas, Baahubali (Prabhas) is announced as the king of Mahishmati. In no time, he falls in love with Devasena (Anushka Shetty), a princess from the neighbouring kingdom. But things get very tough for him thanks to his evil half-brother Bhallala Deva (Rana Daggubati) and his father Bijjaladeva (Nassar).

Baahubali 2: The Conclusion begins with some brilliant opening credits. The story begins from where part 1 ended. The entry of Devasena is heroic as well as sensual. The entire track of Devasena and her closed ones is quite light-hearted and funny. However, the tension escalates soon enough that makes for a gripping watch. The entire 20 minutes before the intermission takes the film to great heights with mere confrontational sequences. Post-interval, the madness continues although at this point, a few scenes are not very convincing. But thankfully there’s a lot happening in the film and soon the film gets firmly back on track. Director S S Rajamouli however reserves the best for the finale. With so many action scenes in the film, one might wonder if the climax will be worth it. But Rajamouli and his team surprise and how! The climax action is out of this world and the film ends on a terrific note!

Prabhas is the soul of this film. Just like part 1, even here he wins hearts with his bravery and his large-heartedness. Again, this time one gets to see his romantic side but in the sequel, he’s romancing Devasena and it makes for a nice watch. Prabhas has made the character of Baahubali immortal and vice versa. Huge round of applause for this feat! Rana Daggubati too plays his part in an excellent manner. Watch out for scenes where his eyes are only doing the talking – it’s too good! Anushka Shetty was seen as a defeated-but-still-hopeful mother. In Baahubali 2: The Conclusion, she gets to play the young lover of a brave warrior and is outstanding to say the least! What beauty, what grace and what kickass attitude! She has a very important part in the film from start to finish and will be loved! Ramya Krishnan (Sivagami) delivers a first-rate performance and manages to maintain a strong position. Some of the actions taken by her character are debatable but she plays her part very well. Sathyaraj (Katappa) is in a way the ‘second hero’ of this film. He’s highly adorable and praiseworthy. What’s more, this time he even indulges in some buffoonery humour! Nassar plays the evil part convincingly while Subbaraju (Kumara Varma) is a great surprise. Tamannaah Bhatia (Avanthika) shockingly has very little to do in this film.

M M Kreem’s music is superb, rooted and well woven in the film. The title track is damn good but the two songs that leave the maximum impact are Soja Zara and Veeron Ke Veer Aa. Both these songs are well composed, imagined and shot – see it to believe it! Jay-Jaykara is quite touching. Shivam is played during opening credits which adds to the impact. The background scene is exhilarating. In fact, it goes a long way in creating the desired impact! K K Senthil Kumar’s cinematography is flawless and gives the film a nice epic touch. Same goes for Sabu Cyril’s sprawling sets. In fact, the makers had to ensure that the film is grander than the predecessor and in that regard, it comes out with flying colours. Rama Rajamouli and Prashanti Tipirneni deserve loads of praise for the wonderful, royal costumes. King Solomon, Lee Whittakar, Kaecha Kampakdee’s action is one of the best parts of this film. It is highly imaginative and appealing. At the same time, it’s slightly gory but nothing that would make the family audiences uncomfortable. VFX deserves the highest praise. In the first part, the VFX in few shots was not upto the mark. But in Baahubali 2: The Conclusion, there’s no reason for complain even for a second! Manoj Muntashir’s Hindi dialogues are simple and sharp. As for V Vijayendra Prasad’s story and S S Rajamouli’s screenplay and direction, words will fall short! The father-son duo has managed to create something that seemed impossible in India. But they did it and that too at lesser budget than the Hollywood couterparts. Story is highly engaging and the misunderstandings and all are neatly woven. Screenplay does total justice and so does the direction. How on earth did they manage to imagine this world, the unusual and heroic war tactics and the epic finale! Hats off, simply put!

On the whole, Baahubali 2: The Conclusion is an epic film that will surely leave viewers amazed and in awe! It doesn’t bore even for a second as there’s so much happening in the film. Each principle character is well utilized and every action sequence is worth praising. The best is however reserved for the finale. Prabhas is dream-like, Rana Daggubati and Nassar are damn good in their evil roles, Sathyaraj and Ramya Krishnan are very impressive while Anushka Shetty rocks the show. Songs, VFX, action, cinematography, action – everything is just right. Watch this film in as big a screen as possible as it will be a crime to see it on your desktops, laptops or smartphones. And finally, a big thank you to S S Rajamouli and his team for making it clear that India is very much capable of delivering a film that matches Hollywood blockbusters in terms of grandeur and scale!

One thought on “Movie Review: BAAHUBALI 2: THE CONCLUSION by FENIL SETA”