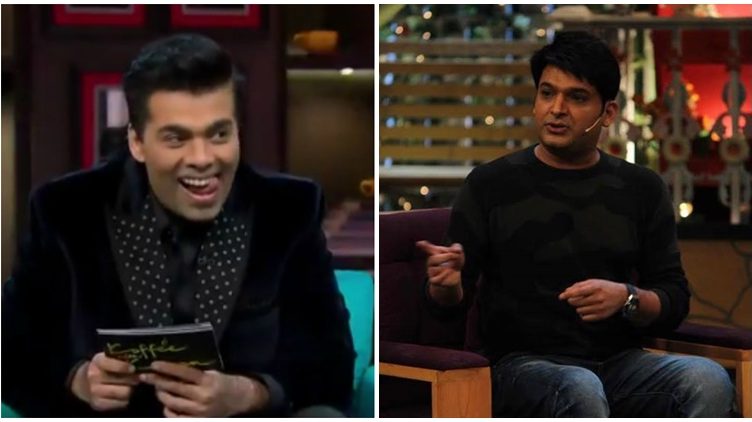 It’s been 13 weeks since Koffee With Karan Season 5 commenced and as expected, it has turned out to be highly entertaining. Each episode was as good, spicy and headline-worthy as the other. The episodes of all celebrities whose pictures had come out on social media posing on Koffee sets have already been out.

All except one. And that celebrity is TV’s funnyman Kapil Sharma. The performer, who started out with TV Shows, runs the very popular The Kapil Sharma Show and has already acted in a successful film, Kis Kisko Pyaar Karoon, has also shot for an episode for Karan Johar’s TV show. This is what Kapil had tweeted after his stint on Koffee With Karan:

Thank u @karanjohar sir for inviting me on ur lovely show #koffeewithkaran n for so many beautiful gifts .. pic.twitter.com/PRtIzBEhJD

This tweet indicates that Kapil has won the Koffee hamper. The tweet was posted on November 22 that is almost 3 months before. And till now, the episode hasn’t been aired. The next week’s episode will have Tiger and papa Jackie Shroff together. Will Kapil’s episode be shown next, that is on February 5, 2017? And why such a long wait to show this episode? Kapil is a guy with a great sense of humour and must have left everyone in splits. His rapid fire answers too must have been quite witty which must be the reason why he won the round.

All those thinking that a fight between Kapil and Karan must be the reason should abandon these ideas immediately. Both hosted the 62nd JIO Filmfare Awards recently. If a feud or cold war was the reason, both wouldn’t have shared space. The reason is something else. Perhaps the Koffee makers thought they’ll show the prominent, successful film actors first and then air Kapil’s episode. Still this reason doesn’t sound convincing as Kapil is arguably more successful than some of the actors who appeared on the show!

Whatever be the reason, here’s hoping this much-awaited episode is aired soon!