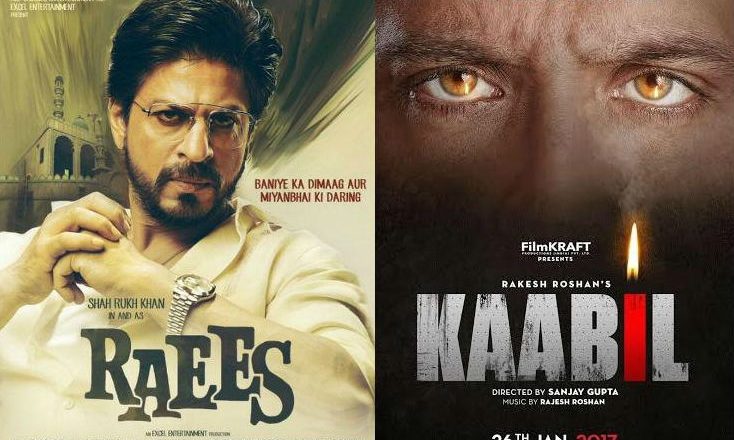 One of the biggest and most-talked about clashes in recent times will happen tomorrow when Raees and Kaabil will hit screens. Both films have generated excitement and it remains to be seen which film emerges at the top! My analysis on these films:

RAEES: It stars Shah Rukh Khan in a leading role and is directed by Rahul Dholakia. Farhan Akhtar and Ritesh Sidhwani are the producers. The film’s shoot commenced in 2015 and was to release in 2016. But due to SRK’s injury and also reportedly to make the film more masala-daar which led to reshooting, the release date of the film was postponed. It was to then clash with Sultan on Eid last year initially. The trailers of the film are highly exciting and most importantly, it looks like a film that has pan India appeal. Songs have worked as well, especially Laila featuring the sizzling Sunny Leone. Pakistani actress Mahira Khan features opp SRK and her chemistry with the superstar has grabbed attention. On the flipside, the film might turn out to be a clichéd gangster drama. Also, there’s a fear that the clash might affect the collections. Even if it does 150 crore business, it will still be less especially since SRK’s contemporaries – Salman and Aamir Khan – are doing blockbuster business and already in 300-crore-club.

KAABIL: It stars Hrithik Roshan and this marks the first time that the Roshans are working with director Sanjay Gupta. It features Hrithik and Yami Gautam as two blind people in love. The film turns into a revenge saga when something unexpected happens in their lives. The trailer is intriguing and it will be interesting to see how a blind man takes revenge from very powerful villainous goons. Also, the film is not just dark and gory – it has some romantic moments too. The excitement for the film however is only till an extent. Also, if it turns out to be too dark like previous Sanjay Gupta films, it can prove to be a big problem in getting universal acceptance. Also, again, the clash can affect its numbers.

Many feel that the clash can affect both films. But that’s not true, especially if both films are well-made and get thumbs up from audiences. I still stand by what I said last week and that is – both films can collectively do a business of Rs 400 crore! Let’s hope that happens because our industry is in need of success stories!

WOULD YOU LIKE TO SEE RAEES OR KAABIL AND WHY? DO LET ME KNOW!