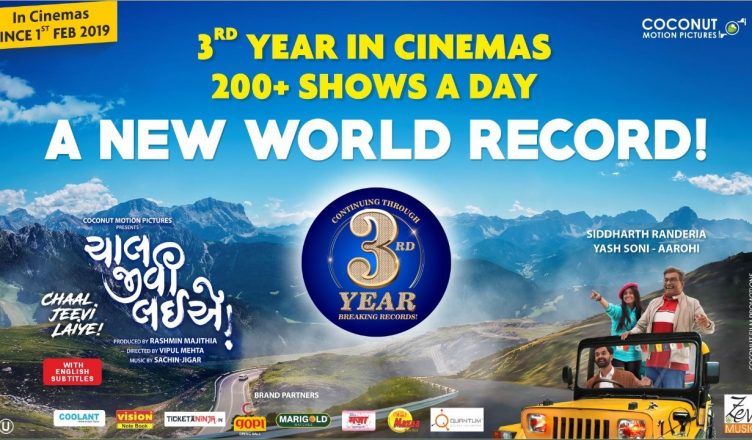 At a time when people are of the belief that cinema business is going to diminish from here on, it’s heartening to see that the Gujarati blockbuster filmChaal Jeevi Laiye has managed to excel in cinemas, and how! Believe it or not, this film has completed 2 years in cinemas! Yes, you read it right. Today, that is, February 1 marks its second anniversary. Needless to say, not just the makers but even the exhibitors screening the film are grinning from ear to ear. In fact, so happy are the multiplexes that for the anniversary week, they decided to increase the shows. Ritesh Laalan, CEO of Coconut Motion Pictures says, “The multiplexes have added the shows on their own. We haven’t told them to do so. The film this week is running in more than 200 shows across the country. Till last week, it had 50 shows, in Gujarat and Mumbai.”

A quick glance at the ticketing website, Book My Show, shows that the shows of Chaal Jeevi Laiye have indeed increased in places like Ahmedabad (currently running with 27 shows in a day), Surat (24 shows), Vadodara (17 shows) and Anand (12 shows). In Mumbai, it has the third highest number of shows, at 23. Interestingly, Chaal Jeevi Laiye has re-released in Pune, Bengaluru and Delhi-NCR with 3 shows each and in Hyderabad with 2 shows. In Kolkata, it will have one show daily. And very surprisingly, the city of Patna, too, has one show daily this week. The prices of most of these shows are priced at less than Rs. 100.

The collections of Chaal Jeevi Laiye till date are expected to be around Rs. 44-45 crore net. In comparison to Bollywood and South films, it might not seem significant but it’s a feat for a Gujarati film to reach till this mark. Also, what sets it apart is that the film has managed to find audiences for two years and yet, it’s not showing any signs of slow down. Ritesh Laalan adds, “In the week of Makar Sankranti, the collections had doubled as compared to the previous week.”

It’s no wonder that the makers are ecstatic about this feat. A success bash was organized yesterday in Ahmedabad and another one a week later, in Mumbai for the cast and crew. Chaal Jeevi Laiye is the story of a workaholic son who takes his terminally ill father on holiday to the Himalayan state of Uttarakhand to fulfil his last wish. On the way, they meet a young woman named Ketki and the trio undertake the most unexpected but satisfying journey of their lives. Starring Siddharth Randeria, a star of Gujarati theatre and cinema, along with Yash Soni and Aarohi Patel, the film has been directed by Vipul Mehta with music by popular composer duo Sachin-Jigar.

Last year, the makers had revealed that they plan to remake this film in Hindi. In fact, they had spoken to Rishi Kapoor and were about to get Ranbir Kapoor on board as well. However, the plans went kaput after the veteran actor passed away, on April 30, 2020. Yet, the remake plan is on and they are currently hunting actors for the lead characters.