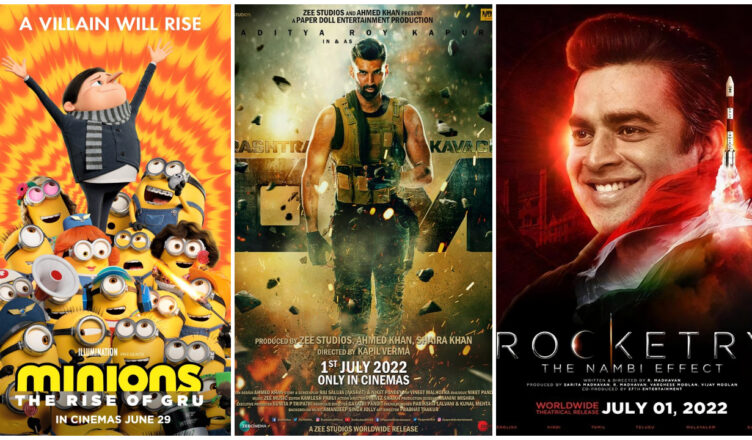 The next two Fridays will see Bollywood taking a backseat as some not-so-exciting films would be up for release. Meanwhile, Hollywood can dominate this week as well as the next. While Thor: Love And Thunder would be released on Thursday, July 7, this week will see the release of Minions: The Rise Of Gru. The film has been ready for a long time and was supposed to be released on June 13, 2020. Due to the Covid pandemic, it got delayed by a year, at first. Finally, it will be out in cinemas on Thursday, June 30, in India.

Minions: The Rise Of Gru is a part of the Despicable Me franchise. However, the story takes off from where Minions ended and it shows how these yellow, mischievous creatures declared Gru as their boss. These characters are extremely popular and have a fan following in audiences of all ages. Though the previous films in this franchise haven’t done record business in India, Minions: The Rise Of Gru can work as there’s a dearth of exciting content in cinemas.

Since it releases on a Thursday, its collections would be poor on day 1 as it’s a family film. The target audience of such films throng cinemas mainly on Saturday and Sunday. Hence, the earnings of Minions: The Rise Of Gru can rise on these two days if the word of mouth is positive. Recently, Top Gun: Maverick also didn’t start well and many assumed that it’ll flop. However, once the film picked up, there was no looking back and it is about to cross the Rs. 40 crore mark! Minions: The Rise Of Gru won’t put up such numbers and even if it does Rs. 10-12 crores business, it’ll be more than enough.

Meanwhile, two Bollywood films would also release this week, on Friday, July 1. Rashtra Kavach OM stars Aditya Roy Kapur in an action packed avatar for the first time. Sanjana Sanghi is paired opposite him in this film, which is produced by Ahmed Khan. The film was earlier titled OM: The Battle Within. Reportedly, the name was changed due to issues concerning the copyright of the title. The excitement for the film is minimal. Moreover, it seems like the audience is not entirely kicked with the idea of seeing Aditya Roy Kapur in such a role. Its opening would be poor, in the range of Rs. 75 lakhs to Rs. 2 crores. In the single screens of B and C centres, it’ll find some takers.

The final release of the week is Rocketry: The Nambi Effect. It features R Madhavan as the lead actor as well as the director. The movie tells a fascinating story of Nambi Narayan, an ISRO genius, who was falsely accused of espionage. Rocketry: The Nambi Effect was screened at the 75th Cannes Film Festival and the response was quite positive. However, since the awareness and hype are low, the makers would have to make do with critical acclaim as commercial success will be hard to come by, especially in the Hindi version. Rocketry: The Nambi Effect is also being released in Tamil, Telugu, Kannada, Malayalam and English.