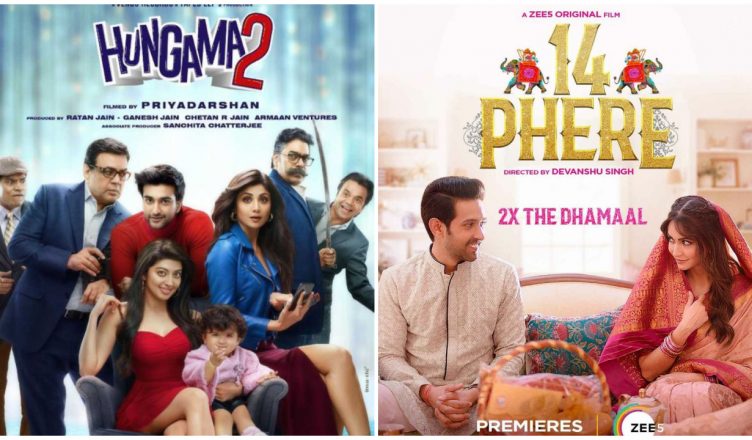 A COMIC CAPER AND ROMCOM TO ENTERTAIN AUDIENCES THIS WEEKEND

While theatres are still shut, two films that were supposed to release on the big screen have now made their way on digital. These two films – Hungama 2 and 14 Phere – are now releasing tomorrow online.

Hungama 2 will be released on Disney+ Hotstar and like the first part, it is directed by Priyadarshan. But the story and characters are not the same as in the 2003original. The sequel stars Meezaan Jafri, Pranitha Subhash, Shilpa Shetty and Paresh Rawal. The trailer has been alright but the film seems like a fun entertainer aimed at families. Also, Hungama is a much-loved film and continues to get good ratings even today. Hence, the sequel will also get viewership, regardless of the reviews.

The film has been in the news thanks to the remix of the song ‘Chura Ke Dil Mera’. The original featured Shilpa Shetty in a sensuous avatar and the same happens in the remix as well. While some criticized the recreation, the discussion around the song kept the film in news.

The other film of this week is 14 Phere. It’ll premiere on Zee5 and stars Vikrant Massey and Kriti Kharbanda. The film looks like a nice romantic comedy and the title is novel. Sadly, the buzz is negligible. Many moviegoers and netizens are not even aware that such a film is being released. The soundtrack has gone unnoticed. The film will need to be really good to get viewership and also sustain the competition from Hungama 2.

Interestingly, 14 Phere is a film that went on floors post lockdown, in November 2020. It was initially scheduled to release on July 9 in cinemas this year.