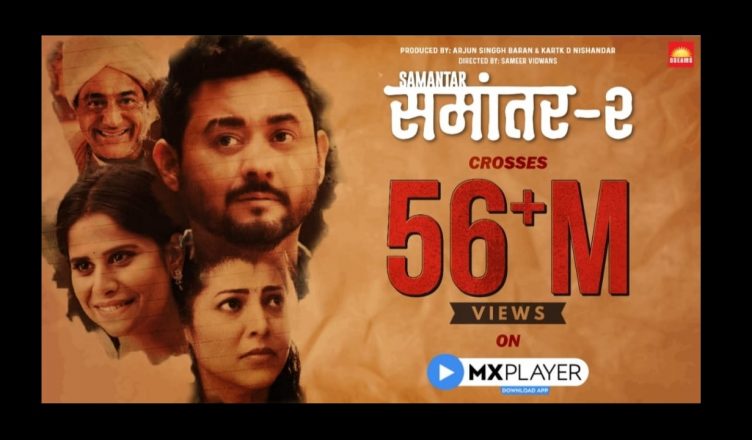 Repeating the response it received for its first season, the second season of Samantar has received more than 56 million views since its launch on MX Player. Post the success of Samantar season 1, the season 2 was released on MX Player on the July 1, 2021. Produced by leading content producing studio GSEAMS (Global Sports Entertainment And Media Solutions Private Limited) headed by Arjun Singgh Baran and Kartk D Nishandar, the web series has become talk of the town. Apart from talented actors like Nitish Bhardwaj, Swwapnil Joshi and Tejaswini Pandit who added quality to the series, the second season also features the talented silver screen sensation Sai Tamhankar.

“We were sure about the success of Samantar 2 as it is a perfect combination of everything. I am overwhelmed with the response the series has received in its second season as well. I am happy that the new experiments I have been doing in my career are working and people are giving it thumbs up. The credit of this success must go to producers Arjun and Kartk along with the director Sameer Vidwans for the efforts they have put in both creatively as well as ensuring the quality of the shoot,” said Swwapnil Joshi who plays the lead character of Kumar Mahajan.

Swwapnil also narrated how the entire team of actors and crew members were stuck in a hotel during the shooting of Samantar 1 due to the flooding. “Kolhapur and Sangli had witnessed downpour and flooding in August 2019 when we were shooting for Samantar 1. The downpour was so massive that the entire team was stuck for 13 days in a row in a hotel in Kolhapur. However, Arjun, Kartik and the team ensured that we were all taken care of very well. Those were some of the most unforgettable days and it still gives us goosebumps whenever the team members remember it during our shooting,” he said.

Speaking to us on Samatar 2, Arjun and Kartk said “Samantar is a fabulous story which we knew would appeal to a very large audience. We are extremely happy with the response that Samantar 2 has got and we intend to produce many more such series based on a variety of subjects and genres”.

The producers further elaborated on their decision over casting Swwapnil Joshi and Nitish Bhardwaj against each other. “Both of them are widely recognised as Krishna across the world for their memorable roles in two different serials. Samantar gives an opportunity to the audience to see both the stalwarts face to face. Similarly, when we chose Sai Tamhankar for the role of Sundara and Meera, we were suggested many names for this character. But we were determined to have her for the role as we firmly believed that only she could justify the character of Sundara,” Arjun and Kartik said.

GSEAMS has given us many memorable Marathi films like Mogara Phulaalaa, Bonus, Fugay, Tula Kalnaar Nahi, Ranangan and Vicky Velingkar. With the release of web series like Naxalbari on Zee5 and Samantar season 1 and 2 on MX player, GSEAMS has once again proved itself as a leading production studio which creates quality content.