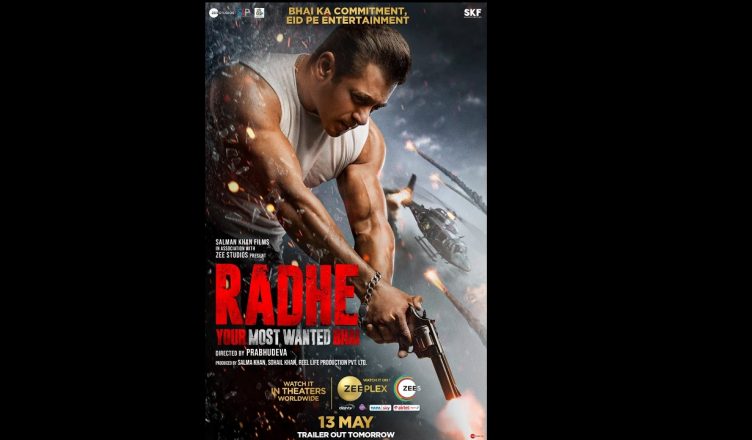 Almost all Hindi films scheduled for release in April have been pushed ahead as the second wave of Coronavirus has wreaked havoc. Now all eyes were on the releases in May. There was buzz that the much awaited Salman Khan starrer, Radhe, would also be pushed ahead. After all, it’s a big film and with theatres shut in most parts of the country, it won’t be able to do the desired business.

Shockingly, yesterday, the makers announced that Radhe would release as scheduled on May 13, on Ramzan Eid. However, it’ll have a hybrid release. It means that it’ll release in theatres and simultaneously on ZeePlex as well. ZeePlex is a pay-per-view platform. It’s different from say a Netflix or Amazon Prime where one pays a subscription fee for a month or a year and can then enjoy all the content available on the platform for that period. In the case of ZeePlex, one needs to pay in order to watch a particular film. Also, one needs to see it within a stipulated time, that is within 12 or 24 hours of paying for the film.

Hollywood has adopted this model and is doing well. In fact, Warner Bros has been similarly releasing all its films in cinemas and also on its pay-per-view platform, HBO Max, in North America (USA and Canada). This approach of Warner Bros commenced with the 2020 Christmas release, Wonder Woman 1984. This was a time when most cinemas were shut in the USA and the residents were able to enjoy the Gal Gadot starrer at the same time as the rest of the world thanks to its same-day digital release. Many felt that this would sound the death knell for cinemas. The argument was that if a film is available online, most viewers would not prefer going to the theatres. However, this notion was proved wrong last month with the release of Godzilla vs. Kong. The film got record viewings on HBO Max but at the same time, managed to get record footfalls post pandemic in cinemas as well. As of April 18, Godzilla vs. Kong collected $80.6 million in North America. Its worldwide total is $390.9 million and is all set to soon cross the $400 million mark. Interestingly, it was made at a budget of approximately $165 million. In other words, it has proved to be a profitable venture.

Talks of Radhe’s hybrid release have been going around since a long time in the trade. Then, the argument was that the hybrid release won’t affect box office as not all have access to streaming platforms. Hence, those who want to see it in cinemas would still do so. However, things have changed a lot in the last few weeks. Theatres in most cities like Mumbai, Pune, Delhi, Ahmedabad, Rajkot, Jaipur etc are shut. There’s no guarantee if the administration in these places would allow cinemas to resume operations by May 13. In fact, cinemas in many more cities can also shut in the coming days since the pandemic refuses to die down. In such a scenario, one wonders where Radhe would get a theatrical release and what would be its collections from the few places where it manages to release in cinemas? Hence, most viewers would have no choice but to watch it in their homes. The question that now arises is – how many of them would actually pay a certain amount to watch Radhe on ZeePlex? Indian viewers are different from that of the USA and are still stingy when it comes to paying online for content. As a result, most viewers would access the film on pirated websites.

In other words, Radhe’s domestic box office would be very poor. While the number of people paying to view it on ZeePlex will also be very few. One then wonders how Zee Studios would be able to recover the Rs. 230 or Rs. 240 crores it has paid to producers Salman Khan, Sohail Khan and Atul Agnihotri to buy the film.

The other point of view is that a large number of viewers, especially the affluent one and those living in cities would be ready to shell out money to see Radhe on ZeePlex. Moreover, it will have a release Overseas where it’ll be released only in cinemas. In UAE, it’s expected to have a record opening as it releases on Eid, a huge festival there, and also because it’s the first big Hindi film to release in more than a year. The UK box office is opening up from May 11. USA, New Zealand and Australia markets are already back on track to a great extent. So the makers are hoping to recover a chunk of investment through international box office.