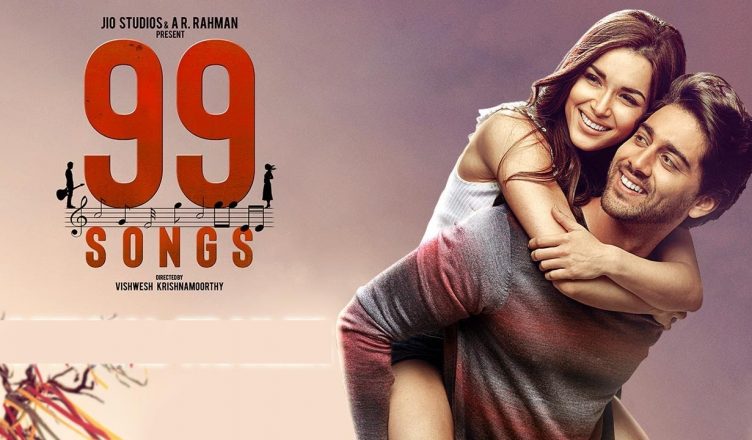 A R Rahman has firmly established himself as one of the greatest music composers of not just India, but across the world, more so after his Oscar victory. And now he starts a new chapter as his first production, 99 Songs, gets a theatrical release finally. The tri-lingual film has been in the making for a long time. But thankfully, it doesn’t look dated and the trailer promised a fine musical love story. Sadly, this visually spectacular film fails to entice because of the writing.

The story of the movie: As a child, Jay (Ehan Bhat)’s father (Diwakar Pundir) had stopped him from dabbling into music in any way. The father claimed that music destroyed his family and  hence, he should stay miles away from it. But when Jay grows up and after his father passes away, Jay couldn’t help but enter the forbidden field. He also gets into a relationship with Sophie (Edilsy Vargas), a mute artist who dabbles in fashion, sculpting, photography, painting etc. Jay slowly achieves some degree of success as a musician and singer. Sophie’s father Sanju Singhania (Ranjit Barot) is impressed with Jay and his talent. But when Jay asks him for Sophie’s hand in marriage, he advises him that merely dabbling in music would not give him and Sophie financial stability. He recommends that he heads his upcoming music streaming service project. Jay makes it clear that he wants to focus on music. To which Sanju says that if that is the case, then marriage is not possible and he’ll change his mind only if he could come up with that one song that can change the world.

99 Songs starts off in an unconventional manner. It takes a while to get the hang of the film’s theme. The film gets better in the scene where Jay and Sanju Singhania have the crucial conversation. The film then goes one step up in the Shillong sequences. The accident scene is chilling and hits viewers as it comes up suddenly. But the second half is where the film goes downhill. The makers add too many sub tracks in the film and in the process, the love story suffers. The finale is abrupt and the manner in which Jay’s song is shown going viral is difficult to digest.

Speaking of performances, Ehan Bhat puts his life and soul into the performance and it shows. As a newcomer, he’s sure to benefit as the role gave him an opportunity to display a wide range of emotions. Edilsy Vargas is a great find. She doesn’t have any dialogues but communicates beautifully. Sadly, she gets a raw deal in the second half. Ranjit Barot, popular music composer, does very well as an actor. Diwakar Pundir is okay and doesn’t look that old. Tenzin Dalha (Polo) has a crucial part and is quite brilliant. After Axone and Guilty, this actor once again delivers a memorable performance. Lisa Ray (Sheila) is confident and her scenes are quite good. Sadly, she is completely forgotten in the second half and that’s a major blunder done by the makers. Manisha Koirala is okay and it’s sad that she took up this inconsequential role. Warina Hussain is lovely. Ashwath Bhatt (CM Prabhakar) is fine but his track in the end is laughable. Rahul Ram is fine as the mysterious well wisher while Chaitanya Sharma’s track is random.

A R Rahman’s music is not upto the mark and that’s the biggest problem with the film, which is a musical. The music just isn’t memorable and won’t have a shelf life. The songs however work well in the film and one won’t mind it. But it’s not something which’ll make one search for it after exiting the theatre. The songs that stand out are ‘Humnawaa’, ‘Jwalamukhi’ and ‘O Aashiqa’. ‘Soja Soja’ is well shot and conceptualized. ‘Veere Kadh De’, ‘Nayi Nayi’, ‘Teri Nazar’, ‘Sofia’ and ‘Sai Shirdi Sai’ are average. A R Rahman’s background score has the theatrical and Opera feel.

A R Rahman‘s story has promise but Vishwesh Krishnamoorthy‘s screenplay is not upto the mark. The film packs in a lot and in the process, fails to do justice to the principle love story. Also, a few developments are devoid of logic and not well thought of. Hussain Dalal‘s dialogues are nothing great.

Vishwesh Krishnamoorthy‘s direction is a mixed bag. Technically, he’s very sound and that shows, especially the way he has handled the grandeur. Some scenes are well executed, like Jay in his childhood visiting a temple, mosque, church and gurudwara and finding inspiration for music in these places. Then the scene where Jay and Polo do a nusical face-off at Shillong’s jazz club is hilarious. But the director focuses a lot on metaphorical scenes. After a while, it gets too much and hampers the impact. He should have used the precious time in developing some characters and some tracks properly. Instead, he fails to do justice to the characters of Lisa Ray, Ashwath Bhatt and even the lead actress. Moreover, the finale is bizarre, especially the track of the Chief Minister, and one wonders how it got approved. However, even if logic and everything else was upto the mark, the film would have still not impressed due to the music score. Again, in the end, one can feel this. The makers are trying to prove that one particular song composed by the protagonist has gone viral but the song doesn’t seem to be so good that it can take the whole world by storm.

On the whole, 99 Songs is laced with some fine performances and visual appeal. But the music is not upto the mark, and that’s not good news for a film which is a musical. Also, the bizarre and illogical second half ruins the impact.