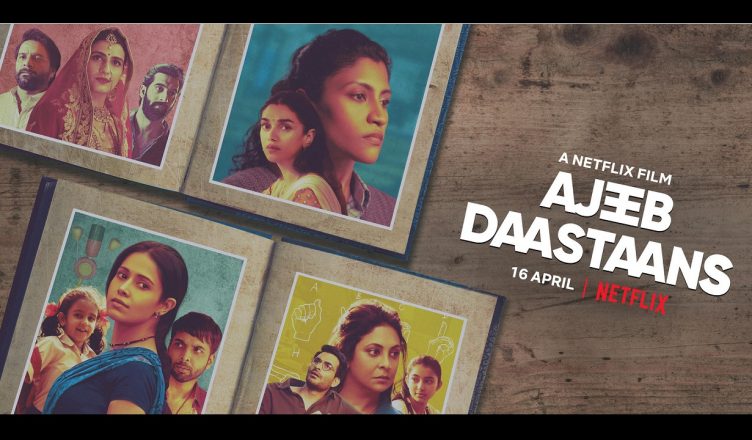 Ajeeb Daastaans consists of four short stories, each based on unconventional plotlines. It is directed by 3 prominent directors and one newcomer director, and some of the most reputed actors feature in these short segments.

1. Majnu (Directed by Shashank Khaitan)
It is a love triangle but with an unexpected twist in the finale. It was a great idea to place this as the first story as it’s quite impressive. It starts off as a usual Saheb Biwi Aur Gangster type drama but goes on an unpredictable path in the end. Fatima Sana Shaikh shines in the role of the seductress. Jaideep Ahlawat underplays his part and is too good in the last 5 minutes. Armaan Ralhan is a great find.

2. Khilauna (Directed by Raj Mehta)
On surface, it is the story of a house help trying to survive while serving her masters. But there are a lot of tracks in the film. The non-linear narrative adds to the intrigue. Sadly, director Raj Mehta takes too long to come to the point. A particular scene in the end is chilling to say the least. But one could guess the culprit beforehand. Talking of performances, Nushrratt Bharuccha is quite convincing as the maid. Abhishek Banerjee is fine but has done a similar role before, in Unpaused. Inayat Verma (Binny) and Maneesh Verma (Vivek Agarwal) are surprise packages of the film.

3. Geeli Pucchi (Directed by Neeraj Ghaywan)
This is the best story of the lot. It raises lot of issues about homosexuality, casteism, patriarchy etc and everything is well executed. The cute moments shared by the protagonists are sure to bring a smile. But it’s the last part which is one of its kind and never before seen. Konkona Sen Sharma is outstanding and proves yet again why she’s one of the finest actresses of our times. Aditi Rao Hydari is adorable and gives an equally brilliant performance.

4. Ankahi (Directed by Kayoze Irani)
This turned out to be the weakest one. The film had its moments and in the absence of dialogues in a lot of places, the background score by Tanuj Tiku enhances the mood. However, the character of Manav Kaul and his actions are very unconvincing. This gets magnified in the end. Thankfully, the performances are fine by both the actors. Shefali Shah looks stunning and yet again delivers a memorable performance. Manav Kaul, too, puts his best foot forward but is let down by the writing.

Special mention should also go to Studio Kokachi for the opening credits. It’s something to watch out for!

All in all, Ajeeb Daastaans is a fine effort and tries it’s best to surprise audiences with the ajeeb and unexpected twists. While the first and third stories are the best, the second one is average while the last one is poor. Nevertheless, it’s surely worth a watch.