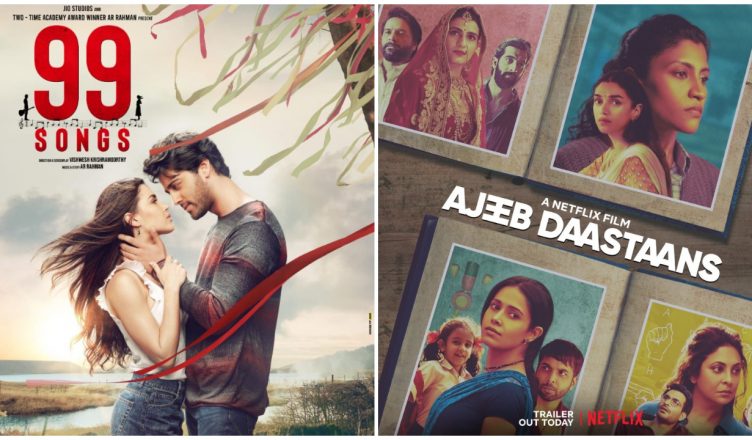 The lockdown has once again been imposed in Maharashtra due to the increase in Coronavirus cases. All Hindi film releases of April have been pushed ahead. Down South, the situation is still better but is gradually deteriorating. Yet, no one was prepared when the makers of Telugu film, Love Story, starring Naga Chaitanya and Sai Pallavi, announced that they have pushed their film ahead. Theatres are open down South but with the cases increasing, there’s a fear that theatres can get shut anytime.

However, the situation isn’t as alarming, as of now. Films are still being released in the South. And one film which hits the cinemas tomorrow is 99 Songs. It is produced by A R Rahman and the music maestro has also written the story besides composing the music. The film launches two newcomers, Ehan Bhat and Edilsy Vargas, and is the story of a singer. The film was conceptualized way back in 2015 and was shot soon after. It’s probably ready since 2018. Thankfully, it doesn’t look dated and a person who is unaware about when it’s shot would assume that it was filmed recently.

99 Songs is a trilingual film and will be released in Tamil, Hindi and Telugu. The film, however, has a lot of challenges. The trailer has not got a great response. And for a film which is publicized as a musical, it’s songs should have been picked up by now. Unfortunately, not a single song has worked in any way. Most viewers are not even aware that a film by this name is releasing. It’s Hindi version’s business will be poor as the main market of Maharashtra is shut. Even in other places, the increase in cases have led to a drop in the footfalls. And in some cities, a weekend lockdown has been put in place. In such circumstances, a film can’t score at the box office. And if a film releases without hype, then one can imagine how disastrous the business would be. However, the film might be able to do well in the Tamil version.

The other release is Ajeeb Daastaans, a Netflix original. It’s an anthology, produced by Karan Johar. The four stories are directed by Shashank Khaitan, Raj Mehta, Neeraj Ghaywan and Kayoze Irani. The star cast is interesting, comprising Jaideep Ahlawat, Fatima Sana Shaikh, Nushrratt Bharuccha, Abhishek Banerjee, Konkona Sen Sharma, Aditi Rao Hydari, Shefali Shah and Manav Kaul. The casting, the trailer and the title has sparked interest. It’s sure to trend, at least during the weekend, and would be a big talking point.