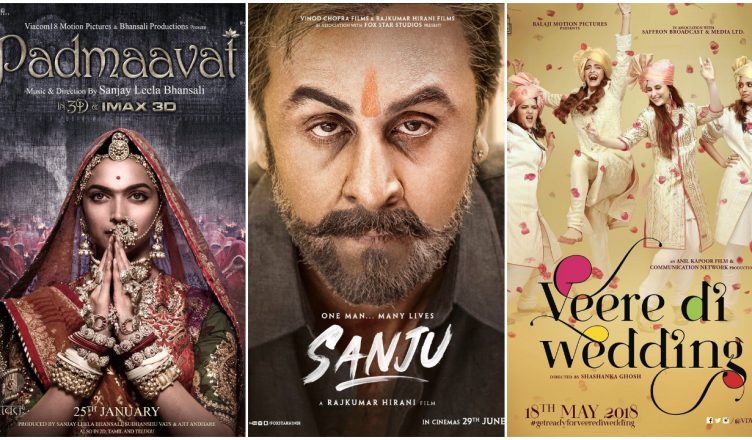 SANJU IS A BLOCKBUSTER; FIRST HALF OF 2018 ENDS ON A ROCKING NOTE!

Over the last few years, the mood of the Bollywood Talk posted in June-end or beginning of July is usually quite somber. After all, the first 6 months have more or less have been dull over the years. Last year, the first half ended on a disastrous note after the biggie Tubelight, starring Salman Khan, crashed in a few days and led to massive losses for its distributors. With such instances happening repeatedly in the first six months, the mood wasn’t that upbeat when 2018 commenced.

However, 2018’s first half has gone beyond expectations! Each month has been full of surprises and super hit films. Bollywood got it’s first blockbuster in January itself when Padmaavat released despite a slew of controversies. It didn’t release in almost 4 major states and yet, became a blockbuster, earning more than Rs 280 crore, a figure unheard for a January release before! February saw the surprise success of the comic caper Sonu Ke Titu Ki Sweety. A film having a not-so-popular cast raked in almost Rs 100 crore and it led to cheer in the industry. March saw three back-to-back successes: Raid, Hichki and the monstrous blockbuster Baaghi 2. In April, the offbeat flick October, starring Varun Dhawan, could have easily flopped considering its niche appeal. But even this film did decent business! April ended with a high with the super-success of Avengers: Infinity War. The fun continued in May when 102 Not Out got the cash registers ringing. The excitement was there for Raazi but nobody imagined in their wildest dreams that it would do almost Rs 120 crore! This is a first for a women-centric film! Parmanu released all of a sudden sans any promotions and yet managed to cross the Rs 60 crore mark! The first day of June saw the release of Veere Di Wedding. Not many were sure if this flick would work considering its all-female cast and adult theme! But it worked and how! Race 3 got thumbs down and many expected it to go the Tubelight way. It fell after a point but not as badly as one expected and it’s lifetime is expected to be in the Rs 160 crore. And that’s not bad for a film that had negative buzz and terrible word of mouth.

And finally, Sanju released on June 29 and it proved to be an icing on the cake. Directed by Rajkumar Hirani, it is the biopic of Sanjay Dutt and starring Ranbir Kapoor. The excitement for the film was significant. But who could have told that Sanju would be able to cross the coveted Rs 200 crore mark in just one week?! And this is terrific considering the somewhat dark theme and that Ranbir hasn’t had given a huge hit in a while. Some trade analysts even feel that it can cross the Rs 374.53 crore mark of Dangal and thus emerge as the biggest grosser ever of Bollywood! Even if that doesn’t happen, Rs 250 crore is at least on for Sanju and that’s tremendous!

Now all eyes are set on the second half which should be equally exciting. Films like Dhadak, Gold, Batti Gul Meter Chalu, Yamla Pagla Deewana Phir Se, Sui Dhaaga, Namaste England, Thugs Of Hindostan, Student Of The Year 2, Kedarnath, Total Dhamaal, Zero and Simmba should work big time and rake in a lot of moolah and impress audiences. The feeling is unimaginable and this is truly deserving and much needed, especially after a spate of dry years!