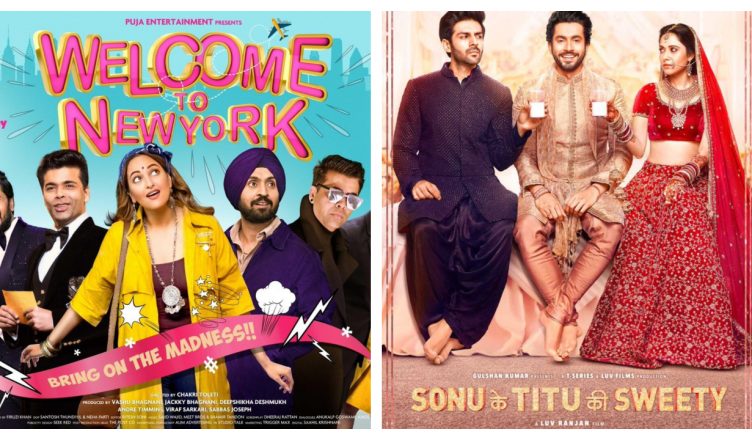 Now that both Pad Man and Padmaavat are out in theatres, the stage is set for those films to release that had to be pushed ahead on account of the postponement of these two films. Two significant films release tomorrow – one is a clear winner while the one seems like a loss maker. My analysis:

SONU KE TITU KI SWEETY: It’s made by the Pyaar Ka Punchnama gang – director Luv Ranjan and actors Kartik Aaryan, Nushrat Bharucha and Sunny Singh. The film didn’t quite make noise when it was being made but the excitement for the film grew manifold once its trailer was out. The film looks like a great entertainer and something that the youth should lap it up. It speaks of a relatable problem of a guy who is jealous of his best friend’s partner. The humour content looks quite nicely done and the characters speak today’s lingo. At the same time, it doesn’t quite get urban, multiplex-like and this is something that can work with audiences across India. It is based in the North and that’s where it can do its best business.

Interestingly, just around two months ago, another such small film – Fukrey Returns – had arrived. Just like Sonu Ke Titu Ki Sweety, this film was a comedy, starring not-so-famous names and was set in the North. And it generated tremendous excitement because of which it took Rs. 8.07 crore opening, which amazed the trade and industry. That Fukrey Returns released in a ‘dry’ period was also a big factor. But Sonu Ke Titu Ki Sweety also releases at a great time. The blockbuster Padmaavat will see a downslide in its collections. Pad Man sadly has underperformed and will further fall. Aiyaary is a disaster. Hence, Sonu Ke Titu Ki Sweety has real chances of being the Fukrey Returns of 2018! The opening definitely should be huge and then it will depend on the content that will decide how far it can go.

WELCOME TO NEW YORK: This is India’s first ‘stage reality’ film and was shot during the IIFA Awards held last year in July in New York. It stars Sonakshi Sinha and Diljit Dosanjh and has a double role by Karan Johar. When it was being shot, it was called Crazy Hum. Then it was announced that it has been renamed as Bang Bang In New York. Then, in around 48 hours, they settled for Welcome To New York as the title! Sadly, the trailer has not worked at all. The humour is there but it suits the award shows more rather than a film. The cameos by Salman Khan, Rana Daggubati and Sushant Singh Rajput haven’t added to the hype. And for some reason, the film is in 3D. The buzz is just not there and hence, the opening is going to be very poor and even the lifetime might find it difficult to cross Rs. 20 crore.

WOULD YOU LIKE TO SEE SONU KE TITU KI SWEETY OR WELCOME TO NEW YORK AND WHY? DO LET ME KNOW!