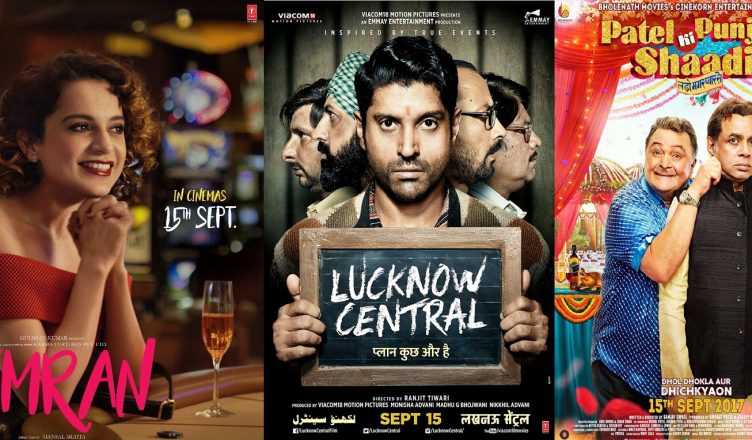 WILL SIMRAN EMERGE AS A SLEEPER HIT?

Just like last week, this week and even the upcoming Friday are going to be a dry one. Talking about tomorrow, three diverse films are releasing with only the first one having some sort of a chance. My analysis:

SIMRAN: It stars Kangana Ranaut in a leading role and is directed by Hansal Mehta. Unlike other Hansal films, this one looks light and comic. It is inspired from true events and features Kangana as a divorce who can’t let go of her gambling and robbing habits. From the trailers, it looks like nice, simple fare but it’s not a trailer that’ll make viewers rush to the theatres. As a result, the opening will be poor but if the film turns out to be a great film, it can have a huge jump in the collections from the second day. The recent Aap Ki Adalat episode involving Kangana wherein she made some shocking statements have put the spotlight on the actress but not much on the film.

LUCKNOW CENTRAL: It deals with a group of prisoners using the opportunity of starting a band to escape from jail. The storyline is uncannily similar to Qaidi Band but that won’t be a problem since Qaidi Band came and went without any noise. Even then, Lucknow Central is at a disadvantage as the film just doesn’t look interesting at all, despite the presence of talented actors like Farhan Akhtar, Diana Penty, Deepak Dobriyal, Ronit Roy, Rajesh Sharma and Gippy Grewal. Forget a poor opening, it can have a disastrous opening. In the beginning of the year, a film like Running Shaadi, despite the presence of popular actors like Amit Sadh and Taapsee Pannu, earned only Rs 10-12 lakhs on Day 1. Similarly, Lucknow Central might open at a less than a crore.

PATEL KI PUNJABI SHAADI: It’s a delayed film starring Paresh Rawal, Rishi Kapoor, Vir Das and Payal Ghosh. The premise is interesting and massy but the treatment looks outdated. It does have a chance in Gujarat due to the local flavour but in the long run, it needs to be really great to have decent collections.