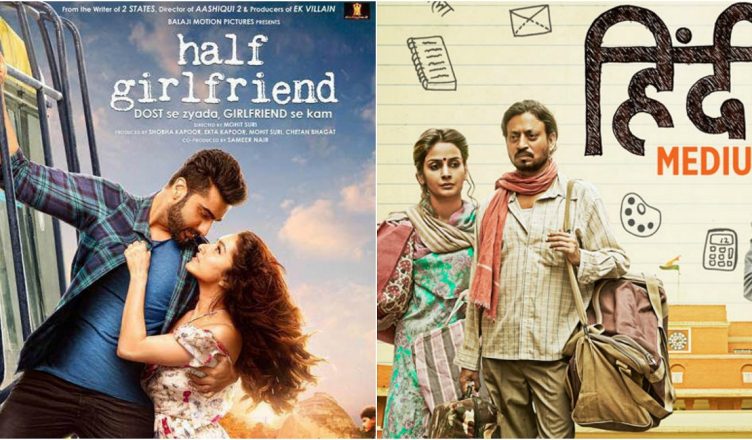 Just like last week, this Friday too will see the release of 2 films. While Meri Pyaari Bindu and Sarkar 3, that released last week, didn’t stand much of a chance (as predicted in last week’s Bollywood Talk) and expectedly, have failed, this week’s releases surely would fare much better. My analysis:

HALF GIRLFRIEND: It is adapted from Chetan Bhagat’s bestselling novel of the same name and what’s more, the author has turned co-producer with this film as well. Mohit Suri is the director while Arjun Kapoor and Shraddha Kapoor feature in leading roles. Mohit is synonymous with some great music and Half Girlfriend album is no exception. It is not as great as his recent films like Hamari Adhuri Kahani, Aashiqui 2 and Ek Villain but the songs can grow after the film is out. The last film made on Chetan Bhagat’s book 2 States was a huge hit and even crossed 100 crore. Half Girlfriend however won’t be able to do so as the hype is limited. Also, 2 States appealed to the family audiences due to its theme while Half Girlfriend sadly doesn’t have such an appeal. It can surely work if response is positive but expecting it to cross 100 crore would be too much.

HINDI MEDIUM: It stars Irrfan Khan and Pakistani actress Saba Qamar. It is directed by Saket Chaudhary, who previously helmed Pyaar Ke Side Effects and Shaadi Ke Side Effects. The trailer of the film is damn impressive and hilarious. It makes a great comment on the flaws of the education system. But it’s presented in a light-hearted, funny way. Sadly, such films are counted as ‘niche’ and ‘multiplex films’ in India. However, Hindi Medium has the potential to impress a large section of society if given a chance. The response however has to be positive. Going by the initial reports, the film is a winner. Unfortunately, it’s releasing with a bigger film like Half Girlfriend which has obviously taken away a large number of screens. Also, the Baahubali 2 wave is still going strong and it is going to retain a significant amount of theatres. Yet, Hindi Medium can somehow have its way if made well!