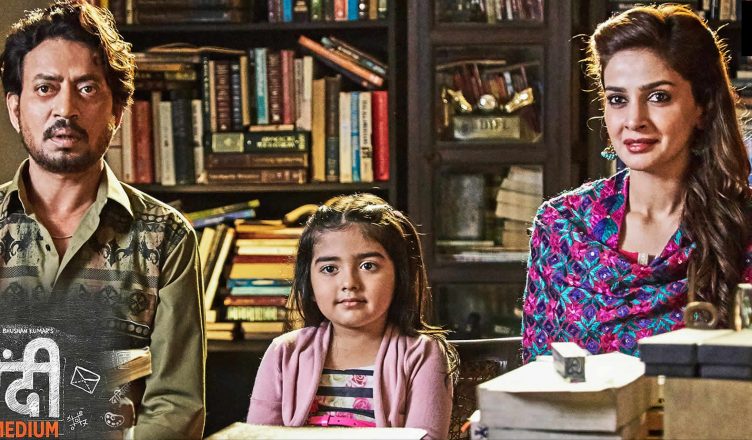 In India, speaking in English is considered ‘cool’. One considers itself as belonging to an upper class the moment one starts conversing in the language. This has become the unwritten rule of our society and it has become acceptable in such a huge way that the impact on the Hindi-speaking junta is tremendous. They always feel a bit inferior but almost all of them are of the opinion that so what if we can’t speak English? Our children will definitely do so. Hindi Medium is based on this idea and it is told in a very entertaining and light-hearted manner. The performance of Irrfan Khan is like an icing on the cake!

The story of the movie: Raj Batra (Irrfan Khan) owns a big garment shop in Chandni Chowk, Delhi and is doing fairly well. He is married to his childhood love Mita (Saba Qamar) and they have a lovely daughter Pia (Dishita Sehgal). Mita wants Pia to be admitted in any of the top 5 English schools in Delhi and for that, she is ready to do anything. Raj has no choice but to adhere to Mita’s stubborn demands. However, they soon realize that the process is going to be a long-one and exhausting one. From shifting their house to the upmarket Vasant Vihar to hiring the services of a counseling center to even pretending to be poor, Raj and Mita do whatever it takes to get Pia admitted in an elite Delhi school.

Hindi Medium begins on a sweet note which is something to watch out for. The makers should probably mention ‘Don’t miss the beginning’ advice on their advertisements in newspapers and magazines. Irrfan’s entry is hilarious and rocking and from here on, there’s enough laughter in adequate doses till the intermission point. It is amusing to see Raj and Mita trying to go through the education process and at times, making a fool of themselves. At the same time however, it also makes a critical observation of how our education system has become so complex and a business. The intermission comes at a great point. While the first half is devoid of any complaints, the second half however has some blemishes. For around 15-20 minutes, the story shifts and goes on another track in a way. The focus soon shifts back on the principle plot and there are some great moments out here as well – some funny and some emotional. The interest level however does dip slightly. The climax is nice but it’s unconvincing. But thankfully, the message comes out loud and clear.

Hindi Medium belongs to Irrfan Khan – no two doubts about that! The actor has given some outstanding performances in the past and yet, he’ll surprise viewers with this film. He’s highly adorable as he accepts all the demands of his wife with regards to Pia’s admission, brings his own humorous suggestions, watches Naagin’s TV show and a lot more. At the same time, he’ll move viewers with the emotional scenes. Definitely this is one of the best performances of the year! Saba Qamar looks lovely and gives a first-rate performance. The actress gets a great character to play and gets totally into its skin. She is a Pakistani and it’s sad that we might not get to see her in Bollywood for few years at least or maybe never. Disha Sehgal is good but doesn’t speak much. In fact, her character doesn’t do much except observe the madness obediently. One wishes if she also had more to contribute especially since the whole film is centered on her. Deepak Dobriyal (Shyamprasad) has a late entry but rocks the show with his supporting performance. It’s as great as his mighty performance in Tanu Weds Manu Returns. Tillotama Shome (counselor) also has a brief role but leaves a tremendous mark. The actress has given several memorable performances but it’s with Hindi Medium that she’ll get noticed in a big way. Amrita Singh (Delhi Grammar School principal) and Swati Das (Tulsi) are decent. Sanjana Sanghi (young Mita) and Delzad Hiwale (young Raj) are lovely. Neha Dhupia and Sanjay Suri are okay in special appearances.

Sachin-Jigar’s music is decent. Hoor is the best track followed by Ek Jindari. Sukhbir’s Oh Ho Ho Ho is well incorporated in the film while Suit is played during the end credits. Amar Mohile’s background score is a bit quirky. Veera Kapur Ee’s costumes and Mustafa Stationwala’s production design are praiseworthy. The story shifts from a middle class neighborhood to a high class to a lower class one and in all these three ‘worlds’, the costumes and sets are very authentic and give a realistic touch. Amitosh Nagpal’s dialogues mare smart and hilarious but could have been more impactful in the climax. Zeenat Lakhani and Saket Chaudhary’s story is unique and highly relatable. The screenplay too is quite effective but goes a bit off track and unconvincing at places in the second half. But a good work overall nevertheless. Same goes for Saket Chaudhary’s direction. He has handled Pyaar Ke Side Effects and Shaadi Ke Side Effects which were also quirky and even unique in a way. Hindi Medium to an extent also is on similar lines. A fine work by Saket and hope he continues to make such nice, entertaining films!

Some of the best scenes:
1. The intro scene
2. Adult Raj’s entry (hilarious)
3. Raj, Mita and Piya shift from Chandni Chowk to Vasant Vihar
4. Party at Raj-Mita’s Vasant Vihar house
5. All scenes of the counselor
6. Raj stands in a queue at dusk for school admission form
7. The intermission point
8. Shyamprasad’s entry
9. The car accident and the sequence thereafter
10. Shyamprasad arrives with bananas for the ‘well wisher’ (highly funny and touching)
11. The climax

On the whole, Hindi Medium is highly entertaining flick that serves a great message to our English-obsessed society. There are loads of funny moments that bring the house down but at the same time, there are some touching moments too which make an equal impact. Sadly, at a few places, the film is highly unconvincing. But the plusses outweigh the minuses. This is a film that should be savoured by the whole family!

One thought on “Movie Review: HINDI MEDIUM by FENIL SETA”