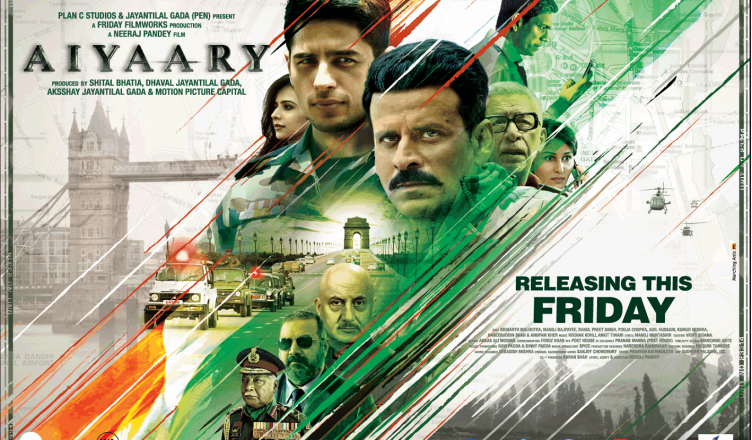 Our defence system is one of the strongest and the best in the world. Most of our films however have not shown much on this aspect. There have been films based on cross border terrorism, naxalism, wars etc. But not all wars are fought on the border. Neeraj Pandey’s Aiyaary attempts to bring the unknown, unexplored side to the fore. Sadly, the film is long, confusing and would go bouncer for most viewers!

The story of the movie: Major Jai Bakshi (Sidharth Malhotra) is a bright young chap in the Indian Army, who has trained under Colonel Abhay Singh (Manoj Bajpayee). Jai is given the responsibility of intercepting calls and that’s when he realizes how the political class is using taxpayer’s money to further their own interests. But what shocks Jai the most is when he stumbles upon the fact that there’s corruption in the Army as well. Retd. Lt. General Gurinder Singh (Kumud Mishra) offers General Pratap Malik (Vikram Gokhale) a heavy bribe. In return, he requests him to buy arms and arm materials from an arms dealer of his choice at the four times the actual cost. Realizing that by being in the system, he won’t be able to fight these villains, Jai decides to go off the radar. Assuming that he has gone rogue, Abhay decides to bring Jai to task. But Jai is too smart and plays his game well. Moreover, he also has the support and technical help of Sonia (Rakul Preet Singh).

Knowing that Aiyaary is 160 minutes long, I assumed that things will move slowly and it will take a while for the dots to join. Hence, I patiently sat through the film with full trust on director Neeraj Pandey to rock the show, like he has in his previous films (A Wednesday, Special 26, Baby and M S Dhoni – The Untold Story). The first half has its moments, but not many. Also, there are far too many characters and timelines and it takes a while to get a hang of things. The first half culminates with a bang. The intermission point is surely the best part of the film. The second half begins well and one waits for that moment when the film will go on a high. Alas, that never happens! The more it progresses ahead, the more it messes up things. So many questions are left unanswered. It’s difficult to comprehend what’s happening in the last 20-25 minutes. Suddenly, the focus shifts from arms deal to residential building scam. One still waits, hoping that the very final scene might sum up the film well. But that never happens. The film ends abruptly and credits start rolling, leaving viewers dazed, confused and angry!

Aiyaary boasts of some fine performances, which keep the interest going. Sidharth Malhotra as always delivers a very sincere and earnest performance. He doesn’t get in the ‘herogiri’ mode and yet one can’t help but hoot for him. Manoj Bajpayee rocks the show as always. Aiyaary might not work but it would always be remembered as one of the best performances from this highly talented actor. The way he interrogates, meets up his opponents, follows them and tries to get past hurdles is seen to be believed. His entry scene is clapworthy. Rakul Preet Singh looks very cute and performance wise, she is first rate. She has a very crucial role in the film and not given arm candy status. Pooja Chopra (Maya) looks quite convincing as an intelligence official and does a fine job. Sadly, she gets limited scope. Kumud Mishra dons a great look which suits him to the T. He does very well in the initial scenes. But his performance suffers in the second half on account of the writing. Vikram Gokhale is hardly there in the second half but in the first half, he handles some important scenes nicely. Naseeruddin Shah (Baburao Shastri) rocks the show in the pre-climax. His flashback portion is very touching but in the overall film, it doesn’t work that much. Anupam Kher (Tariq Ali) and Adil Hussain (Mukesh Kapoor) are decent. Rajesh Tailang (K Srinavas) is fair. The actors playing Abhay’s wife, reporter Kavya and Chiru the informer are quite good.

Music doesn’t get much scope. Only one song is there in the film – Lae Dooba – and it’s sweet. In fact, one of the best parts of Aiyaary is the romantic scenes and that’s not good news for a film that’s essentially a spy thriller. Sanjoy Chowdhury’s background score is exhilarating and induces tension in the narrative. Sudheer Palsane’s cinematography is superb. Narendra Rahurikar’s production design gives the film a rich, authentic look. Falguni Thakore’s costumes are appealing, especially the ones worn by Sidharth and Rakul. Praveen Kathikuloth’s editing is not so slick, as per the trademark Neeraj Pandey style, but it works.

Neeraj Pandey’s story is convoluted and his screenplay does nothing to make it better. Dialogues are simple and sharp but could have been better in a few scenes. Neeraj Pandey’s direction is complicated, which further takes the film down. He starts the film from mid-point but that’s fine as one hopes that things will be simplified later on. But shockingly, he confuses the viewers further by adding more subplots and then taking the film to an altogether new direction in the climax. It is shocking to know that Aiyaary is made by the same director who handled a difficult film like Baby, which also had a lot of characters, locations, etc but never got confusing even for a moment.

On the whole, Aiyaary is a huge disappointment and the weakest film of Neeraj Pandey. The film has some fine moments and great performances. But the narrative is too confusing and complicated and ends on an abrupt note, leaving viewers dazed, shocked and angry! Avoid!