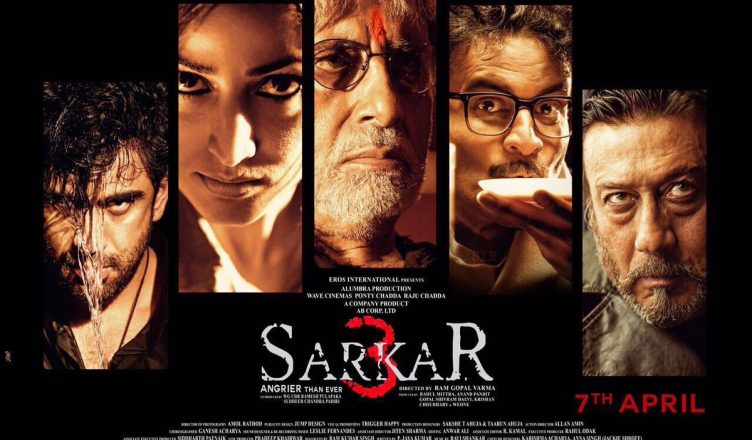 Amitabh Bachchan in an interview to Bombay Times recently made some interesting points about VIPs. To quote Big B, “(There are) several rings of power points around every powerful individual, be it a king, president, prime minister or any celebrity. Isn’t it possible that each ring inadvertently becomes a power centre and has its individual influence?” Sarkar and Sarkar Raj till now just touched upon these topics. Sarkar 3 is based entirely on this idea. The premise must have looked good on paper but as a film, it fails to work. The second part was a disappointment but the first part was quite terrific. Sarkar 3, from the promos, seemed like it will be as good as the first part. The reality however is that it stoops even below the second part.

The story of the movie: Despite facing severe personal tragedies, Subhash Nagre aka Sarkar (Amitabh Bachchan) continues to wield power. He gets an offer from an influential builder Gandhi (Bajrangbali Singh) one day. As per the offer, he’ll be paid handsomely if Sarkar helps evict slumdwellers from a large plot of land. Sarkar realizes that this would devastate the poor people’s lives and refuses. Gandhi decides to teach Sarkar a lesson. His mentor Michael Vallya (Jackie Shroff), based in Dubai, decides to do so with careful planning. On the other hand, Sarkar’s grandson Shivaji (Amit Sadh) joins Sarkar in his work. There’s also Anu (Yami Gautam) who wants to avenge the death of her father by Sarkar. Finally, Govind Deshpande (Manoj Bajpayee) is a rising politician who is provoking the aam junta against Sarkar. How all these characters, with their agendas, come together and wreak havoc forms the crux of the film.

Sarkar 3 begins well as the setting is re-established and the new characters are introduced. The script however lacks punch despite the twists and turns and action-packed scenes. The tiff between Shivaji and Sarkar’s trusted right hand man Gokul (Ronit Roy) is not entirely convincing. The pre-interval sequence and intermission point does up the interest. Also, post-interval, when Sarkar gets into a tough battle with his enemies, the film does get slightly engaging. But it never really involves viewers as it all looks forced. Few developments are bewildering while some questions are left unanswered even after the film gets over! The twist in the climax is certainly shocking but comes too late in the day.

Amitabh Bachchan however rises above the script. The actor gets into another territory when he plays Subhash Nagre, be it the dialogue delivery, the expressions or even the intensity in his eyes. Amit Sadh too surprises by giving a bravura performance. The film is sure to fail but Amit definitely will be noticed big time. It’s high time this talented actor gets meatier roles in big films! Ronit Roy for a change is not playing an entirely negative character and does a fine job. Yami Gautam is good but again, just like in some of her previous films, she has very limited screen time. She deserves better and bigger roles. Manoj Bajpayee delivers a great performance although his role is quite small. Bajrangbali Singh does fine and looks evil. Jackie Shroff seems dashing but his conversations with his girlfriend (which forms the major part of his screen time) are unimpressive. Parag Tyagi (Raman) and Bharat Dabholkar (Gorakh) are okay. Rohini Hattangadi (Rukku) and Supriya Pathak (Pushpa) don’t have much to do.

The ‘Govinda Govinda’ background score, a staple in all Sarkar films, is incorporated in Sarkar 3 as well. But it’s badly used. The music starts off at any random moment that hampers the impact. Amol Rathod’s cinematography is fine while Allan Amin’s action is realistic. Nilesh Girkar’s story is nothing great but has the potential to be made into a hard-hitting film. Ram Kumar Singh’s dialogues are underwhelming and are nowhere close to the powerful dialogues of the first part. Ram Gopal Varma’s direction is not that great. The director doesn’t seem to be in top form the way he was a decade ago with Sarkar, Company, Satya etc. The way he has badly utilized the background score and the haphazard way in which music starts and ends anywhere are instances of that.

On the whole, Sarkar 3 is plain disappointment and worse than Sarkar Raj. The new characters and the confrontations are just not exciting enough. There are a few twists in the tale that raise interest but they are too little and come too late in the day. Amitabh Bachchan however is terrific and if the film should be watch, it’s only for him!