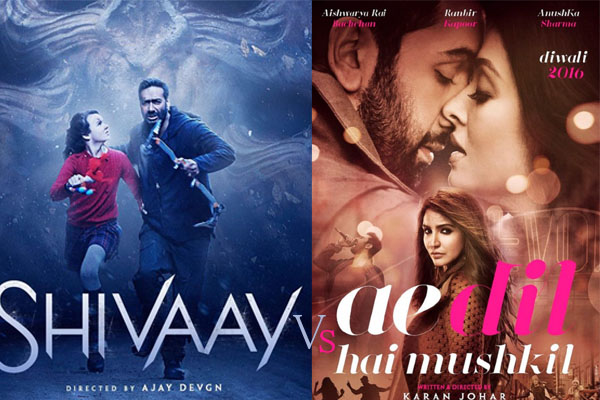 The biggest clash of the year is here! The Diwali week begins tomorrow and viewers will get a chance to catch 2 biggies in theatres. My analysis on these films:

AE DIL HAI MUSHKIL: It is directed by Karan Johar and stars Ranbir Kapoor, Anushka Sharma and Aishwarya Rai Bachchan. Fawad Khan also features in the film in a cameo. The film has been making waves ever since it’s unconventional and exciting casting was announced way back in 2014. The teaser of the film did the trick and the songs and trailer added to the hype. The film got into problems due to the presence of Fawad (a Pakistani actor) especially after Uri Attacks. A section of trade believes the anti-Pakistan sentiment might hurt the film. But the excitement is very high and not to forget, it’s festival time. Yes, it clashes with Shivaay but if all goes well, Ae Dil Hai Mushkil can still work and emerge as a huge hit, especially if the reports are positive!

SHIVAAY: It is directed by Ajay Devgn and also stars him in a lead role. It is his dream project that took quite a while to be made. A major portion is shot in Bulgaria in minus 22 degrees and from the trailers, it looks great. Even the action scenes will be worth watching on the big screen! Songs sadly have just not made the desired impact. A big commercial film needs songs to up the excitement and Shivaay boasts of no such songs. Hence, it relies mostly on positive reports to ensure it becomes a hit. Also, the cost is high.

WOULD YOU LIKE TO SEE AE DIL HAI MUSHKIL OR SHIVAAY AND WHY? DO LET ME KNOW!