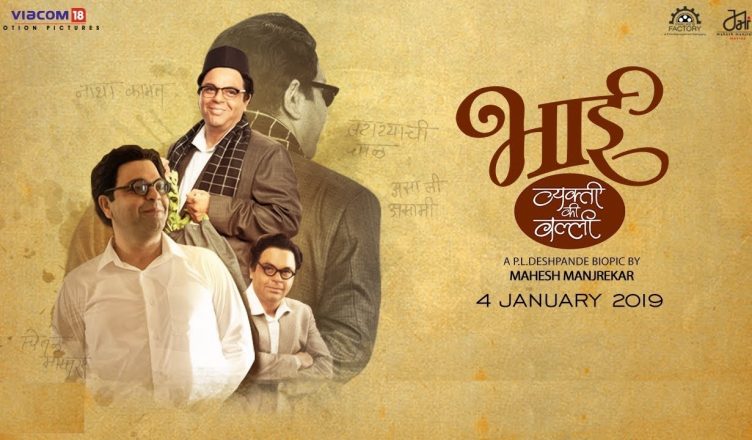 Bhaai – Vyakti Kee Valli is the first part of the two-part series on the life of the celebrated Marathi author, humourist, singer and actor Pu La Deshpande. The man was quite an interesting personality and his life has been such that it is apt for a biopic. Unfortunately, the treatment is heavily flawed. The part 1 is 2 hours long and it doesn’t flow properly. There’s no conflict as such although Bhai faces a lot of ups and downs in his life. Also, the film jumps many months and at times years at places but the makers don’t mention the date anywhere in the film. As a result, it becomes difficult to initially comprehend if Bhai is in Belgaum or Pune or someplace else. The last 10 minutes of the film is quite entertaining when seen individually, but as part of the film, it seems a bit out of place. And then the film ends abruptly. The glimpse of the second part is shown in the finale and it will delve into the later years of his life. Again, it seems very interesting but it remains to be seen if the sequel will also suffer from such a poor execution. Lastly, a biopic on similar lines, Ani…Dr. Kashinath Ghanekar, arrived just two months ago and it has become a benchmark of sorts for such kind of films. And Bhaai – Vyakti Kee Valli certainly doesn’t reach to that level. On the positive side, technically, the film is strong, few scenes are exceptionally directed and performances are exemplary. Sagar Deshmukh owns the film and rises above the script. Sachin Khedekar is lovable in the supporting role. Irawati Harshe proves her worth yet again. Others also do well. All in all, Bhaai – Vyakti Kee Valli is an average fare and if you really want to go for it, make sure you keep your hopes low!