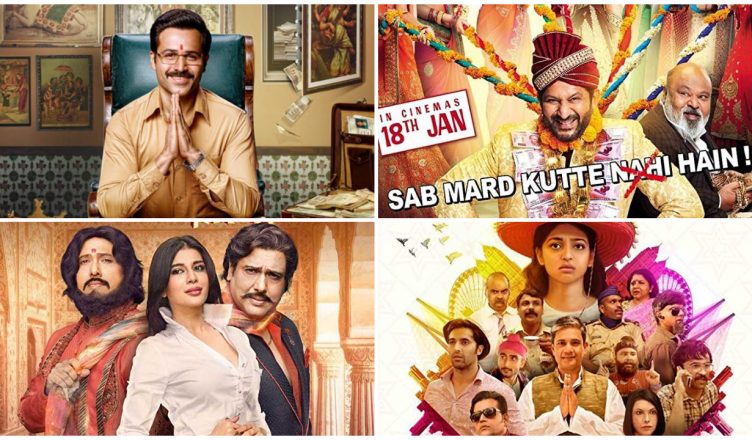 A DRY FRIDAY BEFORE THE BIG REPUBLIC DAY WEEKEND!

The first big holiday of the year – Republic Day – will fall next week. A week before, that is tomorrow, as many as 4 films will release but barring the first, all other 3 films don’t seem exciting and will have a tough time. My analysis:

WHY CHEAT INDIA: It was earlier named Cheat India but the Censors raised objection to this title. Hence, ‘Why’ was added in the beginning, prompting many, including actor-producer Emraan Hashmi, to ask ‘Why’ was the title changed! The change of title in no way makes much of a difference, especially when the earlier one was found to be derogatory. The film however is on the interesting topic of cheating mafia during exams which is a very big problem of our country. Emraan plays a smart guy who has found a hack in the system and has no qualms in exploiting it. The trailer is interesting and Emraan looks in his element. Besides the title change, the film faced few roadblocks, but not major ones. Firstly, it’s director Soumik Sen got under the #MeToo scanner. Thankfully for him and the film, it didn’t turn into a storm like in the case of Sajid Khan and Nana Patekar. Secondly, the film was initially scheduled to release on Republic Day. But realizing that clashing with Thackeray and Manikarnika – The Queen Of Jhansi would be foolhardy, the makers preponed the release by a week. They also did a press conference wherein they invited Aaditya Thackeray, grandson of Shiv Sena founder Balasaheb Thackeray, on whom the film is based, just to show that it’s all amicable. At the box office, the buzz for the film is quite less and this would reflect in its opening. Why Cheat India should open at around Rs. 2.5-3 crore. If response is good, the collections can go on a high in the weekend. However, it has just one week to collect well since there are two big films releasing next week. Also, last week’s Uri has turned out to be a super-hit and it’ll also affect the collections.

FRAUD SAIYAAN: This is a delayed film but fortunately for the makers, it doesn’t look dated. It stars Arshad Warsi in a lead role and is about a con guy who gets married to various women and then runs away with their money. It also co-stars Sara Loren, Saurabh Shukla, Flora Saini, Varun Badola and Elli AvrRam. The film looks like a nice comic caper but has chances to do well in television than in cinemas. The opening can still be in the range of Rs. 60-70 lakhs and only if response is extraordinary can this go anywhere.

RANGEELA RAJA: It stars Govinda in a double role and is produced by Pahlaj Nihalani. The film was to release initially on November 16, 2018 but the Censor Board played dirty games. They dilly-dallied in watching the film after it was submitted. And then they asked for lot of cuts. Pahlaj Nihalani, who has earlier been a CBFC chairperson, refused to take these cuts since as per him, he has made the film according to the guidelines. He therefore demanded a U/A certificate with no cuts. He moved Court and later the film was passed in December 2018 with 3 cuts and U/A Certificate. This controversy made lot of noise since Pahlaj himself had asked for cuts in lot of films and this time he was at the receiving end. The buzz for the film then was bit more. Now, it’s very limited. It might open well in the mass centres and single screens and has no chance in multiplexes. Govinda’s recent films like Aa Gaya Hero and Fry Day opened at less than Rs 30 lakhs. Rangeela Raja hopefully will open at around Rs. 40-50 lakhs which is still a poor opening.

BOMBAIRIYA: Again this is a delayed film and has an ensemble cast comprising of Radhika Apte, Siddhanth Kapoor, Akshay Oberoi, Adil Hussain, Ravi Kishan, Amit Sial and Shilpa Shukla. It seems to be about the events that occur in the lives of these people in a day (or maybe two). The trailer is entertaining and funny. But it looks quite niche and promotion wise, it has failed to make any noise. In fact, the marketing has been zilch. Very few people are aware of its release. As a result, it’s opening can be very less, around Rs. 25 to 35 lakhs. If response is very, very good, then it can give tough competition and do better than Rangeela Raja.