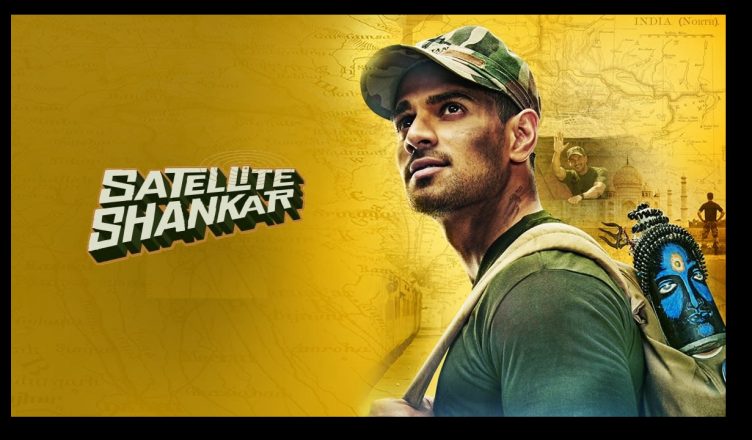 For me and many others, November 8 is akin to a black day. After all, this was the day when the demonetization drive was announced four years back. It led to absolute chaos and didn’t fulfill the primary agenda while destroying the lives of many. However, since last year, November 8 no longer brings back horror memories. And that’s because a very unique, entertaining and touching film released on this day in 2019. It’s one of the best films you’ll see in your lives. But the unfortunate part is that most of the moviegoers have not seen it and thus have missed a classic.

I am speaking about Satellite Shankar. Starring Sooraj Pancholi in the lead, it is the story of a young, happy-go-lucky soldier stationed in Kashmir. After his 8-days leave gets approved, he sets off to his hometown in Pollachi, Tamil Nadu to meet his mother. Things however go wrong as he misses his trains and has to take multiple detours. However, he also touches the lives of many people that he encounters on the day and thus, it becomes the most satisfying journey of his life.

The reason the film is titled Satellite Shankar is because the lead character is named Shankar. As for Shankar, that’s because he carries with him an idol of Lord Shankar. He pretends that it’s a satellite that can help him connect to anyone in the world. With this little trick, he keeps the officers motivated, despite them not getting leaves. Later, he also uses this idea to spread cheer for citizens whom he bumps into on the way.

I have to admit, the first 15 minutes of the film are not that impressive. The manner in which the concept of the satellite is explained seems bizarre. You might wonder why did you even start watching this film in the first place! But I request you to have patience. Let Shankar get injured in the cross-firing with Pakistani soldiers. Let his leave get approved and let him start his journey. From hereon, the film goes on another level! This is especially after he meets Meera Bakshi (Palomi Ghosh), a vlogger, and how she becomes instrumental in making him an overnight hero of the nation. The intermission point gives goosebumps. Many films suffer from the curse of the second half. Satellite Shankar is a solid, rare exception. The film gets better and better as it progresses. The last 20 minutes are out of the world as the whole India gets involved in his journey. I don’t want to divulge much but only wish to say that – you have to see it to believe it and you have never seen anything like this before!

I was fortunate to watch this film at a press show in Mumbai’s PVR Juhu, on November 6. The mood at such shows can sometimes be quite negative, especially for utopian and commercial films like these. I usually don’t get swayed. But I regret the fact that I got influenced by the way some critics were reacting and trolling to this film. I wonder why it happened to me because I am usually someone who enjoys massy fares a lot. In the case of Satellite Shankar, I enjoyed the film but needlessly also picked up flaws. My original rating then was 3 out of 5. However, when I saw the film again, I was blown away completely! I kicked myself for changing my opinion because of the high-nosed critics around and I promised myself never to do that again.

Satellite Shankar is a team effort and I’d like to mention some of those who took this film to dizzying heights. Firstly, the writers Vishal Vijay Kumar and Irfan Kamal deserve kudos for their topnotch and entertaining script, in the zone of Bajrangi Bhaijaan and Rajkumar Hirani films. Yet, they manage to make it stand out, and how! I was fortunate to meet Vishal Vijay Kumar at the press show who revealed a very interesting trivia about the film. And that is, Satellite Shankar is shot in all real locations! So if a particular scene is set in Agra, then it was shot at real locations in Agra. The same goes for all other places mentioned like Salem, Pollachi, Cochin etc. This is fascinating because this means the film’s unit travelled throughout the length of the country from Kashmir to Tamil Nadu!

Director Irfan Kamal too has done a splendid job. It requires loads of conviction to pull off a story which, though has several plusses, is also utopian and full of cinematic liberties. Here’s a director who deserves to be celebrated. Then, Jitan Harmeet Singh is the cinematographer of the film who shot the film in a grand manner. All the locales look spectacular thanks to this talented lensman. Songs too deserve praise. The track named ‘Jai He’ deserves to be an anthem of the nation, just like ‘Jai Ho’ and ‘Chak De India’ and is bound to give you goosebumps!

The actors of the film do very well. Palomi Ghosh is a promising actress and she plays her role perfectly. South actress Megha Akash, who’ll be seen in Radhe next, is lovely. The rest of the supporting actors like Upendra Limaye, Pradeep Singh, Anurag Mishra, Anil K Rej, Asif Basra, Subrat Dutta, Sanjay Gurbaxani etc, too, give in their best. And last but not the least, Sooraj Pancholi delivers one of the greatest performances of recent times! You probably hate him because someone randomly alleged that he is involved in Disha Salian murder case and this unfounded rumour spread like wild fire. There’s no truth to it and he has not even been summoned by any authorities as he’s no way involved with the case. If you still hate him for no rhyme or reason, watching Satellite Shankar is sure to change your mind. The manner in which he has played this amazing character with panache proves that he’s one of the best actors around.

My heart pains to see so many regular moviegoers who have not even heard of Satellite Shankar. It’s no surprise, hence, that the film tanked horribly in cinemas. But now it’s out on Zee5 and I recommend you to go watch this modern-day classic immediately. At a time when there’s so much negativity in the world, watching this flick can spread a lot of positivity and cheer. It is entertaining, engaging and most importantly, it reaffirms the age-old adage: बुराई चाहे जीतनी भी फैल जाए, वह अच्छाई से एक-दो कदम पीछे ही रहेगी!

3 thoughts on “Celebrating 1st anniversary of Satellite Shankar, the modern-day CLASSIC which you probably missed”