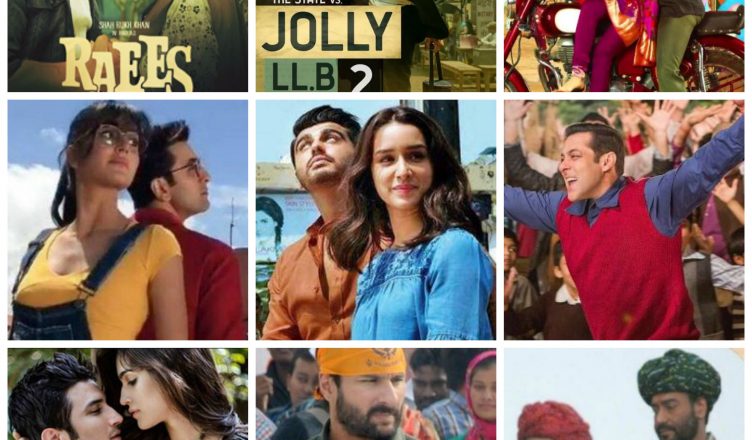 I have not added 2.0 and Baahubali 2 since these aren’t Bollywood films. Also I haven’t added those films that I have already seen like Haraamkhor A Death In The Gunj, Trapped and Lipstick Under My Burkha but these are definitely films to watch out for in 2017! Lastly, I doubt if Crack and Veere Di Wedding will make it in 2017 and hence, these films are not in the list

RAEES: Shah Rukh Khan is back in a massy, commercial avatar with Raees that deals with prohibition in Gujarat. From the trailers, it seems that the movie is laced with some great dialogues, dramatic confrontations and fine action scenes. SRK-Mahira Khan’s chemistry should be a treat and same goes for SRK-Nawazuddin Siddiqui’s dialoguebaazi!

JOLLY LLB 2: The first part was superb and the second part also looks fabulous and hard-hitting. Arshad Warsi is missed but Akshay Kumar seems to be in top form in this courtroom drama!

BEGUM JAAN: Vidya Balan gets another chance to consolidate her position with Begum Jaan, a remake of the Bengali film Rajkahini. Set during the Partition, it’s about a brothel owner who faces a predicament when Pakistan gets formed. This won’t be a usual Bhatt film and whenever that has happened (Citylights, Gangster, Awarapan), they have come up with something that is remembered for years

BADRINATH KI DULHANIA: Humpty Sharma Ki Dulhania was damn good and hence, there are lot of expectations from Badrinath Ki Dulhania. Thankfully, both Varun Dhawan and Alia Bhatt are retained and they are definitely one of the best jodis of Bollywood.

JAGGA JASOOS: There were lot of negative stories floating about this film. But the trailer has made a lot of viewers feel that this can turn out to be a great entertainer. It looks like a classy, international product. This can be a great family extravaganza that might set a benchmark!

NOOR: Sonakshi Sinha features in a lead role in this slice-of-life film adapted from Saba Imtiaz‘s novel Karachi, You’re Killing Me. That Sonakshi features in a prominent role is quite interesting since she’s ridiculed for not taking up lead roles. She sure has the talent and with Noor, she can prove that yet again, after power-packed performance in Akira.

ATITHII IIN LONDON: The first part was hilarious and touching and the same can be expected from Atithii Iin London too. Kartik Aaryan steps in Ajay Devgn’s shoes but Paresh Rawal is retained, and Supriya Pathak joins in the fun!

MERI PYAARI BINDU: Parineeti Chopra is FINALLY back after almost 2 ½ years with Meri Pyaari Bindu. To add to the fun, there’s Ayushmann Khurrana as her co-actor and the film is set in Kolkata!

HALF GIRLFRIEND: This was one of Chetan Bhagat’s finest novels and it’ll be interesting to see how it’s adapted on screen. Moreover, Mohit Suri is at the helm and hence one can expect some great songs.

TOILET – EK PREM KATHA: The film is based on a great idea, the need of the hour. It has Neeraj Pandey as the producer and his track record and also his collaborations with Akshay Kumar have been great till now. Dum Laga Ke Haisha’s Bhumi Pednekar is also a part of this special flick.

TUBELIGHT: Eid has become all the more special thanks to Salman Khan’s releases. This Eid, he’s back with Kabir Khan and has come up with Tubelight. From the stills, it looks an unusual Salman Khan entertainer and that has really upped the curiosity!

RAABTA: Sushant Singh Rajput for me is one of the finest actors of the new generation and hence, I am really excited to see him in Raabta, which is also Dinesh Vijan’s directorial debut. His chemistry with Kriti Sanon is expected to be crackling. It’s shot in Budapest, one of the most beautiful cities of Europe.

MUNNA MICHAEL: Tiger Shroff is a great performer and it’s a treat to see his films in single screens.  And that’s one of the big reasons why Munna Michael is highly awaited. Also, it will be interesting to see him sharing screen space with Nawazuddin Siddiqui since both belong to different kinds of cinema.

CHEF REMAKE: Chef was an amazing piece of cinema and its remake should also be fun. It’s directed by Raja Krishna Menon, who made Airlift. Saif Ali Khan is a great choice for this role

BAREILLY KI BARFI: Ashwiny Iyer Tiwari made viewers sit up and take notice of her with Nil Battey Sannata. What she must have ‘prepared’ with Bareilly Ki Barfi is something to look forward to. It’s set in small town North India, which is quite exciting to witness on screen. The star cast – Ayushmann Khurrana, Rajkummar Rao and Kriti Sanon – adds to the curiosity.

THE RING: Shah Rukh Khan reunites with Anushka Sharma and they collaborate with Imtiaz Ali. Surely, a film that is eagerly awaited!

BAADSHAHO: Ajay Devgn, Emraan Hashmi and Milan Luthria reunite after the highly memorable Once Upon A Time In Mumbaai for Baadshaho, supposedly based during Emergency. There’s also this cute Ileana DCruz in this multi-starrer.

SIMRAN: Hansal Mehta is back with Simran and this time there’s Kangana Ranaut as the leading lady and not Mehta’s lucky charm Rajkummar Rao. It’s based on a true story and has some intense, shocking scenes but as per the reports, it’s quite an entertaining flick.

GOLMAAL AGAIN: This is not a really favourite series of mine but this film interests me as it’s been a while since we have seen a Rohit Shetty madcap comic caper. And Parineeti Chopra joins the gang and she’ll surely bring the required madness to this film!

TUMHARI SULU: Vidya Balan features as a RJ who runs a semi-adult show in this slice-of-life film. The last time she played RJ, she rocked like anything. Let’s hope she manages to impress once again and get back in the top league with this one!

TIGER ZINDA HAI: Ek Tha Tiger had its minuses but was a great entertainer with tremendous repeat value. Hence, Tiger Zinda Hai can be expected to entertain and excite viewers. That Salman Khan and Katrina Kaif will come back together is also quite superb.

PADMAVATI: Sanjay Leela Bhansali will stun viewers hopefully once again with this magnum opus. Ranveer Singh features as the antagonist this time and that should be really fun. Deepika Padukone and Shahid Kapoor’s presence has already created tremendous curiosity.

FUKREY 2: Fukrey was a surprise sleeper hit of 2013. Richa Chadha was menacing as well as highly adorable. The boys’ gang too entertained a lot. Fukrey 2 hence should hence be a hilarious roller-coaster ride. It’s set in the Capital just like the first part and hence, the lovely Delhi flavour is retained in this one too!

PAD MAN: R Balki can work wonders when he attempts new, unusual stories (he faltered just once with Shamitabh). Pad Man seems to be another entertaining-moving film from this genius maker. It deals with a small-town resident who makes low cost sanitary pads. Twinkle Khanna has written the story and maybe, also the screenplay and this is something very exciting since we all know that she is a great writer! 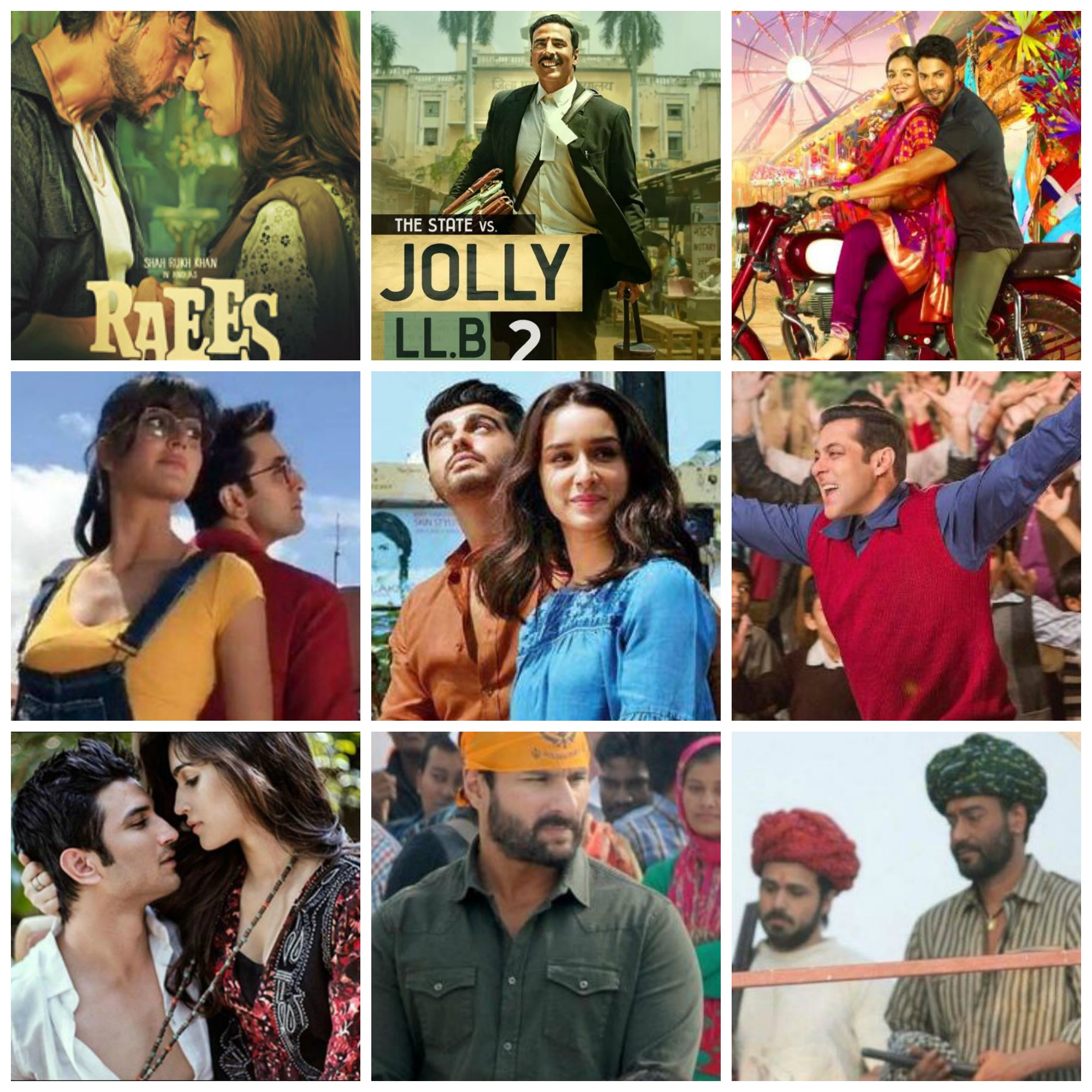