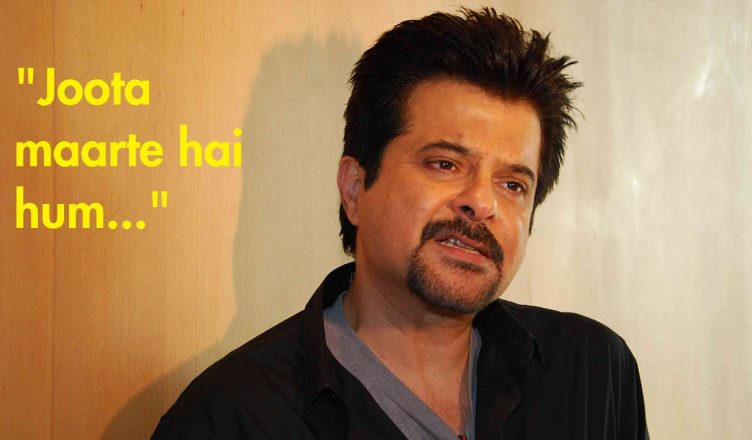 Anil Kapoor is a talented performer who has been known for making sensible statements. It’s rare that he has even landed himself in controversies due to his quotes. Hence, it was shocking to see the 59-year-old performer saying something silly and rather insensitive and that too about the touchy subject of depression. Anil Kapoor, in an interview to DNA on Saturday October 1, 2016 (for link, CLICK HERE), was asked if he’s sad now that season 2 of his TV show 24 is coming to an end. The actor gave the following reply to this question:

“There are three things that are not in my dictionary and have been banned from the Kapoor home – sadness, depression and boredom. When people feel sad, we give them a kick, when bored a slap and when depressed joota maarte hai hum. We don’t go to psychiatrists this way. In Indian families we are all there to give each other happiness and moral support”

At first, it was difficult to believe that the actor actually said it. Although the awareness of mental health is still very less in India, any average person will still know that depression is a condition that requires help from a qualified professional. Anvita Janardhanan, a Psychologist, explains, “Clinical depression is more than just sadness. A person battling depression would feel tired all the time, would eat and sleep very little or too much, feel irritated, helpless, hopeless or guilty, with little interest in the activities that he or she previously enjoyed for more than two weeks. He or she would find it difficult or impossible to focus on or complete day to day tasks (CLICK HERE).” There have been instances when not taking timely help in depression cases has led to some really bad consequences for a lot of affected people. Open any newspaper of any day and there will surely be one news report of a person ending his/her life after losing his battle to depression.

Yet, that Mr Anil Kapoor didn’t even think twice before making such statements is really a cause for concern. Depression requires counseling and medication. And yes, support from family members as well. This doesn’t mean the patient is supposed to be assaulted with shoes. In fact, his statement indicates that he thinks of depression as a bad habit that can be ‘cured’ by mocking the patient so that he comes out of it. It is so wrong of him to hold such a belief and that it comes from a man who is perceived to be responsible and humble makes it all the more shocking! Also, people are not required to be kicked when they are sad. Yes, they can be pushed (gently) to come out of it but a term like ‘kick’ has negative connotations.

Says Dr Devendra Save, Senior Psychiatrist and Joint Director, Mumbai Psychiatry Clinics, “There’s a difference between feeling depressed temporarily and Clinical Depression. In Depression, certain chemicals in the brain like serotonin, dopamine and norepinephrine that are regulate mood, motivation, pleasure, energy, sleep get affected.” And it is obvious that hitting the depressed person with shoes will not alter the serotonin transmission. Dr Save adds, “People who have the expertise would be in the best position to decide whether it is something that needs a hug or a kick or a change of place, or something more significant than that.”

Here’s wishing Anil Kapoor reads this article and understands his folly. What he said is not just true and it’s not even funny and hence it can’t be even passed off as a joke. Here’s also wishing that with the World Mental Health Day just a few days away (it falls on October 10), he reads up about various aspects of it and understands the picture better so that he doesn’t make such careless statements ever again!