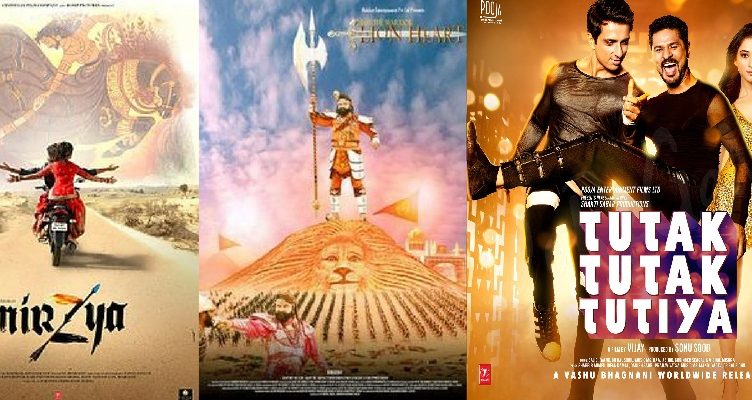 WILL MIRZYA MANAGE TO MAKE A MARK?

This Friday will see the release of 3 Hindi films, out of which one film – Mirzya – stands out and is very crucial. It marks the debut of Anil Kapoor’s son Harshvardhan and Tanvi Azmi’s niece Saiyami Kher. It is directed by Rakeysh Omprakash Mehra, who has carved a niche for himself thanks to films like Rang De Basanti and Bhaag Milkha Bhaag. Gulzar has penned the screenplay and it is after 17 years that he has written a film (he did write the small segment – Gubbare – in Dus Kahaniyaan in 2007). The movie is about the story of Mirza Sahibaan but there’s a modern story going on simultaneously as well. Perhaps it is similar to what Mehra attempted in Rang De Basanti. Songs have caught attention but have not become chartbusters. It can happen if the film makes a mark. Sadly, it has a lot of challenges to overcome. Firstly, the cost is very high – too high for a film starring newcomers. Also, the trailer hasn’t been unanimously praised although everyone is curious about the film. The plus point is that the folklore of Mirza Sahibaan is extremely popular in North India. Hence, it can take a big opening out there. Yet, the opening overall will be average to decent. The real challenge would be to ensure that audiences like the film and only then will the film manage to have a strong weekend and eventually recover its huge cost. With no film for the next 3 weeks, Mirzya can emerge as a box office success if word of mouth is positive. But if it is not, then it can turn out to be a huge debacle.

The other 2 films releasing tomorrow don’t have much of a chance sadly. Tutak Tutak Tutiya, earlier called Two In One, is the first production of Sonu Sood. Sonu himself stars in the movie alongwith Prabhu Dheva and Tamannaah Bhatia. The trailer is funny and songs have been getting lot of views. But the humour is not of ROFL-variety. Hence, the buzz is very limited. It is a trilingual film and if it fails in Hindi but succeeds in Telegu or Tamil or both, then it still be worth it.

The third film releasing tomorrow is MSG The Warrior – Lion Heart. It is the third part of the MSG franchise starring Gurmeet Ram Rahim Singh Insan. This installment is made on an epic scale as it also involves past life, aliens etc. And yes, just like the first 2 parts, it looks damn funny! Interestingly, the first 2 parts were box office disasters. There were reports of Gurmeet Ram Rahim Singh Insan’s followers themselves doing block bookings and watching the film themselves. In fact, according to them, MSG part 2 has collected more than 100 crore and ran in theatres for more than 50 weeks! It won’t be a surprise if part 3 also manages to put up ‘House Full’ boards outside multiplexes!

WHICH FILM WOULD YOU LIKE TO SEE? DO LET ME KNOW!