Cricket is like a religion in India but it is surprising that there have hardly been any biopic of any famous cricket personality made in Bollywood. What’s even surprising that 2016 itself has seen the release of 2 such biopics. One was Azhar which was a disappointing fare. But the second one, M S Dhoni – The Untold Story, is not. In fact, it is one of the best films of 2016 and probably in recent times!

The story of the movie: Mahendra Singh Dhoni (Sushant Singh Rajput) is based in Ranchi and is a pro when it comes to cricket. However, his father Pan Singh (Anupam Kher) is apprehensive and wants Mahendra or Mahi as he’s fondly called to take up a stable job. Circumstances compel Mahi to take up the job of TC at Kharagpur, West Bengal. As expected, he’s hardly happy with his job. He yearns to get back to the cricket ground and improve his game.

M S Dhoni – The Untold Story begins on a rocking note. Dhoni’s entry is terrific and it’s praiseworthy how the film goes on a high from the first scene itself. Thankfully, the excitement doesn’t die down when the flashback commences. In fact, there’s nothing in the first half that’s not great. Each and every sequence engrosses viewers thoroughly. One of the most striking points in the film is when Dhoni makes an overnight journey to reach Dum Dum airport. The sequence of Dhoni’s TC stint is also damn good. One can feel the pain that Dhoni goes through and how a ‘stable job’ is not the answer to everything in life. The intermission point is a killer! The excitement continues in the second half but it’s here that the film begins to fall a bit. The romantic portions are nice no doubt but after a point it gets too much. Also, the film just touches upon Dhoni’s cricketing career after he gets into the big league. The movie doesn’t throw any light on Dhoni’s association with his team mates, locker room conversations etc. Even these could have been a part of the ‘Untold’ aspect of the film after all. Hence, the movie gives a something-is-missing feeling in the end. On the positive side, the climax is super-exciting and that helps.

Performance wise, it is obvious that it’s Sushant Singh Rajput who takes the cake. This is not just his greatest performance; this is a milestone in his career. M S Dhoni – The Untold Story is to Sushant Singh Rajput what Bhaag Milkha Bhaag is to Farhan Akhtar and Bajirao Mastani is to Ranveer Singh. It is praiseworthy how Sushant gets the mannerism of Dhoni right, even his helicopter shot! He shows off the frustration in the TC scenes so well. And he’s so cool in the romantic scenes too. In each and every aspect, he has succeeded. Sushant has always impressed but with M S Dhoni – The Untold Story, he has entered into a different league altogether!

Anupam Kher is dependable as always and not even for a moment does he go overboard. Bhumika Chawla (Jayanti, Dhoni’s sister) is lovely and plays her part very well. Disha Patani (Priyanka) is very impressive. She has an amazing smile and a great screen presence and delivers a very fine performance. Kiara Advani (Sakshi) is equally great. In fact, Disha’s portions were so good that it was a challenge for Kiara to ensure audiences love her track as well. But she manages to impress a lot. Both actresses are superb and deserve to get lot of roles (lengthier ones that too)! Rajesh Sharma (Dhoni’s school coach) is superb as always. He contributes to laughter quotient as well. He also moves viewers as he plays an instrumental role in recognizing the talent in Dhoni. Kumud Mishra is an expert when it comes to playing such roles and he does a good job. Herry Tangri (Yuvraj Singh) leaves a solid impact with just few minutes of screen time. The actors playing Ganguly, Dhoni’s Sardar friend, Satyaprakash are damn good.

Amaal Mallik’s music is quite okay and hardly memorable. Songs thankfully don’t hamper the pace of the film. Sanjoy Chowdhury’s background score is dramatic and makes a nice impact. Sudheer Palsane’s cinematography is award-worthy. The cricket scenes and even the other ones are very well shot. Locations are straight out of life and some of the scenes are shot in real locations that gives the film a nice touch. VFX deserves the highest praise. The film shows actual footage of matches with Sushant’s face masked on Dhoni. It’s done beautifully! Neeraj Pandey and Dilip Jha’s story is good and screenplay is even better. It could have added more details about Dhoni’s life but then they would have to do away with the love story which is also important. Also, one wonders why Dhoni is shown to be commitment phobic at places. Neeraj Pandey’s dialogues are simple and effective. His direction as always is neat and impactful. He could have done better at places but no complaints since this is not an easy film to make. He has no reference point (as aforementioned, there has been no cricket biopic in Bollywood). He followed few rules, he broke some but what emerged is something to cherish and that’s what matters. Hats off!

On the whole, M S Dhoni – The Untold Story scores a sixer. Despite the excessive length (190 minutes) and some loose ends in the second half, it’s a film that deserves a watch for it’s engaging narrative and of course for Sushant Singh Rajput who rocks big time. The first half is outstanding and even the romantic portions are enjoyable. The technical team has done a splendid job, especially the VFX guys – the way Sushant’s face is masked on Dhoni is brilliantly done. At the box office, the film is a winner, just like Dhoni! 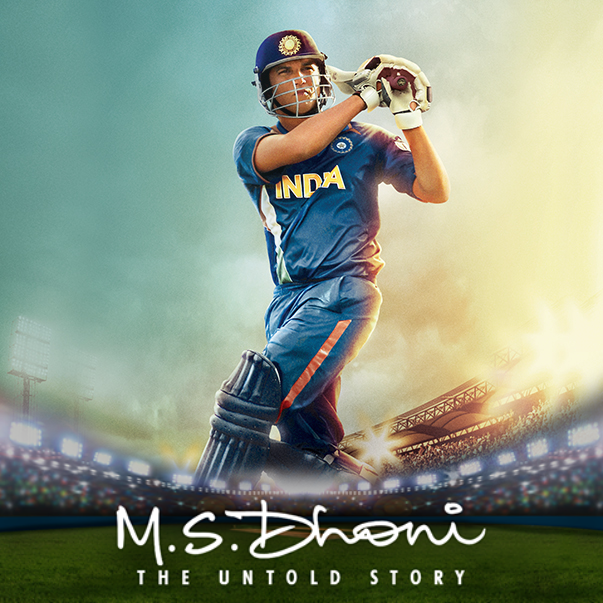