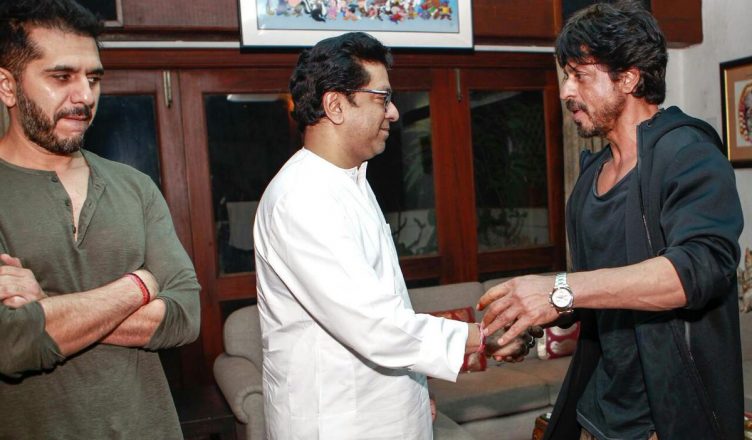 I have always been your hugest fan. I was dejected when Dilwale and Fan didn’t meet the desired expectations. I whole heartedly stood by you when your comments over intolerance were criticized. I read each and every interview of yours with rapt attention because I know that it’ll not just entertain me, but also enlighten me!

I was so happy when I saw the first day first show of Dear Zindagi as the movie turned out to be a great fare. My joy knew no bounds when the trailer of your upcoming film Raees was unveiled! It is terrific to say the least! However, just days later, I learned about your meeting with Raj Thackeray at his residence. The meeting was not just another meet between two public figures. It was held to pave the peaceful release of Raees. Just less than 2 months ago, Raj Thackeray had harassed Karan Johar as his Diwali release Ae Dil Hai Mushkil starred Pakistani actor Fawad Khan and that too in a 10 minute role. Finally, Chief Minister Devendra Fadnavis acted as a kind of a mediator and allowed the release of the film. There was a price to it – Rs 5 crore. You on the other hand had a bigger problem since Mahira Khan, also from Pakistan, is the leading lady of the film. Also, you unfortunately are seen as someone who has a soft corner for Pakistan – some people still believe that you did some charity show for Pakistan flood victims, courtesy Shiv Sena. And not to forget, you are a Khan. Hence, perhaps, you decided to solve the problem much in advance so as not to get harassed a la KJo. Also, you skipped the mediator and met Raj Thackeray directly. The idea worked and Raj Thackeray ‘allowed’ the peaceful release of the film.

Did you just realize that you have set a dangerous precedent? Tomorrow, any party or a group of people can stall the release of any film on any grounds, mostly patriotic, since it stirs up feelings and they begin to look at the ‘ban’ of the film as a justified move. Is it so difficult to fight Thackeray and their ilk? You are one of the most influential people of the world, forget the country. Couldn’t you have taken a stand? Yes, some people would not have supported it but they anyways hate you and would never praise you. But there’s a vast section of people who would have stood by you like a rock.

But on second thoughts, I understand why you compromised. What’s the guarantee that rebelling against Raj Thackeray would have worked? The last time he created problems, for Karan Johar, the Chief Minister of our state, instead of arresting Thackeray for threat and teaching him a lesson, turned into a ‘mandavli bhai’ and helped in settling the matter. Even during My Name Is Khan’s release, when Shiv Sena created problems, the government did help you in releasing the film but didn’t touch the influential officials of the Sena. Whether it’s BJP or the Congress government ruling the state, they have always been spineless when it comes to taking action against the Thackerays. In such a situation, what choice did you have? If the MNS had created problems, it would have affected Raees collections in Mumbai and all the places in Maharashtra where they have an influence. The police surely would have taken swift action and arrested the troublemakers (only to release them in a few hours/weeks as is always been the norm), but the damage would have been done. The fear would have been spread. Moviegoers obviously would have stayed away. By the time the situation would have normalized, the crucial first weekend would have passed and collections would have been affected. Not just you and co-producers Excel Entertainment would have suffered but even the distributors and exhibitors would have borne the brunt. Theatres would have been vandalized. After all this, if the government would have arrested Raj Thackeray and extracted compensation from him, the risk would still make sense. But sadly, as we all know, that never happens. It’s the people associated with the film who would have suffered.

Hence, although I am angry with your actions, I feel what you did was in the best interests of the movie. I just hope that maybe significant people of Bollywood like you, Aamir Khan, Mahesh Bhatt, Salman Khan etc can come together and decide on what should be done in future if such a situation arises. You guys collectively can pressure the government so that no Raj Thackeray later on dares to play petty politics by threating any Bollywood fraternity member.

I hope, if this letter reaches to you, it is taken in the right spirit.