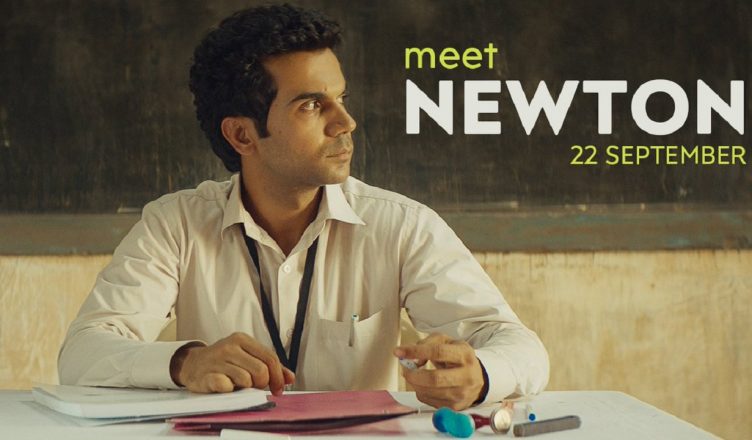 For most of us, going to vote in an election is a fairly simple process. We leave from our house, go to the nearest polling booth, verify our identity, get inked and then press the button against our favourite candidate. Most people would have never experienced any untoward incident while they perform this duty as a citizen. But there are many districts in India where it’s an achievement to conduct elections on the part of the Election Commission of India and to vote on the part of the citizens. It was surprising that all this while, nobody made a film on this exciting and intriguing topic. Thankfully, Amit Masurkar took up the challenge and the result is Newton. The film is very niche but it turns out to be one of the best films in recent times!

The story of the movie: Newton Kumar (Rajkummar Rao) is a very honest government official for whom his work and duty is sacred. He resides in Chhattisgarh and he’s kept in the reserve category during the election season. He voluntarily agrees to go to the Maoist infected jungles to conduct voting. The area where he’s given the charge hasn’t seen voting happen in a long time. There are only 76 voters in the constituency and yet, Newton insists that voting be held as per the rule. The officer entrusted with the security of Newton and his team – Lokenath (Raghubir Yadav), Shambhu (Mukesh Prajapati) and the local resident Malko (Anjali Patil) – is Aatma Singh (Pankaj Tripathi). He understands the futility of garnering votes in this region and has his own way of dealing with things. However, the righteous Newton refuses to pay heed to Aatma’s suggestions and insists that they go to the polling booth on the D-Day.

Newton is just 105 minutes long and grips and impresses from the first sequence itself. Newton’s entry is very unconventional but it’s lovely the way his honesty is explained to the viewers. Of course, the fun begins when Newton reaches the tension-filled jungles. The film gets even better when Aatma Singh enters the narrative. The constant tu-tu main-main between Newton and Aatma at various junctures makes for a great watch. The climax is very unpredictable and the film ends on a brilliant note. What’s noteworthy is that the film not just entertains and gives an overview of the whole problem. It actually presents the problem the way it is where not just Naxalites but even the authorities are to blame for making the lives of the poor villagers hell. And the whole thing is handled very well and that’s where the film scores big time!

Sadly, the film isn’t devoid of glitches. 15 minutes before the interval, the film comes to a standstill with nothing much happening. At one point, it does test one’s patience. Also, the sequence where the villagers come and vote is not that great or interesting. It is difficult to pinpoint what goes wrong here but somehow, it could have been better. Lastly, the very final sequence involving Aatma Singh makes no sense and gives a déjà vu of The Hurt Locker.

Performance wise, Rajkummar Rao as expected rocks the show. What’s praiseworthy is how he ensures that each of his performance looks different from the other. Before Newton, he played a small-town guy in two other films which released very recently – Behen Hogi Teri and Bareilly Ki Barfi. But not even once do these characters overlap even for a nano second! One gets stunned as he plays the righteous Newton and the lengths he goes to perform his duty. Watch out for him in the final sequence – he’s outstanding! There’s no doubt that Rajkummar Rao is one of the greatest actors of Indian Cinema ever! Pankaj Tripathi is a big surprise of the film. Yes, it was clear from the promos that he has a crucial role but what nobody would have predicted that he’s like the second lead of the film. Newton in fact can be called as a two hero film! The ease with which he performs, mouths the dialogues and allows his expressions to do the talking is seen to be believed! Raghubir Yadav sadly gets limited scope as Rajkummar and Pankaj steal the show. But he too manages to leave a mark and raise laughs. Mukesh Prajpati gets even lesser scope but is fine nevertheless. Anjali Patil as always delivers a fine performance. Her character and her point of view add a lot to the narrative. Sanjay Mishra (Election officer) dominates the first 15 minutes quite well. Needless to say, he’s too good. The Peepli Live actor Omkar Das Manikpuri also features in the film and it’s sad to see him doing such inconsequential roles.

There’s just one song in the film – Panchi Ud Gaya – and it is not memorable at all. Naren Chandavarkar and Benedict Taylor’s background score compensates for it and it’s very unique and light-hearted. Swapnil S Sonawane’s cinematography is simple and neat. Same goes for Shweta Venkat Mathew’s editing. Amit Masurkar’s story is brilliant and rare. Mayank Tewari and Amit Masurkar’s screenplay is also very effective. Since there’s no precedent for Newton, nobody knows what to expect next and that’s a big victory of this film. Mayank Tewari and Amit Masurkar’s dialogues are funny, well-worded and sharp. Amit Masurkar’s direction is lovely and he adopts a fine pace for most part of the film. He should have quickened the pace in the middle but overall, he impresses as he has a good hold over the subject and treats it sensitively.

Some of the best scenes:
1. The first scene (establishes the danger of the forest very well)
2. All scenes of Sanjay Mishra
3. Newton meets a girl for marriage and the scene thereafter
4. Newton, Lokenath and Shambhu on their way to the camp in the jeep
5. Newton meets Aatma Singh for the first time
6. Newton insists that Malko be a part of their entourage
7. Lokenath talks about zombies and Ravana (hilarious)
8. Villagers being forced to come for voting
9. The last 15-20 minutes

On the whole, Newton is a hard-hitting, unconventional entertainer that talks about the much-ignored issue in films – Naxalism and elections and what happens when both collide. Rather than taking an overview of the subject, the film actually goes deep and raises several questions about the way the authorities are handling the problems. It is bound to be debated and give rise to different versions of who was right in the film and who wasn’t. But ultimately, audiences look for entertainment and the film does give that, though it is also quite unconventional. As a result, the film is going to appeal to only a small section of audiences. Box office wise, it’s bound to fail but here’s hoping it gets its audience later on video streaming platforms!