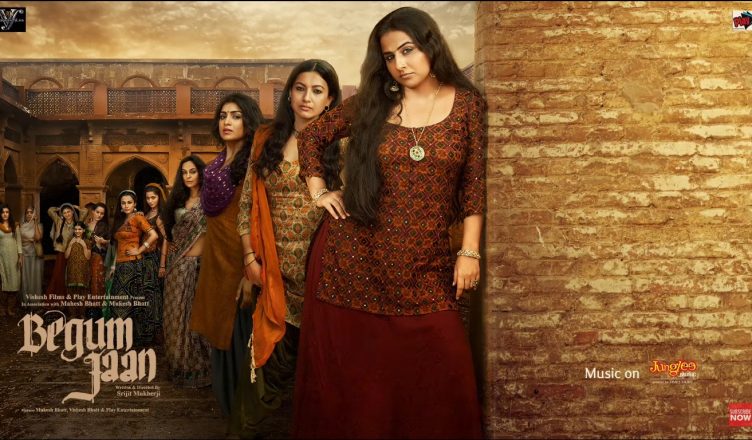 During Begum Jaan’s promotions, director Srijit Mukherji made a very valid point: “When you read the works of Saadat Hasan Manto and Ismat Chughtai, you realize…the marginalised section among the commoners was women and among the women, the marginalised were the prostitutes. In any society, the bottommost rung is the most exploited. And that’s where planting the seeds of revolt would make narrative sense.” There are several stories of the Partition but Begum Jaan is unlike anything we have heard about. A prostitute never enjoys the respect even during normal times but when it’s the Partition, when there’s bloodbath going on everywhere, one can well imagine what must be their state. Begum Jaan tells the story of a prostitute and her juniors and how they stand up when their own little ‘kingdom’ is threatened by external forces. The film has a great message and is riddled with some powerful scenes which makes it worth watching despite the loose ends.

The story of the movie: The year is 1947. India has just got independence but it means nothing for Begum Jaan (Vidya Balan), who runs a brothel in the outskirts of two villages in Punjab. Life is going fine when one day, two government officers (Ashish Vidyarthi and Rajit Kapur) arrive at her residence and order her to evict. Reason: the house is positioned at the center of the border line created by Cyril Radcliffe. Begum is not the one who can be intimidated. She refuses to leave along with her fellow prostitutes. She is confident that a solution can be found.

The world of Begum Jaan is introduced at the beginning and in no time, one gets sucked into it. Begum’s idea about men, independence and hypocrisy in society is very interesting to know. She might seem as someone who’s strong and doesn’t need anyone but she too submits herself at a man who dominates her. But she truly comes out on her own when she breaks through that shackle too. The rest of the characters are also interesting with their back stories. But sadly, there are too many of them and after the film ends, one might not be able to recall all of them. Besides, while some scenes take the film to a high, there are sequences which are strictly okay. Amma narrating tales of powerful women looks out of place initially though later it makes sense. But one wishes if so many such sequences were not there in the film. Ilias-Harshvardhan’s tu-tu main-main gets repetitive after a point. Also, the location, although beautiful, doesn’t look an inch like Punjab, where the film is set. Moreover, it’s bewildering why Begum and her girls are playing Holi in the month of August.

But on the positive side, there are some hard-hitting scenes that really engage the viewer. The climax is quite shocking and disturbing and makes the correct impact. And moreover, the film is linked to 2017 as well and this portion leaves a very strong mark.

Begum Jaan features lot of talented actors and memorable characters but Vidya Balan shines the most! One totally forgets all her past performances – she goes into a different territory altogether like never before. It’s unfortunate that she hasn’t got commercial success in a long time. Begum Jaan too might not turn into a hit but at least this performance will ensure that she gets more roles hopefully! Pallavi Sharda (Gulabo) leaves a huge mark out of all Begum Jaan’s subordinates. She has a crucial track in the film and does very good. Her desi look is ravishing! Gauahar Khan (Rubina) gives a strong and heartfelt performance. She stands out in her scene with Surjeet near the river. Ila Arun (Amma) is strictly okay. Mishti (Shabnam) doesn’t say a word but expresses a lot through her expressions and eye. Great work! Raviza Chauhan (Lata), Priyanka Setia (Jameela) and Gracy Goswami (Laadli) are nice but leave a huge impact towards the end. Ridheema Tiwari (Amba), Flora Saini (Maina) and Poonam Rajput (Maina) don’t get much scope. Pitobash Tripathy (Surjeet) does a fine job and it’s good to see him after a long time. Sumeet Nijhawan (Salim) is to Begum Jaan what Om Puri was to Mirch Masala. His character is kick-ass and he’ll be loved! Ashish Vidyarthi (Harshvardhan) gives a fine performance but his break down scene looks unconvincing. Rajit Kapoor (Ilias) on the other hand is quite good. Vivek Mushran (Master) is very impressive. Chunky Pandey (Kabir) is terrific and it’s unbelievable that this actor, known for comic roles, can play the villain so well. Rajesh Sharma (Inspector Shyam) is as usual great. Naseeruddin Shah (Raja) is decent in the cameo.

Anu Malik’s music is soulful. Pyaar Mein Tohre is the best song of the lot and surprisingly, more than Asha Bhosle’s version, it’s Kavita Seth’s version that touches more. Holi Khelein is also a great track and Shreya Ghoshal’s voice works like magic! Background score is exhilarating. Gopi Bhagat’s cinematography is too good. The bird’s eye view scenes and the interiors of the brothel are well captured. However, showing half of Rajit Kapur and Ashish Vidyarthi’s faces when they are discussing Parition doesn’t work in all the scenes. Srijit Mukherji’s story is brilliant and unique, at least in the film space. Screenplay works for most of the part but there are places where it could have been tighter. There are far too many characters and it’s difficult to remember all of them. Dialogues are sharp. Srijit’s direction is fine but he could have kept the length at check. But a great effort overall and it’s praiseworthy how he romanticizes the idea of a brothel in his own way. The whole setting reminds one of Harisvanshrai Bachchan’s Madhushala too. A fine effort and hope to see more of him in Bollywood!

Some of the best scenes:
1. The 2017 scene (powerful!)
2. Begum Jaan meets Shabnam for the first time
3. All important scenes of Surjeet
4. Begum Jaan shows Ilias and Harshvardhan their place and intermission point
5. All scenes of the Raja
6. Master’s conversation with Begum Jaan in the bedroom
7. Begum Jaan and Gulabo at midnight
8. The brothel members are enjoying the mutton served for lunch
9. The climax

On the whole, Begum Jaan delivers a powerful message and is laced with some bravura performances. Vidya Balan obviously rocks the most – this is unlike what the versatile actress has done before in her glorious career! Story is quite impressive and unlike any other Partition tale told on celluloid before. The climax is a shocker. If the glaring loose ends were taken care of (and sadly there are quite a lot of them), Begum Jaan would have been a classic! Thankfully, the plusses outweigh the minuses and hence Begum Jaan is surely a film worth watching!

P.S.: Don’t miss the beginning at any cost!