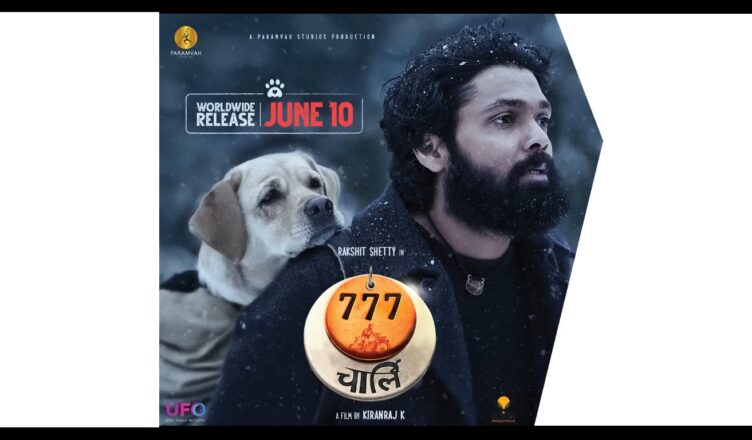 While Hollywood has made several films on dogs, in Indian cinema, only a handful of films have revolved around man’s best friend. 777 Charlie attempts to fill this void. It’s a Kannada film, which has been dubbed in Hindi and attempts to tell a beautiful story of a bond between a man and his dog. Shot in difficult conditions, 777 Charlie turns out to be one of the greatest films in recent times, despite some minuses.

The story of the movie: A Labrador escapes from the clutches of a breeder. She reaches Satara and starts roaming around Chinmaya Society. Dharma (Rakshit Shetty) lives in this society. He’s been an orphan since he was a kid. He works in a factory and doesn’t like to mingle with his colleagues or his neighbours. Once, an event is held at Chinmaya Society at night and it features an orchestra performing songs at a loud volume. The dog is disturbed because of the noise, and so is Dharma. He creates a ruckus and attacks the orchestra organizers. The dog feels relieved and she notices that it was Dharma who freed him from the agony of loud noise. The dog then starts roaming around Dharma’s house and she even starts following him. Dharma avoids her. However, slowly, both come close and the dog, later named Charlie, changes Dharma’s life for the better.

777 Charlie starts on a lovely note, showing Charlie escaping and reaching Satara. The shot of the waste paper on top of Charlie’s head is cute. Also cute is when Charlie sees Dharma and realizes that he’s her master. The track of Charlie creating havoc in Dharma’s life is sure to make one smile. Charlie being taken away is moving, and so is the interval block. Post-interval, the film goes on a different track as the road trip journey begins. The film dips here at places and picks up when Dharma meets a fellow dog lover. The snow episode is very moving. The film ends on a fine note.

Speaking of performances, Charlie deserves the first mention. 4 dogs have acted in the film and the one that performed for 80% of the scene is a superb actor! See it to believe it! Special mention also goes to Pramod B C, the dog trainer, for doing his work flawlessly. Rakshit Shetty delivers a smashing performance. The way he has gone into the skin of his character is seen to be believed. It’s praiseworthy that he dubbed for the Hindi version too. He’s a fine talent and here’s hoping he’s able to make a mark in Bollywood, starting with 777 Charlie. Sangeetha Sringeri (Devika) has a supporting role and lends able support. Raj B Shetty (Vet) is adorable. Sharvari V (Adrika) is cute. Danish Sait (Karshan Roy), Bobby Simha and the actors playing Uttam and Krupa are fine.

Nobin Paul‘s music is not memorable but the songs are well inserted. Nobin Paul‘s background score is far better and impactful. Arvind S Kashyap‘s cinematography is terrific. The breathtaking locales of Kashmir are shot exceptionally. Ullas Hydoor‘s production design is appealing. Pragathi Rishab Shetty‘s costumes are realistic. Vikam Mor‘s stunts are fine. Pratheek Shetty‘s editing could have been better as the film is too long.

Kiranraj K‘s story is beautiful and very touching. Kiranraj K‘s screenplay is peppered with some very funny and moving scenes. The film is in the same zone as Marley & Me, Hachi: A Dog’s Tale etc. But one is not reminded of these films at all as the story is different. Moreover, the road trip part and also the protagonist’s characterization and how he warms up to the dog is novel. However, there are far too many episodes in the script. Sanjay Upadhyay‘s dialogues are conversational. A few one-liners are sharp.

Kiranraj K‘s direction is outstanding. This is not an easy film to direct. Firstly, the dog is the central character and getting the animal to act is of utmost challenge. On top of it, the film moves from Satara to Rajasthan to Shimla to Kashmir. This is an ambitious film and yet, the director has pulled it off very well. He kept the execution simple; hence, the film appeals to all sections of the audiences. On the flipside, the film is lengthy, with a runtime of 2 hours 46 minutes. The Ludhiana dog championship track is lovely but doesn’t seem connected to the principal track. Ideally, the makers should have removed this part for a better impact.

On the whole, 777 Charlie is a lovely tale that is sure to make you smile and laugh and make your eyes moist. It’s a clean entertainer, meant for families and kids. If you are a dog lover or if you have pets, there’s no way you should miss this film. It has got a very limited release in Hindi. The awareness is minimal and here’s hoping it manages to grow gradually.