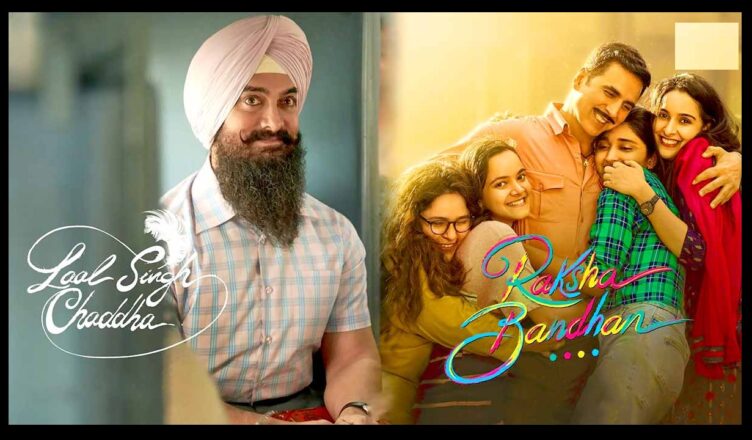 THE BIGGEST CLASH OF 2022 IS TO HAPPEN TOMORROW

The stage is set for the biggest box office clash so far this year. Laal Singh Chaddha and RakshaBandhan will arrive in cinemas tomorrow, August 11, and the excitement is palpable. This is because both films have the potential to be huge hits.

Laal Singh Chaddha stars Aamir Khan and he’s back to theatres after nearly 4 years. It’s an official remake of the Hollywood classic Forrest Gump, and also stars Kareena Kapoor, Mona Singh and NagaChaitanya. Forrest Gump is an episodic saga of a man who lives through some of the important events in American history. Actor Atul Kulkarni has written the adaptation and he has Indianized it well, going by trailer. As per reports, he has incorporated important episodes of Indian history like Emergency, 1983 Cricket World Cup, Operation Blue Star, the Rath Yatra, the 1999 Kargil War, etc. One of the most fascinating aspects of Forrest Gump is when the protagonist starts running across the length and breadth of the USA. In the remake, Laal Singh Chaddha is shown to be doing the same across India and it seems to have been picturized beautifully.

The film faces some issues though. It doesn’t seem to be a very mass-friendly film. And for a film to do blockbuster business, it needs to appeal to the common man. Whether Laal Singh Chaddha does so remains to be seen. Secondly, the buzz is limited. Thirdly, there’s a lot of negativity online although it won’t matter if public reports are positive. The negativity is mainly because a section of netizens are calling for its boycott like they have been doing so for most Hindi films after the demise of Sushant Singh Rajput. To justify their boycott campaign, they are arguing that Aamir had hurt religious sentiments during PK and in 2015, he had claimed that his then-wife Kiran Rao wanted to leave India due to rising intolerance. After these two episodes, Aamir Khan released three films – Dangal, Secret Superstar and Thugs Of Hindostan. None of these films was ‘boycotted’ and no sentiments were hurt then. Hence, it’s really amusing that suddenly the ‘boycott gang’ woke up now and are trying to peddle the narrative that the true, patriotic Indians won’t watch the film! It’s also been noticed that those who call for a boycott of films are the ones who usually don’t watch movies in cinemas. Hence, it’s absolutely silly that these should be taken seriously.

At a media interaction, Aamir Khan was asked about the ‘Boycott Laal Singh Chaddha’ campaign and he replied, “I feel sad about it. Also, I feel sad that some of the people who are saying this, in their heart, they believe that I am someone who doesn’t like India. In their hearts they believe (so), but it is untrue. It is rather unfortunate that some people feel that way. That’s not the case…Please don’t boycott my film. Please watch my film.” Interestingly, the buzz for the film increased manifold after this statement came out.

The other release of the week is Raksha Bandhan. It stars Akshay Kumar and Bhumi Pednekar and is directed by Aanand L Rai. It’s a story of a brother and his four sisters. The biggest plus of this film is that it looks very rooted and reminds one of the family films that were made in the past. Such films can appeal to a wide range of audiences, especially in mass centres. Songs are also lovely and can pick up after the film.

Family films usually are quite lengthy. Raksha Bandhan, meanwhile, has a runtime of just 110 minutes! Many are happy although a few industry people and exhibitors fear that viewers should not feel cheated by the short duration as they are not used to watching family films that are less than 2 hours. The buzz is also limited.

Raksha Bandhan releases on the day of Raksha Bandhan. Both films will enjoy a five-day weekend as Monday, August 15, is Independence Day. August 16 is Parsi New Year, which is a mini holiday of sorts. Then there’s the Janmashtami holiday on Friday, August 19. As a result, Laal Singh Chaddha and Raksha Bandhan can collect a huge moolah at the box office, provided the content clicks.

As of now, the advance of Laal Singh Chaddha is fair, though not extraordinary. Hence, the film can open at around Rs. 14-15 crores. It can grow more if people venture out in the evenings. And since times are unpredictable, one should be prepared if the opening is in the Rs. 11-12 crores range. If the film gets thumbs up from the public, it will further grow on Saturday and Sunday and can amass Rs. 30 crores on Independence Day. If the word of mouth is negative, the film will fall from Friday.

Raksha Bandhan’s opening will be in the range of Rs. 8 crores and hopefully, will touch the Rs. 10 crores mark. Since it’s a clean family film, its positive word of mouth will translate into healthy box office figures. Rs. 100 crore+ lifetime is also a possibility.