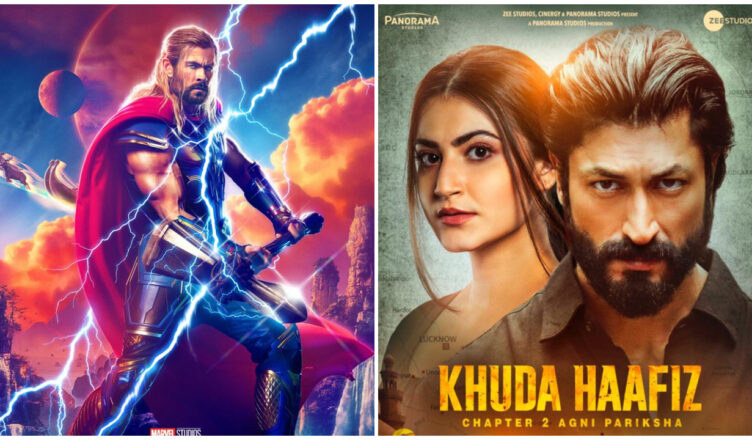 WILL THOR: LOVE AND THUNDER BE ABLE TO CROSS THE BUSINESS OF DOCTOR STRANGE IN THE MULTIVERSE OF MADNESS?

The Marvel Cinematic Universe has become a force to reckon with. Almost all of their films do huge business everywhere, including in India. Spider-Man: No Way Home collected more than Rs. 200 crores while Doctor Strange In The Multiverse Of Madness ended up doing business of around Rs. 130 crores. As a result, a lot is expected from Thor: Love And Thunder, which releases tomorrow, Thursday, July 7.

Thor: Love And Thunder stars Chris Hemsworth and Christian Bale and brings back Natalie Portman. The popular actor-filmmaker, Taika Waititi, has helmed the film. The trailer is quite entertaining. Thor is a fun character, unlike Doctor Strange. Also, Natalie Portman turning into Mighty Thor in this film will add to the madness and viewers are curious to see how it plays out.

Thor: Love And Thunder’s advance booking was thrown open a few weeks before after a similar experiment succeeded big time for Doctor Strange In The Multiverse Of Madness. The shows begin from 12:00 am and many such shows held at midnight or early in the morning, at 4:00 am or 5:00 am, are already sold out or fast filling. Interestingly, the shows at the usual timings are not even 20% full. This contrast has happened because the fans fill up the post midnight and early morning shows as they can’t wait to see the film. The section of the audience, who’s not desperate to see it, will obviously see it later in the weekend and not take an off from work to watch it on a Thursday.

Nevertheless, the trade is a bit taken aback as in the case of Doctor Strange In The Multiverse Of Madness, fans, as well as non-fans, had thronged cinema halls in hordes from day 1. As a result, it ended up having an opening of Rs. 28.75 crores. As per the advance trends till Wednesday morning, it looks like Thor: Love And Thunder will have a double digit opening. But the day 1’s collections might not cross the Rs. 20 crores mark. In case the film gets terrific word of mouth and viewers decide to go for it in large numbers from 4:00 pm onwards, then the scenario might change.

The other release of the week is Khuda Haafiz Chapter 2 – Agni Pariksha. It is the sequel to KhudaHaafiz and stars the same actors who were there in part 1 – Vidyut Jammwal and Shivaleeka Oberoi. The sequel takes off from where the first part ended. Khuda Haafiz Chapter 2 – Agni Pariksha has created history as it’s probably the only film in the world, which is being released in cinemas, and whose first part was released on OTT.

Khuda Haafiz premiered on Disney+ Hotstar on August 14, 2020, and was one of the biggest films on digital due to the mass element. However, it has not enhanced the buzz for Khuda Haafiz Chapter 2 – Agni Pariksha in any way. Hardly, anyone is aware that it’s going to be released. Also, the first choice of the audience will be Thor: Love And Thunder. As a result, it’ll have a poor opening. Last week, Rashtra Kavach OM opened at Rs. 1.35 crores. It was a poor opening and if Khuda Haafiz Chapter 2 – Agni Pariksha can open better than this number, it’ll be a feat. The film will manage to get decent screens, especially non-2k ones where Thor: Love And Thunder won’t be screened.