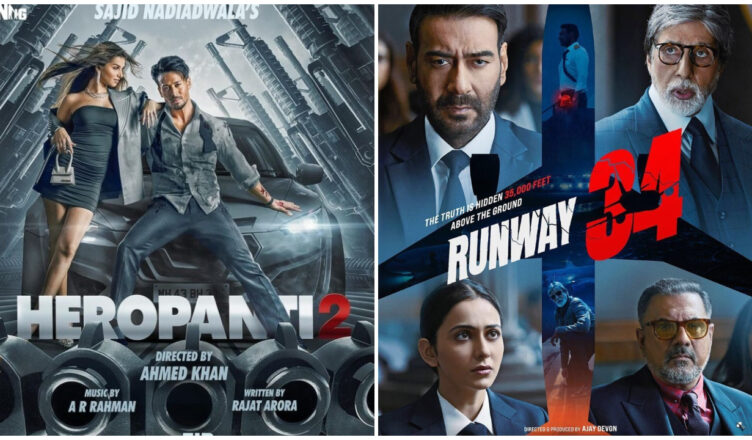 WILL THE EID RELEASES MANAGE TO WORK AT THE BOX OFFICE?

Since 2009, Salman Khan is known to release his films famously on Eid. Except for 2013 and 2020, there was no Salman release on the festival and this year, too, the superstar’s films couldn’t make it due to pandemic-related delays. As a result, Ajay Devgn and Tiger Shroff have taken up the coveted spot. Their films look interesting and can work though both films will also face their share of challenges.

Heropanti 2, starring Tiger Shroff, is the sequel to his debut film Heropanti, though the stories are not connected. Tara Sutaria is paired opposite him while Nawazuddin Siddiqui plays the antagonist. The film looks like a slick action entertainer. Tiger has a huge fan base, especially in the mass belts. As a result, a section of the audience is sure to watch the film in theatres. Moreover, the way his Heropanti dialogue ‘Choti bachi ho kya’ has gone viral and the way Tiger Shroff has taken it sportingly aided the promotions.

However, the first trailer was universally panned. The makers released a second trailer last week, which was much better. However, the damage has been done. Hence, though Tiger Shroff’s fans would flock to see the film, the others might adopt a wait-and-watch policy. Music, by A R Rahman, hasn’t worked. A film like this ought to have one chartbuster at least. Due to these factors, the film’s opening won’t be extraordinary. Heropanti 2 is expected to open at around Rs. 10 crore.

The other release of the week is Runway 34. It stars Ajay Devgn as the lead actor and director. Amitabh Bachchan, Rakul Preet Singh, Boman Irani and Angira Dhar also feature in this film which is an aviation thriller which is based on true events. The story is intriguing. The aircraft scenes should be thrilling and then there’s also the courtroom drama element. All these factors can make for a great watch. Moreover, Ajay Devgn and Amitabh Bachchan coming together is nothing short of a treat.

On the flipside, though the plot is exciting, the first trailer got thumbs down. Many viewers couldn’t understand what the film was all about. This film, too, had a second trailer and it was better than the first but still, it was just okay. Moreover, it doesn’t look like a film for Eid. One wants to see happy and entertaining films on festivals. Runway 34 doesn’t fit the bill. Also, the theme and treatment are such that it has no chance to work in single screens. As a result, its opening will be in the range of Rs. 3.50-5 crore.

Both films will also face competition from KGF – Chapter 2. It was released two weeks back and is still going strong. Since it was released in the holy month of Ramzan, several Muslim audiences haven’t seen the film. Eid falls on Tuesday, May 2. As a result, if Heropanti 2 or Runway 34 doesn’t get enough audiences in the weekend, the exhibitors might replace its shows with that of KGF – Chapter 2. This will prove detrimental to their overall box office collections. Hence, it’s crucial that Heropanti 2 and Runway 34 have to be well-made films in order to sustain.