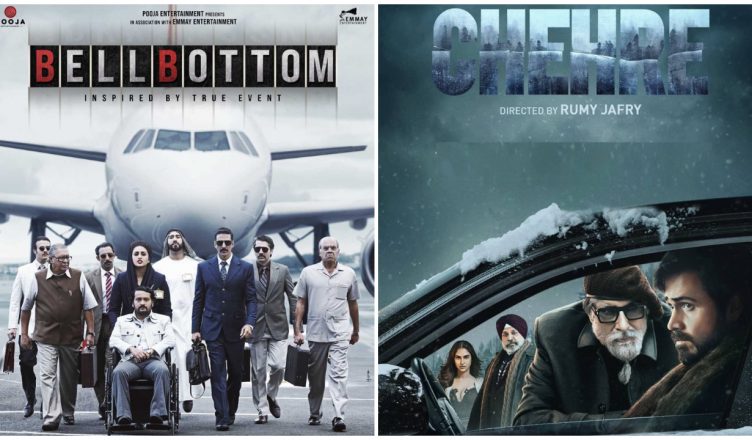 BELLBOTTOM FAILS TO SET THE BOX OFFICE ON FIRE; PRESSURE BUILDS ON CHEHRE

The first big Hindi film post pandemic, Bellbottom, finally released in cinemas last week, on Thursday, August 19. The crucial state of Maharashtra has been shut and hence, nobody expected huge numbers. The expectation was that it should open at around Rs. 5 crore. Shockingly, it took an opening of just Rs. 2.75 crore. Friday collections were the same while it collected Rs. 3 crore on Saturday. On Sunday, the film showed growth and earned Rs. 4.50 crore. The Monday collections were around Rs. 1.80 crore. The first week collections are expected to be under Rs. 20 crore and that’s not a good number even for its weekend collections, despite the absence of Maharashtra.

So what went wrong with Bellbottom? When a film is about to be released, the makers first need to create awareness. Viewers need to know that a particular film is releasing, that too in cinemas. And then they need to generate excitement. In the case of Bellbottom, the makers failed on both these fronts. On social media, they made noise but that’s not enough. On ground, many didn’t know Bellbottom is releasing, that too in theatres. A lot of exhibitors and single screen owners confirmed that viewers were unaware of its release on the big screen. Even when it came to creating excitement, the makers didn’t go all the way. The trailer was good but for many, it was not that appealing. Songs help a lot in adding to the buzz. But Bellbottom’s songs were forgettable. Akshay’s earlier film in this space, Airlift, had benefited as it had hit songs like ‘Soch Na Sake’ and ‘Dil Cheez Tujhe Dedi’. A hit soundtrack was missing here. Moreover, Akshay Kumar and his team barely did any television show appearances, something that works big time nowadays. They gave minimal interviews.

The underperformance of Bellbottom has given a much needed lesson to the filmmakers. Make sure the awareness of your film reaches to the lowest common denominator and that social media won’t do that for you. Sadly, the fear in the industry is that the debacle of Bellbottom would be used as an excuse by the filmmakers to further opt for the digital route to release their films. They’ll argue that viewers are scared to come to cinemas. They’ll ignore the fact that people are going to overcrowded restaurants and flights, which they wouldn’t have done if they were scared of the virus. The filmmakers will ignore certain trends in Bellbottom’s performance, that it grew well in Gujarat and other cities on Sunday. They’ll also ignore how the Punjabi film Puaada, released a week before Bellbottom, is doing extraordinary business.

Meanwhile, tomorrow, another Hindi film, Chehre, is up for release. It was initially scheduled to release on April 9, 2021 but was postponed due to the second wave. The trade is obviously scared about its fate because this is a much smaller film than Bellbottom. Hence, if Bellbottom couldn’t open well, what can one hope from Chehre? This thriller stars Amitabh Bachchan, Emraan Hashmi, Annu Kapoor, Dhritiman Chatterjee, Raghubir Yadav and Krystle DSouza. It also stars Rhea Chakraborty but she was shown just for a few seconds in the trailer. She is not giving any interviews as it can go against the film. Shockingly, Emraan has given very few interviews while Amitabh hasn’t till Tuesday August 24. The awareness for Chehre’s release, hence, is negligible. The opening will be less than Rs. 1 crore. One hopes it’s around Rs. 50 lakhs as anything less than that would be very disastrous.