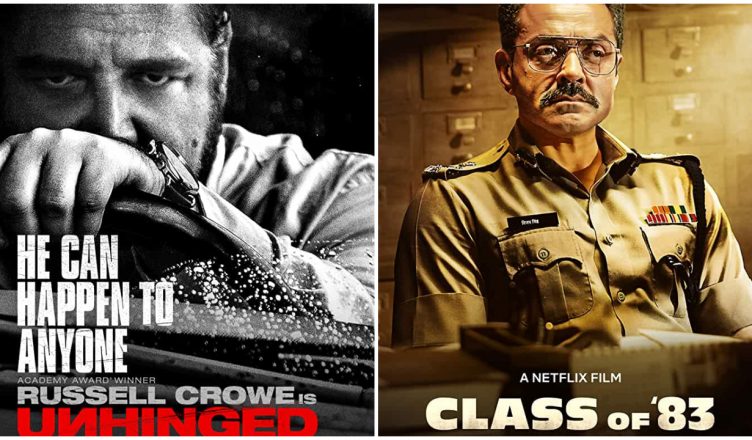 AS HOLLYWOOD GETS READY TO RELEASE ITS FIRST MAJOR FILM OF THE SEASON, BOBBY DEOL GEARS UP FOR HIS WEB DEBUT!

We had reported more than a month back that Hollywood is trying it best to release new films in cinemas of USA. Sadly, the Coronavirus cases increased and new hotspots emerged in the months of June and July. Hence, all the films that were to release in July got pushed. However, Unhinged, starring Russel Crowe is all set to release tomorrow in USA finally. It was to earlier release on July 10 and then got postponed to July 31. Interestingly, this film opened in international markets in July itself. It arrived in cinemas in Germany as early as July 16. It then released in Australia, Denmark, New Zealand and Singapore on July 30; in United Kingdom, Ireland, Norway and Poland on July 31, and in Canada on August 14.

But since it’s a Hollywood film, a release in USA matters a lot. Hence, the release of Unhinged in the major North American country is keenly awaited. What’s important to know is that cinemas in all cities are still not open yet. According to Variety, it releases in 2,000 locations, which is 1,000 fewer venues than normal. And most importantly, theatres in major markets like New York and Los Angeles are yet to resume. Also, theatres will have to operate with reduced capacity to maintain social distancing. Both these factors would be detrimental to it’s revenue earning.

However, at the same time, the competition is virtually non-existent. Films usually have to earn considerably in the first few weeks before another film takes over screens. In case of Unhinged, it has a clear one-week window after which films like The New Mutants, Rocket Hunter, Tenet etc are expected to release. But again, the usual flow of releases is missing and each film will get a chance to perform. That Unhinged has a smaller budget of $33 million also goes in its favour.

Till now, Unhinged has earned $7.7 million from international territories. In the first week of August, it was the top performing film in 11 countries – Australia, UK, Germany, Netherlands, New Zealand, Switzerland, Sweden, Ukraine, West Indies, Lithuania and Latvia. In many countries, footfalls have been encouraging. It also got the first mover advantage. Interestingly, the reviews are mixed and yet, audiences have been going steadily and this shows there’s a lot of pent-up demand. It remains to be seen how it performs in USA, the country with the maximum cases of Coronavirus. If Unhinged works here, it can give a boost to other filmmakers whose films are lined up for release.

Meanwhile in India, cinemas are still shut and tomorrow, Bobby Deol’s first web outing, Class Of ’83, is all set to release on Netflix. It is directed by Atul Sabharwal, who earlier directed Aurangzeb, and is produced by Shah Rukh Khan’s Red Chillies Entertainment. From the trailer, it seems like a gritty action thriller set in the 80s, a time when Mumbai was grappling with the underworld menace. Bobby seems in great form and it can make for a thrilling watch if made well.