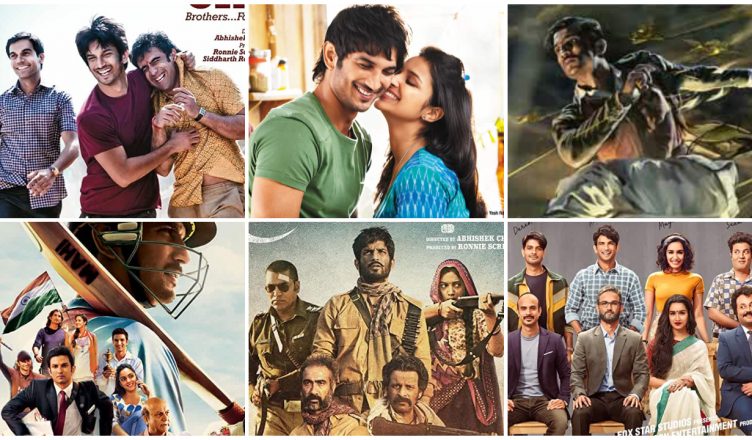 June 14 seemed like any other Sunday. But then, at 2 PM IST, news came in that prominent actor Sushant Singh Rajput has ended his life. It was a bolt from the blue and has led to brouhaha like never before. Instead of getting into it, let’s look at the track record of this actor at the box office.

Sushant Singh Rajput has been a part of 11 films till now. Of which, 9 have already released in cinemas. Drive released on Netflix while Dil Bechara, the official remake of The Fault In Our Stars, remains unreleased. Out of 9, 6 films were decent successes at the box office.

He started his career with Abhishek Kapoor’s Kai Po Che, released on February 22, 2013. Despite having newcomers and being a bit of a niche film, it created buzz among urban audiences. It opened at Rs. 3.68 crore which was great and it’s lifetime was Rs. 43.58 crore. The same year, he was then seen in Yash Raj Films’ Shuddh Desi Romance. This film created a bigger hype which led to a fine opening of Rs. 6.38 crore. Incidentally, it co-starred Parineeti Chopra, whose sister Priyanka Chopra’s film Zanjeer released on the same day. Zanjeer was more commercial and yet had a dismal opening of Rs. 2.84 crore. Shuddh Desi Romance meanwhile netted a lifetime of Rs. 46.26 crore. It became clear that in a span of 6 months, this newcomer had given two successive hits.

In 2014, he was seen in a 20-minute appearance in Aamir Khan’s PK. The actor rocked the show despite limited screen time and in fact, dominated the climax. It emerged as an all-time blockbuster, earning Rs. 337.72 crore.

Few months later, in April 2015, he acted in Detective Byomkesh Bakshy, directed by Dibakar Banerjee. Despite being very niche, Sushant’s presence helped the film get an opening of Rs. 4.01 crore. The word of mouth was positive but wasn’t enough to attract audiences in hordes due to it’s theme. Hence, it ended it’s lifetime with Rs. 26.21 crore. This was Sushant Singh Rajput’s first flop.

1 ½ years later, in September 2016, Sushant Singh Rajput bounced back with M S Dhoni – The Untold Story. It was based on the life of celebrated cricketer Mahendra Singh Dhoni. Despite having a run time of 185 minutes, it had created humongous excitement and had an opening of Rs. 20.13 crore! Sadly, the word of mouth was a bit mixed. Hence, it had a lifetime of Rs. 119.09 crore. Though this was a huge figure, the high cost of the film prevented it from being hailed a ‘Super Hit’. It was, at best, a hit.

In June 2017, he gave another flop in the form of Raabta. It was a much-talked about film thanks to Sushant’s pairing with Kriti Sanon. Songs worked but trailer didn’t. Hence, the opening was poor at Rs. 4.63 crore. Word of mouth was horrible and hence, collections came down in the weekend instead of increasing. Its lifetime was just Rs. 21.68 crore.

Almost after 1 ½ years, Sushant Singh Rajput’s Kedarnath released. The word of mouth was mixed but the opening was huge, at Rs. 7.09 crore. It’s lifetime was huge at Rs. 70 crore. 6 months later, he was seen in Sonchiriya. This was an odd man out. Films like Raabta and Detective Byomkesh Bakshy at least had some sort of respectable opening. Sonchiriya, meanwhile, opened horribly at Rs. 1 crore! There was no growth and the lifetime was a mere Rs. 5.63 crore! The word of mouth was excellent but the theme was such that audiences were just not interested.

Sushant Singh Rajput’s last theatrical release was Chhichhore. It was directed by Dangal director Nitesh Tiwari and produced by Fox Star Studios and Nadiadwala Grandsons. It opened at Rs. 6.92 crore which was decent. However, the word of mouth was crazy and hence, audiences went to see it in hordes. From Rs. 6.92 crore on Friday, it jumped to an insane Rs. 16 crore on Sunday! The numerous holidays in the weekdays along with public response helped the film immensely. It’s lifetime was Rs. 147.32 crore and hence, it emerged as a super duper hit!

Hence, one can see, Sushant Singh Rajput’s track record, despite flops, was quite good. Even opening day numbers were fine, though it was never record breaking in most films. Yet, the opening day figures prove audiences liked his work and came to see the films for him, amongst other reasons. It’s highly unfortunate that he’s no more today. If he was, he would have done quite well for himself and given us many more entertaining and meaningful films. RIP.