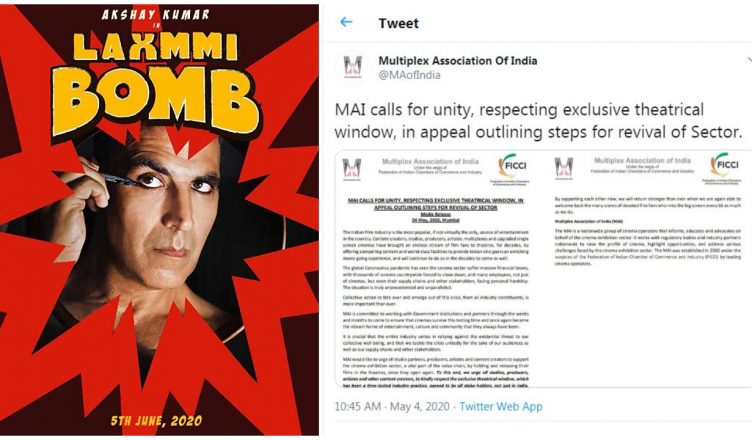 Last week, we discussed about the possibility of Akshay Kumar-starrer Laxmmi Bomb going directly on the digital platform, Disney+ Hotstar. It has already caused a lot of anger and despair, particularly among the exhibitors. They fear that this will set a dangerous precedent and other producers of biggies might also opt for this idea. The Southern filmmakers, meanwhile, are wary of doing so after Tamil Nadu Theatre and Multiplex Owners’ Association decided to not release any film of Suriya after his wife Jyothika decided to release her film Ponmagal Vandhal on Amazon Prime.

Thankfully in Bollywood, things haven’t gotten so ugly. However, it was necessary to make a point and hence, Multiplex Association Of India(MAI) has made an appeal to filmmakers to support the cinema exhibition sector by holding their films and releasing them in theatres once they’re opened again. They released a statement in which they have asked the filmmakers to “kindly respect the exclusive theatrical window, which has been a time-tested industry practice, agreed to by all stakeholders, not just in India, but even globally, for several decades”. They also emphasized that the “collective, social experience of watching films on the big screen needs to be preserved and it can be done so only with the collective support of all stakeholders”.

Many people within the industry are in favour of exhibitors and believe that one should wait for cinemas to open. Also, most films have the backing of a studio and hence, can easily hold on a film’s release for many months. Hence, it doesn’t seem justified for them to not care about one vital sector of the industry and opt for convenient direct-to-digital release. A clearer picture will emerge in the days to come.