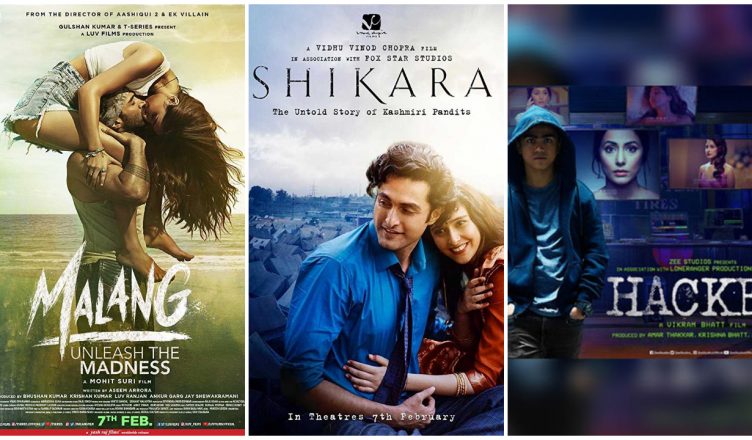 WILL MALANG BRING SOME SMILES FOR THE TRADE AND INDUSTRY?

The month of February is here and it’s completely dominated by small and medium-budget films. Tomorrow, as many as 3 films will hit theatres out of which the first hand has potential to click at the box office big time. My analysis:

MALANG: It is directed by Mohit Suri, who, in the past, has given super-hits like Aashiqui 2 and Ek Villain. Starring Aditya Roy Kapur, Disha Patani, Anil Kapoor, Kunal Kemmu and Elli AvrRam, it looks like a youthful romance-thriller. The trailer didn’t give out the story much and yet managed to enhance curiosity because of it’s style and youth appeal. Disha looks stunning in the red bikini and her sizzling scenes with Aditya have been well promoted by the makers. Music, however, hasn’t worked upto the desired level. Mohit Suri had become quite huge after Aashiqui 2 and Ek Villain’s super-success but then he followed it up with underperforming films like Hamari Adhuri Kahani and Half Girlfriend. As a result, his popularity went down. The buzz for Malang is there but is limited. Also, the adults-only certificate might add as a roadblock. But after the monstrous blockbuster Kabir Singh, which was also ‘A’ rated, this factor might not hold water especially if content is super-strong. The opening is expected to be around Rs. 6-7 crore, with chances of it hitting the Rs. 8 crore mark. If reports are positive, it can have a healthy weekend and can earn well in the weekdays as well, when the college crowd would come in abundance, taking advantage of cheaper ticket rates. A bad word of mouth can seal the film’s fate in the weekend itself.

SHIKARA: It is directed by Vidhu Vinod Chopra and is a rare film on the plight of the Kashmiri Pandits exodus. Directed by master director Vidhu Vinod Chopra, it marks the debut of Aadil Khan and Sadia. The film was shot in 2018 but took time to be completed and released. A R Rahman has provided the background score. The trailer is impactful but at the same time, it’s a film which is devoid of commercial elements or exciting star cast. Few weeks back, a statement of Vidhu Vinod Chopra led to controversy but it didn’t help in adding to the film’s hype. The opening of the film will be very poor of around Rs. 25-40 lakhs range. The makers can only hope that Shikara goes the The Tashkent Files way. That film opened at Rs. 35 lakhs but was loved so much that it ended up doing a business of Rs. 16.97 crore. This will be possible only with insane word of mouth. If reports are bad, then the film might not even collect Rs. 2 or 3 crore in its lifetime.

HACKED: It is directed by Vikram Bhatt and marks the debut of the popular TV actress Hina Khan. Rohan Shah, Mohit Malhotra and Sid Makkar also feature in this flick. As the name suggests, it deals with cyber crime and is a story of a young boy who goes crazy when he falls in love with an older woman. The premise is very relatable and much needed in today’s times. But the trailer suggests that it’s more of a sleazy film, designed to please the front benchers. Songs haven’t worked at all. The buzz for the film is limited and it’ll also open in the same range of Rs. 20-30 lakhs. It’ll be a competition between this film and Shikara as to which will open better.